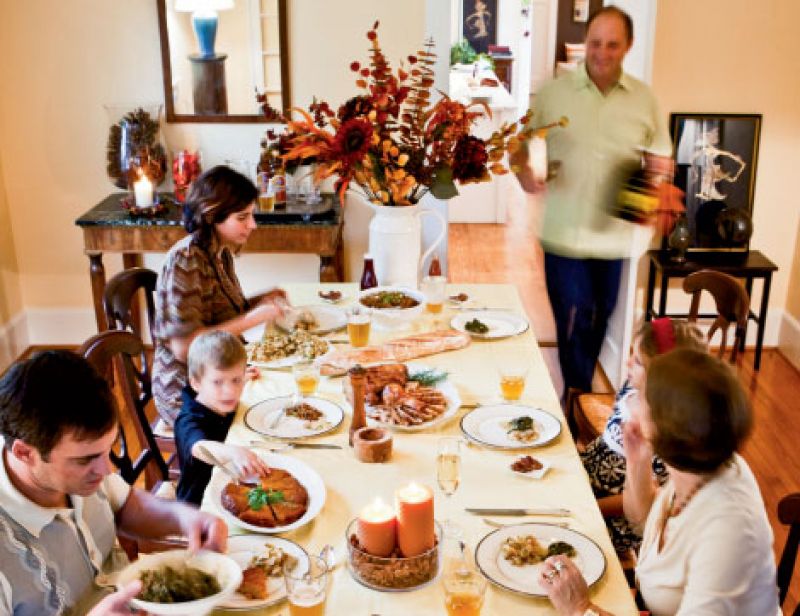 As a child, long before opening his acclaimed Southern restaurant, Hominy Grill, Robert Stehling would help drag a big, wooden picnic table indoors for Thanksgiving dinner. His mother grew up on a farm, so his family—Grandma, Pa, and the rest of the bunch—enjoyed straightforward dinners, usually turkey, green beans, sweet potatoes, and lots of pies and cakes for dessert.

His parents kept an organic garden at their Kernersville, North Carolina, home, supplying a fresh bounty for the Stehling children: Wendy, Robert, and John. Their mother cooked—always—until one Thanksgiving when Robert managed to nudge her out of the kitchen. He was back home from his first restaurant job at Crook’s Corner in Chapel Hill, a cathedral of Southern cuisine, and he couldn’t wait to show off. “He wasn’t frying baloney anymore,” laughs John. “We all kind of sucked it up like sponges: my dad, me, and even Mom.”

Later, working in New York, Robert would play host to the “restaurant orphan club,” those who, like himself, had no money to return home for the holidays. The menu: occasionally turkey mole, but mostly turkey gumbo left to warm all day on the stove. “Everybody would bring something—usually cheese or booze,” Robert says with a grin.

He’s come a long way since then, establishing a nationally acclaimed Charleston institution and winning James Beard Best Chef: Southeast in 2008, but those simple occasions certainly made their mark as the young chef learned to work within his means. “Be smart, be grateful, make the most of what you have, and borrow what you may,” he says. Today, those tenets continue to hold true as Robert, his wife, Nunally, and their seven-year-old daughter, Carson, welcome John and his wife and children into their Wagener Terrace home for a relaxed, family-style Thanksgiving supper.

The meal brings John, wife Julie, and their young sons, Hank (age five) and Milo (three), to town from Asheville, where the couple owns Early Girl Eatery, a progressive restaurant named after a popular hybrid tomato. Known for its reliance upon locally raised produce and vegetables, Early Girl deviates from the usual Southern repertoire, offering vegan burgers and baked tempeh alongside shrimp and grits or biscuits and gravy.

Helping to keep the dinner economical, John and Julie unpack tidings from the North Carolina mountains: cabbage grown at Camp Celo in Burnsville and honey crisp apples from Hendersonville, the same fruit bought by the bushel for use in applesauce and apple chutney at Early Girl. “It’s nice stuff with the fall coming on,” says Robert. “The cabbage almost has a woodsy flavor to it, and the cool air really brings out the apples.”

The group settles in for appetizers: table water crackers layered with goat cheese and homemade hot pepper jelly. The warmth from the ancho and chipotle chiles balances the cheese in this creamy, robust snack that even draws the attention of young Milo.

John washes the oysters purchased from Crosby’s Seafood before passing them to his brother, who with the skill of a cat burglar easily unlocks a dozen or so. Brackish, mild, and buttery, the oysters contrast nicely with the sweet heat of the pepper jelly. Since they’ve opted for less expensive crackers, greens, and turkey, the Stehlings splurge on the selects and a bottle of sparkling wine to accompany the appetizers. “A glass of champagne and a couple of oysters go a long way to making you feel like you’re putting on the ritz,” says Robert.

“Turkey and bacon make a good combination,” notes Robert, “almost like a club sandwich.” Grilling is an apt method for preparing the bird, which emerges perfectly golden in hearty portions that serve as the feast’s showpiece. The meat is sliced to reveal the stuffing, and the chef carries the smoky-scented turkey to the table, where his family has gathered in bare feet and socks. Their Thanksgiving meal, like most, is a tribute to convention and comfort. And though he has slightly reinvented the turkey, Robert stresses that keeping with tradition is an important part of the celebration.

Robert recently rekindled a love affair with his cast-iron skillets, returning to the frypans after many moons apart. He cooks the apples and cabbage together, creating a sort of hot sauté salad. A quick sear gives the dish its crunchy, crispy texture. He also fashions his sweet potato pone in a skillet, the potatoes peeled and grated to resemble matchsticks.

The dirty rice recipe has been passed down from the late Bill Neal, Robert’s renowned boss at Crook’s Corner. As for the mustard greens, Robert dresses them up his favorite way: with salty pork, ample chicken stock, and heavy cream for deep, essential flavor, simmering the greens until they are pillowy soft.

see all recipes below...

Robert was raised with a sweet tooth, his mother being a whiz with cakes, pies, and goodies. Today, Hominy Grill is known for its buttermilk pie, a dreamy dessert with custard and nutmeg. Thanksgiving at the Stehling home, like in Kernersville, also necessitates cake. Today, he has baked a triple-layer carrot cake with a filling that oozes from between layers and spills onto serving plates. Indeed, the Stehlings’ cake runneth over.

We give thanks to Hominy Grill chef Robert Stehling for successfully dishing out a Thanksgiving feast for seven on a budget of $105. 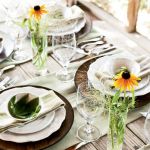 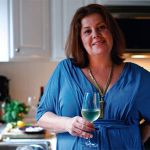