Nashville on Fire
December 2013
PHOTOGRAPHER:
Peter Frank Edwards
We’re up for a taste of Sean Brock’s Nashville, and the whole city feels like it’s smoldering with creative energy—for food, style, and design 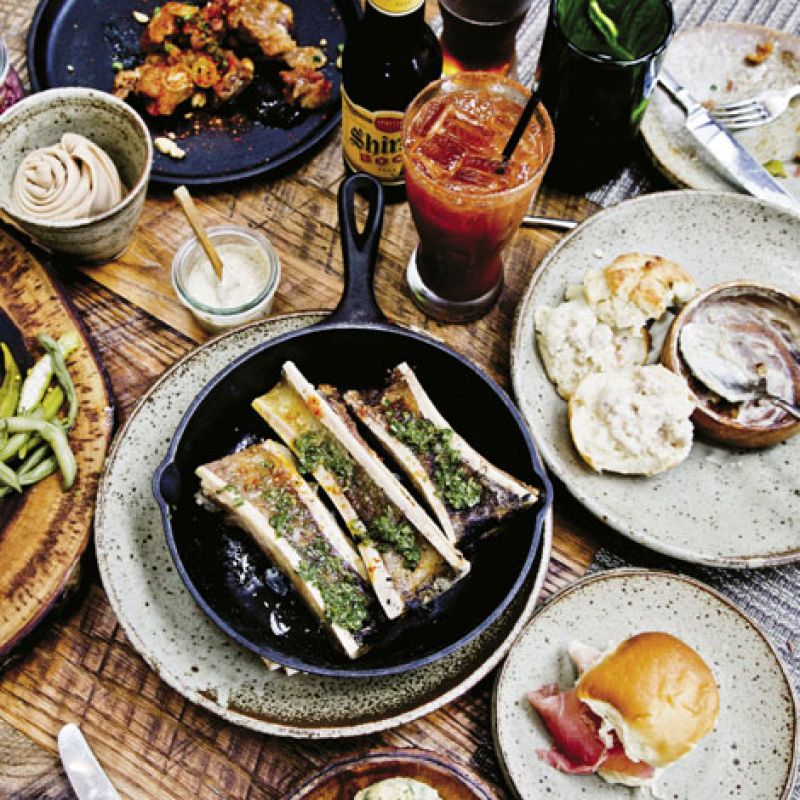 “Embers,” says Sean Brock. He wouldn’t want to have a kitchen without them. The deep-thinking chef with the devilish smile is leaning on his long-bed truck outside of a Nashville mansion—the historic house with triumphal arched porch openings is now home to the Tennessee cousin of Charleston’s Husk. Brock snuck off earlier this year to open the Nashville version, and the restaurant served up its first ember-fired meals as the Lowcountry was knee-deep in Spoleto.

From this Husk, situated on a hilltop, the Music City rolls out below to the Cumberland River and the lights of the honky-tonks on Broadway. Every guest walking across the restaurant’s wood floors passes the iron racks of the busy kitchen’s open hearth. Flames lick the grates above, and pans of bone marrow, chicken, and sweet corn—some skillets perforated to allow direct contact with smoke and heat—are set right on the red-hot coals. A huge portrait of Willie Nelson in braided profile dominates one wall. It’s a fiery kitchen in the heart of the house. “Like the embers in Rodney Scott’s pit,” says Brock, referring to the all-night wood fires and shovel-loads of coals used for cooking whole-hog barbecue at Scott’s Variety in Hemingway, South Carolina.

That’s the heart-and-soul-driven Brock we’ve gotten to know in Charleston at McCrady’s and Husk and at farm dinners out on John’s and Wadmalaw islands. He’s always fast to give credit to the best cooks and makers of the world. Pretty gracious for a guy at the top of the ranks himself: James Beard accolades and TV limelight, including the latest episodes of The Mind of a Chef on PBS. But for a few days, Brock is game to put aside other projects that he’s got cooking for a romp around Nashville.

HUSKER-TWO
By the time we’re all in the Husk parking lot talking about embers, I’ve got a belly full of brunch, including the black-pepper biscuits with cream-rich, sausage gravy; hot griddle cakes of Carolina Gold rice spread with pimiento cheese; tender pickled okra; and Gullah fish-head stew that Brock says he concocts slowly in a roux with tomatoes, chilies, garlic, onions, puréed bay leaves, and benne oil. Nothing overcomplicated here, just delicious. Customers in denim or dresses—a few women with floppy hats askew—have wandered off into the late afternoon. (Among the brunch crowd were Johnny Iuzzini from Bravo TV’s Top Chef Just Desserts and chef Erik Anderson from the raved-about, 32-seat Nashville restaurant, Catbird Seat. They’d both been sitting at the next table tasting similar platefuls, and drinking Cheerwine.) It’s early September, and hickory smoke hangs in the Tennessee heat. We’re inclined to hop in Brock’s truck, but the 1983 Chevy with bench seats won’t start. Our rented sedan will have to be our ride, and we let Brock suggest where we’ll cruise to next.

Nashville is a city this chef knows well. Before he landed at McCrady’s and then Husk on Queen Street, he worked in its kitchens in his twenties, namely the Capitol Grille at the grand Hermitage Hotel. He says that when the idea for another restaurant came up after Husk’s fast success in Charleston—three-week waits for reservations, remember?—he knew he wanted his next venture to be in Nashville, for the advantages of easy access to the lush Tennessee farms that could provide the ingredients, along with ’round-the-clock diversions like fried bologna sandwiches and cans of cold Busch beer at Robert’s Western World.

Brock orders both as soon as we get to the famous live music bar, our next stop. “The secret is that the bologna is sliced so thin, and they fry each slice and then reassemble it,” he says, admiring the white-bread sandwich from the side after each bite. Meanwhile, a young woman with a twang in her voice is singing the Nashville classic, “Hey, bird dog,  get away from my quail,” and the narrow dance floor in front of the stage starts filling.

The next band has a stand-up bass and a Stray Cats sound that makes you want to stay, but we can’t stop now. Brock suggests a late supper at Rolf and Daughters. Getting there for some “modern peasant food” is something I’d hoped to do in Nashville. Bon Appétit had just named it one of the top-five “Best New Restaurants of the Year,” declaring that chef Philip Krajeck was “put on earth to make pasta.” We feel lucky to get in. Brock is friends with the servers and Krajeck and immediately places an order for “the pastas.” Within minutes our table is laden with big bowls to share—of all five pasta dishes on the day’s menu—in shapes and ingredient combinations I’ve never seen. In the room of long wooden tables and softly lit bulbs hanging at varying heights, we’re stabbing our forks into twists of farro gemelli (spelt flour pasta) with kale and hen-of-the-woods mushrooms; rustic spaghetti with octopus and a chili kick; and the squat, ridged tubes of a black, squid-ink canestri pasta with shrimp and pancetta. The blond chef sits with us for a few minutes, pleased to see all the bowls being passed around. “This is the way I always hoped it would be,” he says.

MAKERS & MICHELADAS
Like life itself, this trip is not all about food. With a penchant for work shirts, Imogene + Willie jeans (the Nashville brand makes jeans for the Husk crew), and armfuls of tattoos—a newly inked cardinal, the state bird of Virginia (his home state), is still tender on his forearm—Brock’s wider interests spin toward culture, style, and design. We sample some of those Nashville highlights, too. The next morning’s first venture is to Marathon Village, a very cool reuse of the early-20th-century factory for Marathon Motor Cars. The four-block building has been renovated into studios for artists, a coffee shop, offices, galleries, a progressive radio station, and a distillery. In the natural light of tall, steel-framed windows, we find Otis James and his sewing crew using vintage Singer machines to make bow-ties, caps, handkerchiefs, and ascots in handsome tweeds, tiny floral patterns, and soft linen. Slim and sincere with pale blue eyes, James bicycled across America before coming to Nashville to sew and design. Here, he says, “there’s a sense of community among the creative businesses… and if you have a good idea, there aren’t a million people already doing it.” James adds that  he’s just hired more assistants to sew for his growing line of tie-wear that now also includes flowing “lady ties.”

Down a few hallways is the workshop of belt- and bag-maker Emil Erwin—Emil’s last name is actually Congdon, and Erwin is the Tennessee town where he’s from. Congdon recognizes he’s part of an “explosion of craftsmanship” in Nashville. Many of the local artisans are in their twenties and thirties, and he works with his wife, Leslie, who happens to have their toddler son in tow this day. The room, rich with smells of canvas and leather, is filled with rolls and scraps of each, benches lined with tools, and buckles in chrome and brass. While I admire the stitching and sturdy designs, Brock orders a custom-made satchel as an anniversary present for his wife, Tonya. She’s a hands-on maker herself, by the way, and recently launched her own letterpress enterprise, Winding Wheel Press, in Charleston.

It’s energizing to glimpse Nashville’s artisanal side, and Brock suddenly has an idea for another stop, this time for chocolate craftsmanship. He makes a call, and within a few minutes we’re standing in a near fog of cocoa aromas at Olive & Sinclair Chocolate Co. Founder Scott Witherow, who worked several stints in Brock’s kitchen at the Capitol Grille, shows us the cocoa bean roaster, winnower, and the stacks of just-wrapped bars of Double Chocolate, Salt & Pepper, and Buttermilk White. Near the boxes of Bourbon Nib Brittle, he shows us a machine from the 1910s that features a rotating 2,500-pound stone wheel to press out the cocoa butter. The whole production is based on “antiquated and inefficient techniques,” he modestly explains, and it’s obvious this guy in round-rimmed glasses and a “Chocolate stone-ground in Nashville” T-shirt loves every minute of the work—and the results.

Everyone’s hungry now. We start with foam trays of fried chicken coated in hot pepper at Bolton’s Spicy Chicken & Fish, one of Nashville’s cinder-block meccas for heat. “Hot chicken is like a religion here,” Brock says as he sweats through two pieces and three iced teas. While it’s not the hottest any of us has ever had, it’s fried just right. He studies these Nashville specialties like a scholar. Back in the car, Brock tells us about the personal taqueria tour he’s been making, looking for the city’s best tacos and micheladas. That’s our cue to drive several miles out of downtown to try one of his favorites, El Tapatio on Nolensville Pike. It’s the kind of taqueria where the chicken, beef, tripe, and chorizo are cooked outside on the grill, and he’s excited to see that the barrel smoker out front is lit. “That smells like freedom,” Brock says when the smoke hits us. This is good. Tortillas arrive with grill marks, and the micheladas are served in stemmed glasses with fat globes rimmed with salt and chili flakes and bottles of Tecate still upside down in Clamato juice and limes.

LP PARLOR FINALE
With stomachs feeling the fire on the return drive downtown, we turn up the volume for another song by Jason Isbell, the Alabama-born singer-songwriter with Elvis-slicked hair who’s one of Brock’s favorites and obviously on high rotation with Nashville radio stations. Here in Music City, you can never forget that music is an elevated, living thing. “It’s everywhere,” Brock says, “in dive bars and a hundred house parties every night.”

The next day we go to more places where music, including fresh vinyl recordings, is revered. The Barista Parlor is essentially a coffee shop, but it feels more like a style collective. While LP records play, customers in the wide garage bays sip poured-over coffees and sit on stools fashioned from whiskey barrels. Employees in work aprons move with a gentle quietness that seems just right for easing into a drowsy morning. And while waiting for orders of biscuits and local jam, you can muse about the parlor’s nautical murals and vintage motorcycles with swooping lines.

A more raucous stop is Thirdman Records. The studio of musician Jack White has a small and curious store that’s a tribute to vinyl, selling record players, vinyl singles, and LP records. Visitors can strum guitars and thump cymbals here, and for $15, you can even cut a record in a booth. (Ask photographer Frank Edwards to hear his spontaneous, bluesy track.)

In the racks, I find a 45 made at the studio this year by Shovels & Rope. Along with the purchase of an Emil Erwin belt, that record becomes my favorite Nashville souvenir and lends another Charleston (by way of The Pour House) connection. “It’s impossible not to love Nashville right now,” Brock had said early on in the trip, and I can’t help but agree. It’s a great, maybe even a proud moment, to see Brock and the Charleston-born Husk add to the simmering, stylish Nashville scene—embers and all.