What Happens on Folly...

What Happens on Folly...
June 2012
WRITER:
Stratton Lawrence
Let loose on the beach known for its music scene and carefree attitude 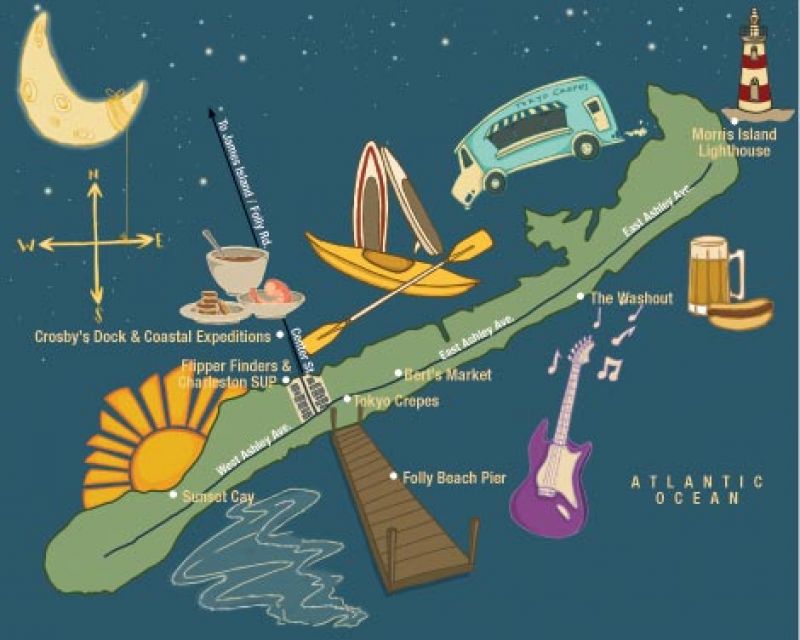 Although its name is derived from the numerous islands along this stretch of marsh dotted with dense foliage, Folly Beach lives up to its moniker through its fun-loving locals bent on preserving their little world without worries. Artists and musicians still flock to the island, one of the last outposts of affordable beach rentals for the bohemian set. Night owls thus enjoy a constantly refreshing wealth of entertainment options. With more than a dozen restaurants and music venues in walking distance along Center Street, it’s possible to take in a variety of tunes—from hard rock to bluegrass to beach music—in an evening of bar and pier hopping.

All the fun of Center Street is tucked neatly in the middle of a six-mile stretch of otherwise tranquil sands and woods. Head out to either end of the island after dark and find yourself far removed from city life (yet mere minutes away from a bar tap to refill your cup).

Full Moon Kayak/SUP Tour
Each month on the full moon, the flat horizon provided by the Lowcountry’s salt marshes offers the chance to witness the sun setting and the moon rising simultaneously. There’s no better way to take it in than on the water, and Folly offers several options for getting out there. Paddle at dolphin-eye level in a kayak or get a new vantage point on a stand-up paddleboard (SUP). Flipper Finders kayak outfitters and Charleston SUP Safaris leave directly from the boat landing on Folly Beach, while Coastal Expeditions sets out from the dock at Crosby’s Seafood on Folly Road. Catch a summer evening with a soft breeze (keeping bugs at bay), and you’ll find yourself immersed in twilight tranquility.


Cocktails Under the Stars
Tucked away from the tourist crowds at the far end of West 9th Street, Sunset Cay Marina and Yacht Club remains the locals’ favorite for evening libations. Daily catch specials (we love the grouper sandwich) are embellished by the ambiance of eating in a dock building perched above the flowing Folly River. From the porch, there’s a clear view to Bird Key and Kiawah Island, and of course, the best sunset view in town. Kick back with a cold one and conjure that old dream of living aboard a sailboat.

Cast (or Shag) From the Pier
Extending 1,045 feet into the Atlantic, the Edwin S. Taylor Pier (the East Coast’s second longest) allows anglers the chance to drop bait far past the breaking waves. Sea trout, black drum, and king mackerel are regularly reeled in, and the pier stays open until 11 p.m. every night during the summer. Permits, bait, and even rod rentals are available at the on-site Gangplank Gift & Tackle Shop.
Once or twice a month, the pier comes to life with Moonlight Mixers, when DJ Jim Bowers of 1340 AM, The Boardwalk, spins beach tunes and couples of all ages come out in force to shag over the water, dancing the night away just as they’ve done for generations. It’s the best locale around for sharing the state dance with a partner and having a quintessentially Folly experience. Upcoming Moonlight Mixers: Friday, June 1 & 22, 7–11 p.m. $10, $8 Charleston County resident
● Folly Beach Fishing Pier
101 E. Arctic Ave., (843) 588-FISH
ccprc.com

Rock Out ’Til Closing Time
Among Charleston’s beach towns, Folly is known for the liveliest nightlife. On any given weekend, music lovers can hop between bars, catching seven or eight different acts over the course of an evening. Loggerhead’s boasts plenty of room for dancing, even when popular groups like The Dubplates and the Folly Beach Reggae All-Stars take the stage. Around the corner, Surf Bar always satisfies the Americana crowd, booking bluegrass and folk-rock groups that feed off the intimate energy of the cozy wooden bar and patio. Out on Center Street, the Drop In Deli tops the list for a nightcap, with both solo acts and rock bands cranking it out until the lights come on for last call.

Late Night Grub at Bert’s Market
There is perhaps no institution more defining of the Folly vibe than Bert’s Market, the 24-7, 365, one-stop shop that still slings 75-cent hot dogs at all hours of the day and night. The grocery/convenience store/island hub has turned a corner lately, offering an organic section and craft-beer growler taps, as well as Folly people-watching at its finest—especially late at night.

Crosby’s Seafood Friday Night Dock Parties
It’s worth a special trip for these irregular, right-on-the-water feasts at Crosby’s on Folly Road. Look for the sign outside announcing a party, usually displayed about a week in advance, or simply call and ask—there’s no rhyme or reason to the dates apart from Fridays when the mood feels right. Once you’re there, it’s hard to beat the homemade fish stew, shrimp plates, and crab cakes served nearly straight off the boat.

Tokyo Crepes at 2 a.m.
It’s hard to find good food anywhere in the wee hours, but Folly’s semi-permanent food truck, Tokyo Crepes, fills that void during the summer. Parked on East Ashley Avenue between Center Street and Bert’s, the friendly proprietors dish out their sweet and savory treats until the last bar-goers have staggered by on their way home.

Blu: Head to this sleek, beachfront retreat in The Tides hotel for fine dining (try the lump crab cakes with black-eyed pea succotash and grained mustard) or go super casual to the outside bar for snacks and tiki drinks. 1 Center St., (843) 588-6658, www.blufollybeach.com

Surf Bar: Look to the daily specials board at this Costa-Rica-meets-down-home-Americana haven where burgers, chicken, and hangar steaks are all cooked to perfection over a wood-fired grill. 103 W. Cooper Ave., (843) 588-2009