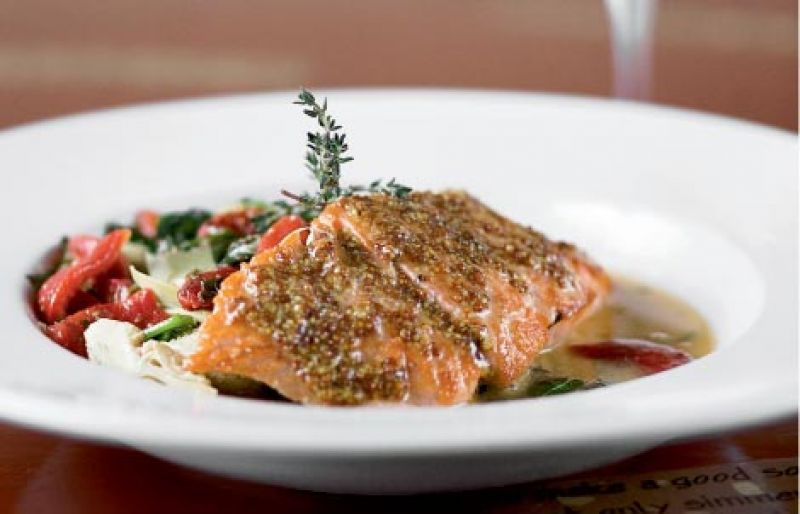 For guests at downtown’s Five Loaves Café, the entertainment begins at tables decoupaged with phrases that express the owners’ philosophies about life and food. Auguste Escoffier claims a spot with his observation that “the greatest dishes are very simple dishes,” a description that indubitably satisfies the steady stream of customers who can be found here on a daily basis. Thanks to loyal patronage, this cheerful place has owned its little corner since opening the doors in 2002. The culinary creator-in-residence is chef-owner Casey Glowacki, whose trademark soups, salads, and sandwiches reflect years of inspiration and experience fine-tuned under the tutelage of mentor Sal Parco and others. Co-owner and business manager Joe Fischbein engineers consistently stellar service and has facilitated the expansion of sister restaurants in Mount Pleasant and North Charleston, formerly in Millennium Music on King Street, and most recently at West Ashley’s Citadel Mall. Like the menu, the café is fun, colorful, and warmly casual, and the spirit is lighthearted, reflective of the college crowd who frequents the establishment alongside value-conscious food lovers of all ages. A kitchen in the heart of the house divides a smaller room with a popular community table from the main dining area, where the rich pomegranate-colored walls boast the specials boards alongside giclée prints and paintings by local artist Paul Silva. At original conception, the menu was developed around Glowacki’s love for good soups made daily—a passion he developed while attending New England Culinary Institute, where students spent time foraging for fresh produce. The offerings are vegetarian-friendly, often including bowlfuls of tomato tarragon, wild mushroom, and potato flavored with fresh herbs and cheeses. To complement the soups, Glowacki added generous salads—served with creative housemade vinaigrettes and dressings such as walnut and shallot, and sweet basil and honey—as well as sandwiches available on freshly baked breads, tortilla wraps, baguettes, and croissants. While Five Loaves served only lunch in the beginning, persistent requests resulted in the addition of dinner. After 5 p.m., the menu expands to include appetizers, pastas, and entrées featuring ingredients like steamed mussels, Rio Bertolini’s locally made pastas, risotto of the day, chicken, and fish. A recent dinner began, in usual fashion, with fresh-baked focaccia and olive oil splashed with balsamic vinegar and herbs. As regular lunch visitors, we decided to focus on the dinner side of the menu, choosing first courses of wild mushroom risotto and grilled eggplant. Conceived of and prepared by lead chef Matt Haneline, the risotto was cooked to perfection, highlighting the earthy goodness of wild mushrooms, bacon, and duck confit served with fresh parmesan. The delicate grilled eggplant was layered with sliced tomatoes, herb goat cheese, caramelized onions, and fresh spinach. Finished with a pop of firecracker tomato chutney, it was a glorious healthy alternative to the traditional eggplant parmesan. A tender salmon filet with whole-grain mustard and honey glaze was the first of our entrées. Served on a bed of delicately braised spinach, tomatoes, roasted peppers, artichokes, and potatoes, it featured a lemon and fresh basil butter broth that melded beautifully with the glaze and vegetables. Homemade spaghetti tossed with slow-cooked tomato sauce included traditional meatballs prepared with care and integrity, the ultimate reward on a cold winter night. Our dinner concluded with old-fashioned icebox coconut cake that brought exclamations of delight even though it was one of the few items not made in-house. In the words of one frequent Five Loaves diner, “It’s the place I always want to go when I’m feeling hungry and broke because regardless of what I order, I leave feeling like a rich man.” Five Loaves Café 43 Cannon St., (843) 937-4303, www.fiveloavescafe.com Monday-Saturday, 11 a.m.-9 p.m. (dinner served after 5 p.m.) Choice of two from soup, salad, & sandwich: $7.75 Average dinner entrée: $12.50