Fall for Adventure
October 2010
WRITER:
Sandy Lang
PHOTOGRAPHER:
Peter Frank Edwards
Autumn just may be Charleston’s finest season, when temps start to cool and skies are bright and clear—the perfect time for Lowcountry excursions. So get out and enjoy the days! We’ve made it easy with a sampler of three cool fall adventures—hopping on horses, pedaling through the forest, and cruising the salt creeks—including how to get there and where to stop for food and drink along the way 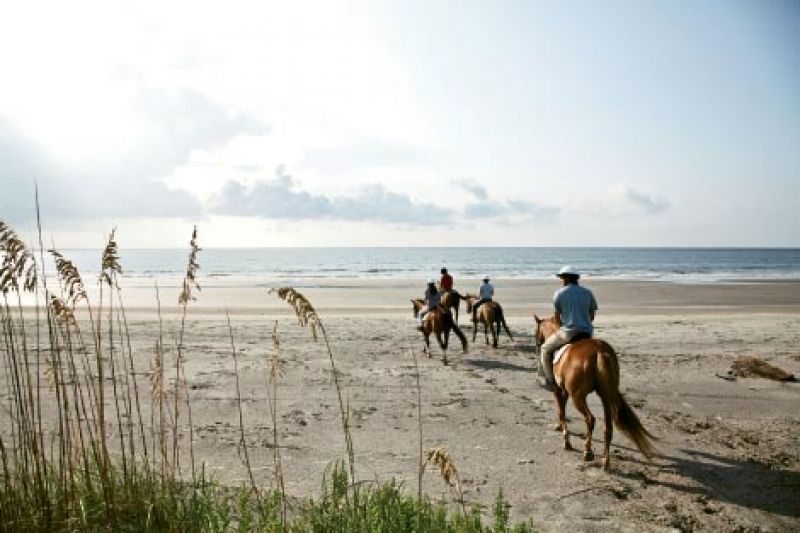 An hour past dawn, the horses stepped off the trailer and onto the sand at Seabrook Island, ears twitching. Three riders and a guide saddled up and started off down the path to a wide beach nearly empty of people and stretching for miles.

The guide, Seabrook Equestrian Center manager Ben Doyle, had brought Fred out from his stall for himself. “It’s me and Fred most every morning,” he said, patting the brown quarter horse. Once on the wide beachfront, Ben gathered his charges at the edge of the lapping waves for instruction about the hour-long ride: where they’d go, how they’d stick together, and what they’d encounter along the way. It was a gentle morning of sea oats, sand dunes, and blue skies. Even the wave action was soft and quiet.

The riders and their horses—Blue Eyes, Lacey, Scout, and Fred—fell into a canter and rode into the distance, clipping across wet sand and following the shore around the southern end of the island. The few walkers and joggers didn’t startle the horses; all carried on, unfazed. “These are very special horses,” Ben explained later, back at the paddocks and barns. “They take care of riders of all skill levels.”

Two of that morning’s three guests had saddled up on the beach previously, including a 12-year-old Nashvillian who was visiting with her family for the second time. (The beach rides are for advanced riders—those with two to three years experience and good control at a walk, trot, and canter. Beginners can try out the reins on trail rides through the woods and by marshes and creeks.)
The center has 13 horses on hand for rides and lessons. Another 40 or so are boarded there, so touring the facility’s barns, riding rings, and pastures is a treat in and of itself. The horses are accustomed to people and activity, often hanging their heads outside of their stalls.

Blue Eyes, who really does have ice-blue peepers, is 15 years old and a favorite of children. “He’s great for young kids,” said Ben, noting that the American paint with the white blaze across his face has a perfect temperament for guided rides. “Most of all, he’s very forgiving.”

THE OUTING: A morning horseback ride on the beach at Seabrook Island

GET THERE: Seabrook Island is about 20 miles southwest of Charleston. Follow Highway 17 South to Folly Road, and then Maybank Highway to Bohicket Road/Betsy Kerrison Parkway, which ends at Seabrook Island.

Two-wheeling through the Francis Marion on the Palmetto Trail

If you’re the first in a line of cyclists on the Awendaw Passage of the Palmetto Trail, you have the best chance of seeing an owl or a deer before the other riders catch up. Then again, you also might get a mouthful of spiderweb, if no one else has passed through that day.

But hey, this is the nearly 259,000-acre Francis Marion National Forest. The trade-off for an occasional spiderweb is fresh air, peace, and sweeping views of tidal Awendaw Creek and the marsh beyond. It’s common to hike or ride for much of the seven-mile stretch of the Awendaw Passage without seeing another person. I’ve been out there in all seasons, and for some reason, often in rain. Puddles can gather fast in places, so if it’s rained recently, you’ll likely get muddy.

The trail is perfect for hikes in cooler months, when the mosquitoes and deer flies aren’t out, and the mountain biking is pretty good any time of year, as long as you’re pedaling faster than any pests. On an outing last year with friends and their six-year-old daughter—yes, in the rain—we all had fun watching tiny fiddler crabs along the creek and then picking a few sea beans for a snack.

From Buck Hall Recreation Area south of McClellanville, where you can also camp, picnic, or launch a boat onto the Intracoastal Waterway, the trailhead is at the north end of the parking lot. It begins on a wooden boardwalk that soon transitions into a dirt path. Plastic grating is used in areas that often get wet. The grates give traction, but are narrow, so they can be tricky when pedaling. The trail eventually crosses Highway 17 and connects with the Swamp Fox Passage north of Steed Creek Road.

You can also park and pick up the trail at the Awendaw Canoe Launch Trailhead on Rosa Green Road. Heading toward Buck Hall from this location gives you the best water views right away, leads across several wooden bridges, and then dips into the woods.

In addition to the bike ride itself, the drive there and back adds to the excursion, especially if you make a stop or two. Along the way is quirky Jack’s Cosmic Dogs at the northern end of Mount Pleasant. In Awendaw, Sewee Outpost sells gasoline, serves hot meals, and has a large shop stocked with outdoor clothing, fishing tackle, and basic groceries. Nearby See Wee Restaurant is known for its soft-shell crabs (in season), local shrimp, and sides like collard greens and fried okra.

After pedaling, you might want to stop at the Sewee Visitor and Environmental Center on the ocean side of Highway 17 North. There you can find out about other forest trails, even while the mud is still drying on your bike tires.

THE OUTING: Mountain biking in the no-mountain Lowcountry

WHERE: Awendaw Creek segment of the Palmetto Trail, the “sea” portion of the state’s mountains-to-the-sea trail. Find a map at www.palmettoconservation.org/awendaw.asp.

GET THERE: Drive north on Highway 17 for about 30 miles to the Awendaw Canoe Launch Trailhead, accessed from Rosa Green Road on the right. The Canoe Launch sign and right-hand turn are past the intersection with Steed Creek Road. Where the paved road ends, the trailhead is on the left. Parking with restroom facilities and picnic shelters is available a few miles further up Highway 17 at Buck Hall Recreation Area, where there’s a $5 car parking fee. The trail is easily accessed from either place.

Similar adventure:
For an urban/suburban ride that leads to woodland and marsh views, try the West Ashley Greenway. On the former path of a rail line, it extends 10.5 miles from the Windermere Shopping Center to Main Road on John’s Island. www.westashleygreenway.org

With salt water all around us, the Lowcountry’s ideal for fall and winter outings by boat. Even TV food goddess Giada De Laurentiis gave it a try. You may have seen the episode… the Italian chef was in Charleston to tape her Weekend Getaways show, and the film crew brought her to Wadmalaw Island. They all hopped on one of the rental boats and went crabbing in the salt creeks off of the North Edisto River.

But you definitely don’t have to be a celebrity to get out on the water around here. Even if you don’t have a boat—or a willing friend with one—you can rent a water craft for the afternoon or the whole day from Teri and Billy Whitner, owners of Bohicket Boat.

Founded in 1982, the company operates from the docks of Cherry Point Seafood, at the end of a dirt road on Wadmalaw. The setting is about as raw and rustic as commercial fishing gets—parts of boats in the yard, wet concrete floors inside, and maybe the crew of shrimpers unloading their catch when you walk through the small processing building. (Billy smiles and describes the sights and smells as “an authentic glimpse of South Carolina’s heritage with the sea.”) Once on the dock, you’ll meet him, Teri, or one of the other guides, who’ll take you through a notebook of safety information and well-marked, plastic-coated maps to carry aboard. “People don’t always know about tides,” Billy says. “We have to make sure they understand that part.”

Soon, you’re off to explore. The rental fleet includes deck boats and skiffs, Boston Whalers, and a sailboat or two. (If you’d rather go motor-free, kayaks are also available.) Jump on board and within minutes, you can be cruising past Rockville for a view of the houses that line the water, some dating to the 18th century. In another direction, there’s a line of condos on Seabrook Island, and out toward the open ocean is the protected rookery at Deveaux Bank Seabird Sanctuary, along with the mostly wooded Botany Island and its secluded beaches known for excellent shelling.

Yes, this is a proper slice of the Lowcountry—there’s open water and tides, marsh grass and mudbanks. A sailboat passes, pelicans fly in line overhead, and dolphins rise to the water’s surface. Teri says she’s seen deer, fox, and once, five minks swimming across the open water. On a recent ride, she pointed to where a bald eagle has built an impressive nest on Botany Island, which, like so much in the Lowcountry, can only be reached by water. For this kind of scenery, you’ve simply got to be on a boat.

THE OUTING: Boating around tidal creeks and barrier island beaches

GET THERE: Follow Maybank Highway from its intersection with Folly Road nearly 19 miles as it crosses James, John’s, and Wadmalaw islands. Just before Rockville, take a left onto Cherry Point Road and follow for nearly 1.5 miles. (The final portion is a dirt road.) Park in the boatyard at Cherry Point Seafood and walk through the seafood processor to the docks.