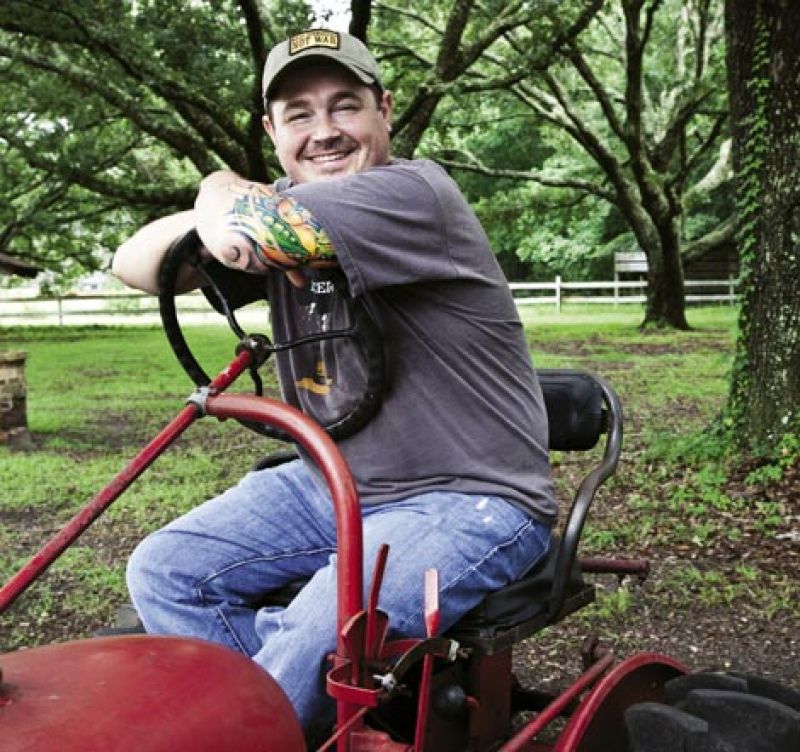 There’s a heat index of 109 degrees on this hot July day, but Sean Brock doesn’t seem to notice. He’s in his element, going row by row through his one and a half-acre heritage garden on McClellanville’s Thornhill Farm.

“This is Choppee okra,” he says, pointing to the long slender pods. “It was discovered in Georgetown in 1900, but I got my seeds in Tennessee. Those are Sea Island rice peas, so small they blend in with rice. Dr. David Shields gave me those seeds,” Brock says, referring to the chairman of the Carolina Gold Rice Foundation and McClintock professor of Southern Letters at the University of South Carolina. There’s Ham and Gravy crowder peas from Blackberry Farms seed, named for their distinctive red and white coloration, and a rare blue farro from Anson Mills owner Glenn Roberts. Wild Goose beans from seeds saved from Brock’s grandmother’s garden have been planted in the same hole with African Guinea corn and a variety of squash, three-sisters style—a Native American technique in which the beans use the corn as their trellis and the squash does double duty as mulch. “And, while the corn is pulling the nitrogen out of the soil, the beans are putting it back,” explains Brock, extremely satisfied with the natural cycle.

The chef moves to the rows of tall, bright green benne plants. He’s fascinated with this antebellum crop that Roberts, Shields, and Dr. Merle Shepard of Clemson’s Coastal Research Center have worked to repatriate into Charleston cuisine and uses both the leaves, which have the flavor of okra, and the seeds, which grow in little okra-like pods. “This benne tastes as it did when God made it—before it was genetically modified,” Brock says. He describes it as earthy, grassy, mineral-like, with a little touch of bitter at the end. “Sean is growing the oldest and most difficult benne I have. It has superior high flavor and low oil,” says Roberts. “He grew wheat this winter and may eventually grow rice. These are all components of antebellum benne rice bread.”

“Sean Brock is the best farmer who ever became a chef,” quips Border Springs Farm owner Craig Rogers, who supplies McCrady’s with pastured lamb. “Only a farmer can appreciate what he grows and then cooks. In fact, because of Sean, the whole kitchen team appreciates the craft of producing food long before it arrives in their kitchen.” Born in 1978 in a rural Virginia coalfield town so small that it had no stoplights, Brock cut his teeth on the vegetables in his grandmother’s garden, learning in childhood to grow what you needed to eat, inheriting the principles of saving and putting up.

His evolution through culinary school at Charleston’s Johnson & Wales campus, two years under mentor Bob Carter in the Peninsula Grill kitchen, and stints at Richmond’s Lemaire restaurant in the Jefferson Hotel and Nashville’s Hermitage Hotel led to his return to Charleston as executive chef of McCrady’s at the height of his love affair with molecular gastronomy. But as November brings the opening of Husk, Brock’s second restaurant with the Neighborhood Dining Group, it’s easy to see that he has returned to his roots. “Sean made a name as a wunderkind of molecular gastronomy,” observes Southern Foodways Alliance director John T. Edge, “but he’s proving his mettle as a resuscitator of lost culinary culture. He has an abiding commitment to Lowcountry farms, foodways, and people.”

Walk into the McCrady’s kitchen today and instead of stacks of futuristic ingredients, you’ll see jars of heirloom seeds and shelves of pickles and preserves. Look at the menu, and instead of ­­­­­­­Foie Gras Cotton Candy, you find Brown Benne Oyster Stew. “Sean has a genuine enthusiasm for hunting down and growing heirloom Southern ingredients and for figuring out how they might have been used in antebellum kitchens. It’s not a marketing angle for him; he gets this kid-in-the-candy-store gleam in his eye when he talks about 18th-century ingredients,” says Matt Lee, author with brother Ted of the award-winning The Lee Bros. Southern Cookbook.

No lip-service locavore, in addition to what he grows in his heritage garden, Brock sources from Maria Baldwin at Thornhill Farm, Sea Island farmers like Celeste Albers of Wadmalaw, and local farmers markets. Any surplus is preserved; in fact, the chef began stocking the larders of both restaurants last winter, reinventing the pantry with historical products. “Every night after service, we break out the cutting boards and start prepping for all the things we want to make in-house. We’ve pickled about 600 pounds of ramps, about 250 pounds of sunchokes, lots of dilly beans and peaches, and 100 jars of green tomatoes,” he says. A special top-of-the-list item for Husk is a signature hot sauce, a staple of the Southern table. “I started by buying three rows of chilies, around 100 pounds, from Sean Thackery,” Brock explains. “Drinking whiskey late-night with the owners of Tabasco, they told me how to do it, so we’re making our own.”

He sets the same standards for seafood, meat, and poultry, stating the sources of each dish on his menus. On leased farm property on Wadmalaw Island, Brock raised pigs from piglet to abattoir. Bev Eggleston of EcoFriendly Foods in Virginia, farmer and distributor of some of this country’s most highly regarded grass-fed meat and poultry, is breeding a unique pig just for Brock to raise at Thornhill Farm.

Rogers also is consulting with the chef on the possibilities of heritage breed poultry husbandry there. Rogers has already placed a flock of Katahdin hair sheep on the ACE Basin plantation of McCrady’s co-owner and Blackbaud founder Tony Bakker and his wife, Linda. During another South Carolina scorcher, Brock piles in his black pickup and drives down Highway 17, past Jacksonboro and Woods Hole, and then winds back under moss-draped oaks toward the Basin. Brock is here to cook. Coming in from the fields to the kitchen house, he serves up a refreshing summer fruit gazpacho, garnishing it with wood sorrel he found by a tree on the property. He follows with a trio presentation of lamb, Brock the chef sharing his passion with the Bakkers’ new passion as raisers—a celebration that the animals deserve. “We had a whole lamb and wanted to utilize the entire animal,” says Brock, “so even the bones are used to make the sauce.”

Wine is poured, and they speak of lamb and the future. The Bakkers’ flock numbers 30, 14 of which are lambs. With McCrady’s serving 20 lambs a month, it’s obvious that they don’t partner in sheep to supply the restaurant. This requires a large livestock operation such as Border Springs that has lambing four times a year. Rather, says Rogers, “this gives Sean a sense of how the ingredient comes to him.” Along with farm manager Will Craven, Bakker and Brock have experienced the lambing, bottle-fed the babies, shorn their hooves, and had the annual harvest. Sean drove the lambs to the abattoir in Kingstree himself, a trip he admits was stressful.

The talk moves to the Bev Eggleston pigs and using the plantation’s woods as foraging ground should some be brought down. Would olive trees grow? There is historical precedent in Charleston and great success with groves on Cumberland Island. The plantation’s original rice fields have become brackish, but there is a possibility of dry-planting Carolina Gold. “Sean was one of the earliest chefs to be interested in Carolina Gold rice,” says Roberts, who is credited with the successful restoration of the crop that made the fortunes of colonial Carolina planters. “He was the first chef in America to ask me for the full list of crop rotations for antebellum husbandry. There is a sequence of crops that you must run before growing rice. He made me write them all down. He supported rotations and facilitated rice field discussions on several different properties.” The ties that bond restaurant owner and chef are evident, as the discussion of what crops might be grown on the ACE Basin soil clearly has no end.

Professor Shields puts it this way: “Sean Brock seeks the fundamental ingredients that made Southern cooking an authentic style—the old-breed hogs, heirloom tomatoes, Carolina Gold rice, benne, rice peas, field greens, sweet potatoes. He grows them himself, ensuring that the flavor of the soil and air—the terroir—sings in each dish. Then he applies his supremely cultivated 21st-century kitchen techniques, so the oldest and most profound flavors taste new and fresh again. If linking the farm to the plate is the hallmark of culinary honesty, no chef is more energetic in letting his kitchen garden drive his kitchen.” During his five years at the helm of McCrady’s, Brock has moved away from the molecular gastronomy that consumed his early cuisine. By May 2010, when he was a first-nomination winner of the James Beard Foundation Award for Best Chef: Southeast, his methods were still modern, but his food was informed by his return to the land. “That natural interest,” says Matt Lee, “combined with a contemporary American chef’s approach to building flavor and texture on the plate, gives him an edge. He may know the ways heirloom benne was used in the early 19th century, but he’s not going to let that restrict how he uses it in his next dish. You can bet that benne’s going to run smack into the Robot Coupe, the Pacojet, and all the other modern tools in his box. It’s a rare gift to be able to incorporate old foodways into contemporary cuisine in a meaningful, and respectful, way.”

When Husk opens next month in the renovated historic buildings at 74 and 76 Queen Street, Brock says it “will celebrate Southern food in a restaurant where all of the ingredients have been raised, grown, or produced in the South and resurrect older dishes as we resurrect old crops.” He will put on the plate everything that he learned at his grandmother’s elbows and on his gastronomic journey through the South, incorporating a full farm into the daily life of his restaurant and staff. “It is a special gift,” says Shields, “to be able to renovate old pleasures and make the meaning of eating Southern so deeply informed and rewarding.”

“The name ‘Husk’,” Brock says, “speaks of everything I love about the South: corn, grits, seed saving, and bourbon.”