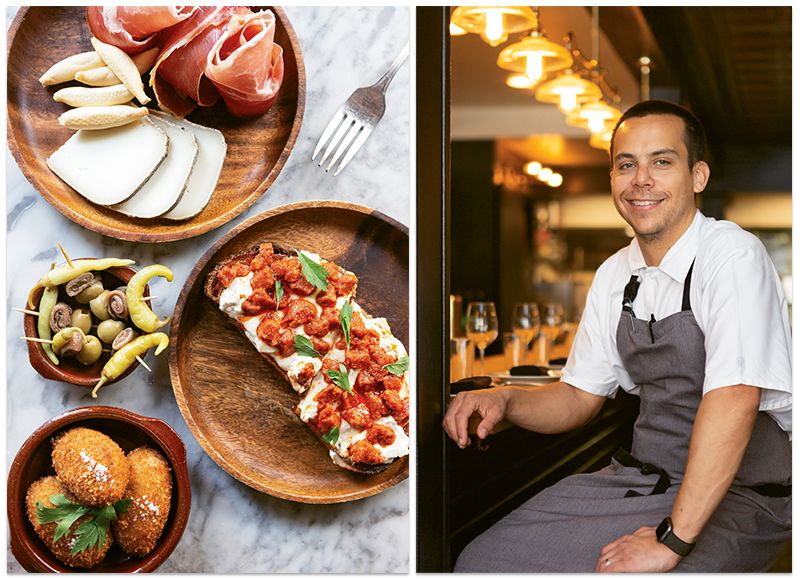 You begin with corn nuts. A pinch pot of complimentary, crunchy quicos arrives at the table, and you snack while taking in the environs—a slender space teeming with both still life and action: paintings of regal fowl and idle allium; cured jamón legs that dangle like lavaliers from the ceiling; marinière-clad servers floating table to table, topping up wine. If you’ve snagged a reservation, required for every spot including the bar, you’re the sort of diner who plans ahead. There are fewer seats than menu items (35 dishes, 44 with charcuterie), the details of which do not appear online. But this is good mystery; like wandering down a side street on vacation, new experiences are meant to spark curiosity and surprise.

And there’s plenty to explore at Malagón. The latest venture by the Chez Nous team is like its older, French/Italian sister restaurant: an intimate space, this time an ode to Spain. Though named after Juan Cassalett’s grandfather—a totemic figure in the executive chef’s culinary and personal development—the Cannonborough taperia/mercado is a group effort from its five partners, and the care they’ve expended to faithfully convey a Spanish sensibility is unmistakable. Fanny and Patrick Panella (Chez Nous, Bin 152) curate the market and wines respectively; immaculately stocked imported goods line a wall boasting all things from quince paste to fancy fried egg-flavored potato chips, while native varietals constitute an intriguing, exclusively Spanish wine list. Chris Kellogg has adorned the room with antique embellishments for a lived-in quality that portals you away from Spring Street, distinctly, uniquely elsewhere. And Cassalett has whittled his travels abroad with wife and Chez Nous executive chef, Jill Mathias, into a selection of eats that tours Spain’s greater nuances, beyond conventional tapas.

Relaying a portrait of Spanish gastronomic identity (its myriad influences braiding Greek, Carthaginian, Moorish, and Jewish histories) is no easy task. The word “tapas” alone can conjure certain faddish small plates notions that trended stateside around 2012—namely concept-y, miniscule portions that accumulate to a sticker-shock bill. Originally created to stave Spanish appetites between late lunch and an even later supper (taken anywhere between 10 p.m. to midnight), the conceit doesn’t always fluidly fit into American repast traditions. Malagón’s eight-sectioned menu (literally a booklet) is an ambitious assortment of tapas and mains, purposefully comprehensive to provide diners a glimpse of Spain’s richer depths beyond Iberico ham or croquetas. But fret not. Informed, genial servers will help navigate your choices.

Like any first adventure, you’ll be drawn to visit the landmarks. Cassalett’s rendition of the tortilla Española (an iconic egg and potato frittata) is pillowy and personal-pan-sized, served magma-hot on a miniature cast iron skillet with a dial of garlic-redolent aioli. But do journey, as they say, off the beaten path. The para picar items (salty, toothpick-spiked nibbles similar to Basque pintxos) are meant to rouse thirst. Piquillos con anchoas (coils of delicately sweet pimientos and elegant white anchovies) or mejillones (escabeche-marinated, shelled mussels) paired with a crisp, mineral-driven Albariño offer a Mediterranean prelude.

You can cruise the eastern coastline, too, with the gambas a la plancha: grilled local shrimp simply dressed in olive oil, sea salt, and fresh lemon that radiate colossal flavor. Then veer west with smoky, blistered padrón peppers that channel northwest Galicia. Or venture inland with the berenjenas manchegas (a nod to Cassalett’s grandfather’s hometown in La Mancha); the fairytale eggplants, pickled whole with paprika, fennel, and cumin seed and awakened by chili, represent a Moorish essence so integral to Spanish cuisine.

With a menu this scopic, there are bound to be misses. The rossejat negro is a classic Catalan dish (paella’s lesser known cousin), composed of short toasted fideo noodles, squid loops and ink, and a generous whorl of aioli. The dish was suffuse with oceanic flavor on one visit but had dulled considerably on a second, lacking that quintessential, inky brine and begged for a glimmer of acid to cut through the richness. Plus, several accidental omissions, among them a near-superb sauteed calamari with blood sausage (calamar con morcilla) absent of its chickpeas. But there are bites that will ferry you somewhere heavenly too, such as the sobrasada con queso: toasted house sourdough slathered with tangy goat cheese, studded with chorizo morsels, then burnished in local honey. The superlative flan—a silken mesa of quivering, caramelized custard—is a wonder of its own.

In the end, what sets Malagón apart is Cassalett’s lifelong adoration for a place and its food. Tapas, yes, but also spice, flavor, method, and character plucked from Spain, coast to coast. Is it original? No, but as Spaniard Picasso once aptly said, “Good artists borrow; great artists steal.” If the goal is not invention but tribute, Malagón is indeed a successful collage.

The Draw: From snacks to mains, an eclectic taste of Spain beyond conventional tapas
The Drawback: With a menu of 40-plus dishes, execution varies; reservations required.
Don’t Miss: Sobrasada con queso, gambas a la plancha, setas a la parilla, ribs, and flan
Price: $7-$65 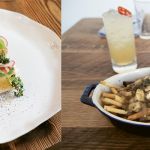 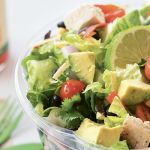 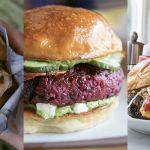