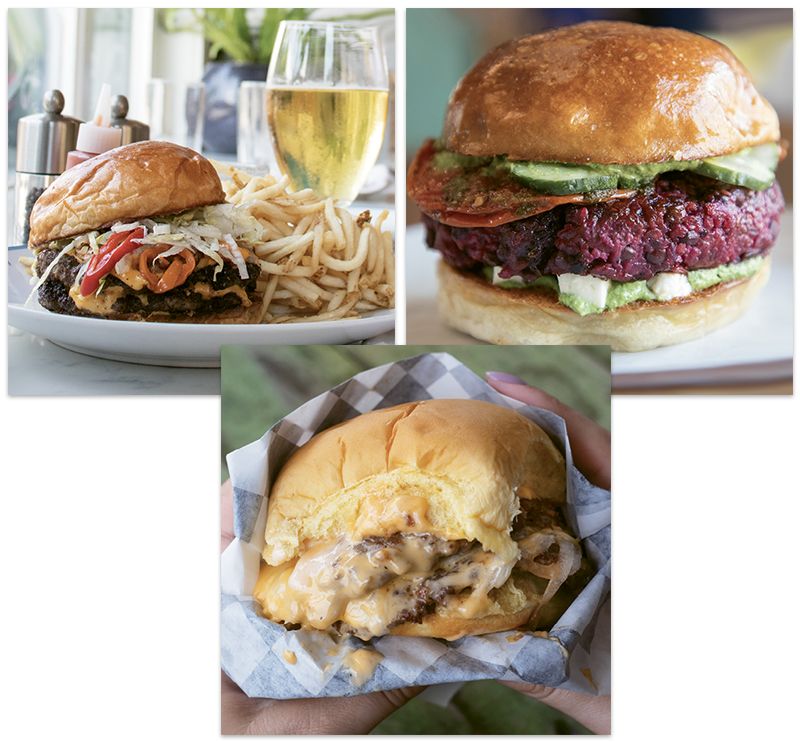 “For my husband and me, a visit to Purlieu requires ordering at least one P237. The flavor combo and lighter-than-air bun are simply irresistible.” —Darcy Shankland, editor-in-chief

“Many veggie burgers attempt to make you think you’re eating meat. Butcher & Bee defies that convention and celebrates vegetables instead. The vivid colors and flavors bursting from their buttery brioche bun—oh baby, does it taste good!” —Marion Sullivan, food editor

“A Pub Fare burger doesn’t pretend to be something it isn’t. It’s a solid, American smashburger with the best tasting ingredients from the beef to the bun to the sauce. These burgers are served out of a food truck. They don’t have to go that hard, but they do. They do that for us!” —Molly Wickham, graphic designer

“I would have never thought an Irish pub would make a fantastic burger, but they do. It’s a mighty, meaty mouthful that’s worth every calorie. On Tuesdays, you can get it with a pint for $10, made even better on a night with live music.” —Kinsey Gidick, interim managing editor

The Black ’n’ Blue ($10.50) Moe’s Crosstown Tavern, moescrosstown.com
The Deets: An eight-ounce Angus and ground chuck patty spiced with paprika and cayenne; topped with Glenview Farms blue cheese crumbles, lettuce, and tomato on a brioche bun; and served with a choice of side.

“The Black ’n’ Blue is my cheap and cheerful option. I may just be a sucker for blue cheese, but that thing has all the right ratios.” —Nate Leach, videographer

“It’s the perfect size and gives all the pleasure with none of the overfilled gut-bust after effects that come with most overloaded options.” —Melissa Bigner, senior editor