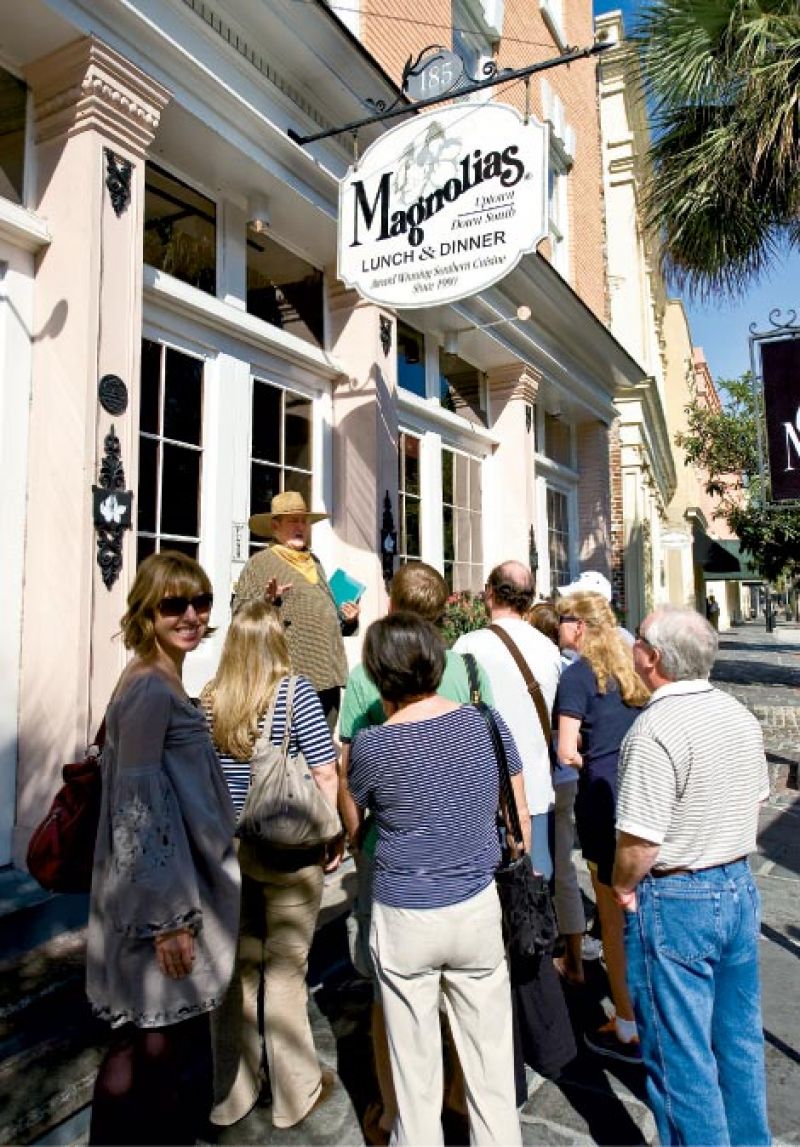 I still have a childish case of “don’t tell me what to do,” which makes standard tours (“walk this way,” “stand on that side of the cordoned off area,” “don’t touch that”) a trying affair for all involved. While it tends to make me a good reporter, it also makes me a terrible follower. So when I scored a ticket to the Charleston Chefs Kitchen Tour from Culinary Tours of Charleston, I was equal parts apprehensive and excited. Getting to explore the kitchens and meet the chefs in some of the best restaurants in one of the most lauded eating cities in America? Awesome. Having to be a tour zombie? Eh.

Apparently this wasn’t your school marm’s tour, though, as our guide Hoon Calhoun made clear to our group—capped at 12 for logistics’ sake. First, he led us to the second floor of Barbara Jean’s, and while we spooned up white cheddar grits and gobbled fresh-from-the-oven pecan cinnamon rolls with orange marmalade icing, he went into culinary history high gear. His rendition of the city’s past to present was dramatic, riveting, and spot-on factually. Though Hoon, a Charleston native, spent 30 some years in Atlanta in the tech business, the Northwestern University communications and theater major had us slack-jawed with his telling—at least when we weren’t chewing. Even Jann Atkins, who was here from Minneapolis for a wedding (and who, after some prying, confessed she’s the manager of the Pillsbury Bake-Off Kitchens), said she was truly impressed with his knowledge and delivery.

Hoon next took us to Carolina’s on Exchange Street. Originally, he said, it was Perdita’s, which in the 1950s was the place for local diners. General manager John Levanchy walked us through the kitchen, showing us how tickets come in and dishes are cooked up, then delivered to patrons. He displayed some of the local produce for specials that night and talked about Charleston’s farm-to-table movement and the arm wrestling for the harvest from restaurant to restaurant.

Heading to East Bay Street, we aimed for Magnolias, where chef Don Drake offered us sweet tea (and a shot of Firefly Sweet Tea Vodka), along with boiled peanut hummus, pimiento cheese, and shrimp and sausage grits. He shared how the kitchen runs smooth thanks to Mizz Marshall, a Gullah local who’s worked there forever and keeps the young fellows in the back in line. Don then led us over to sister restaurant Blossom, where—over mini basil crab cakes and chorizo on cornmeal cakes—he explained that they covered part of the restaurant’s patio to yield more all-weather seating. Any one seat can equal tens of thousands of dollars in annual revenue, he pointed out, so the business side couldn’t be ignored.

Last, we walked over to Cypress, where James Beard Award-nominated chef and cookbook author Craig Deihl let us gawk at the locker where his famed charcuterie cures. Given he’s at the forefront of artisan meat making in the South, it was a real treat to shadow him and sample slice after slice of his highly nuanced pancettas, coppas, sopressatas, and more.

I could keep on, but recapping is beside the point. Whether you’re a tour junkie, a foodie, a history buff, or just someone who likes to peek behind the curtain, take it from a gal who loathes being told what to do: go.