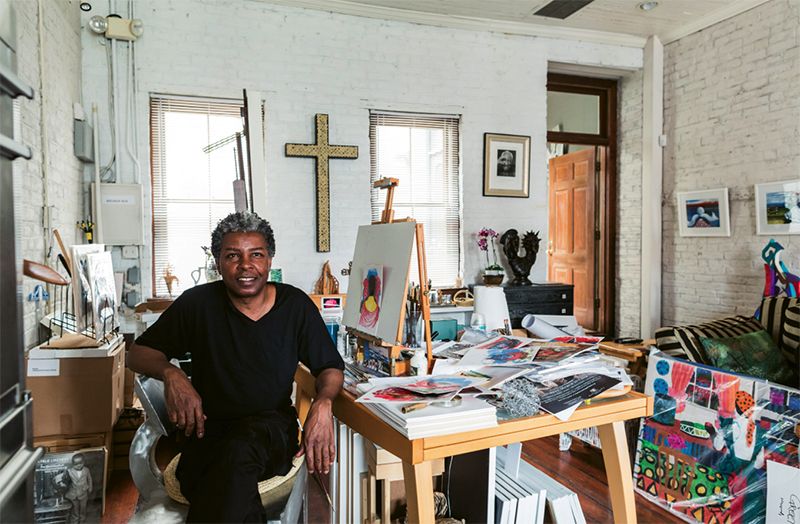 Green. Could there be a more apropos name for a gentleman who never seems to age? Or for an artist whose palette is perennially bright, his images saturated in joyful primary colors? There is energy and motion, a happy swing or swirl of some sort, in almost every Jonathan Green painting, even as the man himself—a well-known and much-loved artistic Shiva with hands always in multitudes of projects—exudes a gentle serenity.

Perhaps that’s because Green is firmly grounded, with an ever-renewable creativity sourced from deep roots in the pluff mud and former rice fields of his Sea Island heritage. He was born and reared in the Gullah community of rural Gardens Corner, South Carolina, and it’s this rootedness in the Gullah culture and history that continues to fuel Green’s impressive artistic output, which now in its fourth decade (the last five years of which have been based in Charleston) doesn’t appear to be slowing down. At all. And certainly not if Spoleto Festival USA’s ambitious production of George Gershwin’s Porgy and Bess is any indication.

When Spoleto general manager Nigel Redden decided to bring the famed 1934 opera home again (it was first performed in Charleston at the Gaillard in 1970) to celebrate the festival’s 40th anniversary and return to the newly overhauled Gaillard Center, he knew the production had to be special. “One of our challenges is recognizing the iconic significance of doing Porgy and Bess in Charleston, as opposed to New York or Chicago or wherever. After all, Catfish Row is down the street,” says Redden, who was intent on honoring the Gullah aspects of DuBose Heyward’s tale and Gershwin’s score, which bears the imprint of the composer’s time on James Island and Folly Beach and familiarity with African-American spirituals. And while Redden knew of no Gullah opera directors or conductors, “Jonathan Green was our obvious candidate and first choice for the artistic vision and design,” he says.

Green accepted the invitation without hesitation, “but under one condition: that I could do it from the perspective of Africans who came to this country like everyone else,” which is to say, as if they had arrived here of their own volition. “I had seen several productions of Porgy and Bess and was always struck at how visually degrading they were of black people and how they dressed,” says Green, who led the design of both the sets and costumes.

Well before taking on the job, Green had also gotten to know the late Hollis Alpert, Heyward’s former assistant and author of The Life and Times of Porgy and Bess: The Story of an American Classic (1990), when both Green and Alpert lived in Naples, Florida. Green learned from the then-85-year-old Alpert that neither Heyward nor Gershwin ever intended for the characters on stage to appear bedraggled, suggestive of their enslaved past. On the contrary, both men revered the Gullah people and culture they had come to know, a fact underscored by Gershwin’s stipulation, written in his will, that the opera must be performed by an all-black cast.

Nonstop Ideas
When the Gaillard curtain rises and the tenor sax unleashes those first three notes of Gershwin’s melting elegy to summertime, the audience will surely recognize the slow-rolling tune, just as they will recognize Charleston’s old tenements. And while they may be surprised to see the crippled beggar Porgy, his girl Bess, and the cast in colorful costumes—all polka-dots and stripes and brilliantly white flowing dresses with ribbons and festive hats and head wraps—they may well recognize these too, as the exuberant garbs seem to have waltzed right out of a Jonathan Green painting.

Instead of presenting a downtrodden and ragtag ambiance for Porgy and Bess, Green, who studied textile design before attending the Art Institute of Chicago, uses the costumes as well as set design to shift the dynamic. “I wanted to add back in what should have been there, add in elements of the African visual culture to the American culture. With the costumes, I’m taking the black figure and humanizing it,” says Green, who notes that despite their poverty, he never saw his grandfather or the black farmers of his native Gardens Corner dress in a disheveled way. “Starched white collars, always—it was a matter of pride,” he adds.

For the set, Green kept the familiar milieu of Charleston and Catfish Row with a few tweaks and augmentations. “This is where Jonathan’s concept takes off in a powerful way,” Redden explains. “As the opera unfolds and you get to know the residents of Catfish Row and the cadence of the music, you begin to see the set transform, not structurally but decoratively, and to see something much more in it than you did at the beginning.” One subtle way Green accomplishes this is by adding diamond patterns that are common West African design elements on buildings. He also suggested taking this symbolism beyond the stage and into the actual Charleston streetscape, as a site-specific art installation stenciled on select structures that have African-American historic significance.

“Jonathan is nonstop ideas. He’s pushing us in a variety of different ways,” Redden says. “The festival invites people to look at Charleston with fresh eyes, and this will offer a way to explore the city through a different set of lenses. People will see this African element and realize, ‘so that’s the history of this house.’”

Rice Cultivator
Collaborating on this seminal production of Porgy and Bess is, Green acknowledges, an honor and a career high point. It’s also a natural extension of a creative and cultural passion that has shaped his recent work, both on the canvas and in the community. Since moving back to the Lowcountry in 2011, he has served on the boards of the Charleston World Heritage Coalition, Gaillard Center, and International African American Museum as well as consulted on the arts-infused curriculum at the new Sanders-Clyde Creative Arts School. Yet if there’s another overarching theme unifying Green’s various endeavors, it might just boil down to rice.

“Rice is the bridge between Africa, the Caribbean, and the Americas,” he explains. And the rice industry, fueled by the labor of millions of Africans, enslaved and brought here against their will, was the economic engine that created the power and influence of the white planters, slave traders, and ruling class; that funded the buildings and architectural legacy that continues today to be a regional economic driver (via real estate and tourism); and that, in turn, influenced the foodways, art, music, and culture of the South. As founder and chair of the Lowcountry Rice Culture Project, Green is working with researchers, historians, artists, and others to explore and elevate the history and enduring legacy of the Lowcountry rice economy; they’re using rice as a starting point to “foster dialogue, understanding, truth, and reconciliation,” as the project’s website states.

“I want to use rice symbolically to re-address issues of history, race, culture, and economics,” Green explains. The project has brought him knee-deep into cypress swamps from Middleton Place to Daniel Island, where Green and his colleagues paint trees (as visual markers and totems to former rice fields), and into classrooms and lecture halls across the country. It’s also inspired his recent works, including a 2013 exhibit of 25 paintings at the Avery Research Institute entitled “Unenslaved: Rice Culture Painting by Jonathan Green,” featuring images alive with the flamboyance and pride of a people free to express their vibrant culture.

“My work reflects a spiritual, joyful evolution that comes from a perspective of clarity—feeling and knowing more about the history and the fact that I’m making changes to add to that history,” Green explains. “As an artist, my interest is to imprint the African on the landscape.”

In another endeavor of the Lowcountry Rice Culture project, Green is working with author and librettist Dr. Edda Fields-Black of Carnegie Mellon University to produce The Requiem for Rice in collaboration with composer Dr. Trevor Weston and Lee Pringle’s The Colour of Music festival; they plan to premiere the composition at the Gaillard in 2017.

When asked how he sustains the focus and energy to manage so many projects at once (did we mention that he’s also writing a children’s book about Robert Smalls and working with Charleston’s World Heritage Site effort to posthumously grant American citizenship to all enslaved people?) while remaining as mellow and pleasant as he does, the artist winks and smiles. “Saying ‘no’ often takes too much work, too much energy to explain,” says Green, who, ironically, has a downtown studio above the store Mellow Mood. And the encouragement and support of his incredibly organized partner, Richard Weedman, allows Green to pour time and energy into his work.

“I feel I’m in a unique situation to do this work,” Green says. “I’m from here, but I’ve also had the advantages and opportunity to travel around the world, to meet and be with people from other cultures, to work with people like Dr. Richard Porcher [whose book, The Market Preparation of Carolina Rice: An Illustrated History of Innovations in the Lowcountry Rice Kingdom, Green is re-reading]. That’s the best part for me—the opportunity to work with so many wonderful people on this project.”

A Messenger
Through a vast portfolio of paintings, posters, and associated projects, Green continues to paint a more complete picture of who his Gullah ancestors were, and in turn, who their descendants are today, and is able to do so because he knows exactly who he is and what his mission is. “I am a rescuer and messenger of an existence of a people and their culture that is often erased from the visual arts,” Green says.

And whether he does this from behind a podium discussing the agricultural and economic significance of Carolina rice, or in a school classroom inspiring future artists, or in the Spoleto scene shop working with set designers and costume makers to help redefine Porgy and Bess, or in creating his signature line of silk shawls, or, yes, in the studio with his paint brush in hand, you can be sure he’s thinking first and foremost of celebrating his African ancestors as an accomplished, creative, resourceful, and beautiful people who were enslaved, which—he makes clear—is entirely different from calling someone a slave.

Those fortunate enough to have a ticket to Spoleto’s sold-out centerpiece production will see firsthand what it means to revive not only a classic Gershwin opera, but a people’s culture and history. As Nigel Redden acknowledges, producing Porgy and Bess has been a huge undertaking, “but it’s been all the richer because of Jonathan’s involvement.” 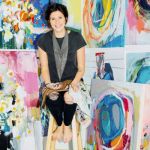 Painter Raven Roxanne Wilson on her latest work, including a line of scarves, and upcoming move to the Cigar Factory 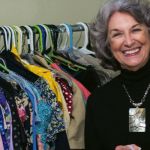 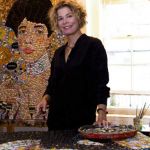