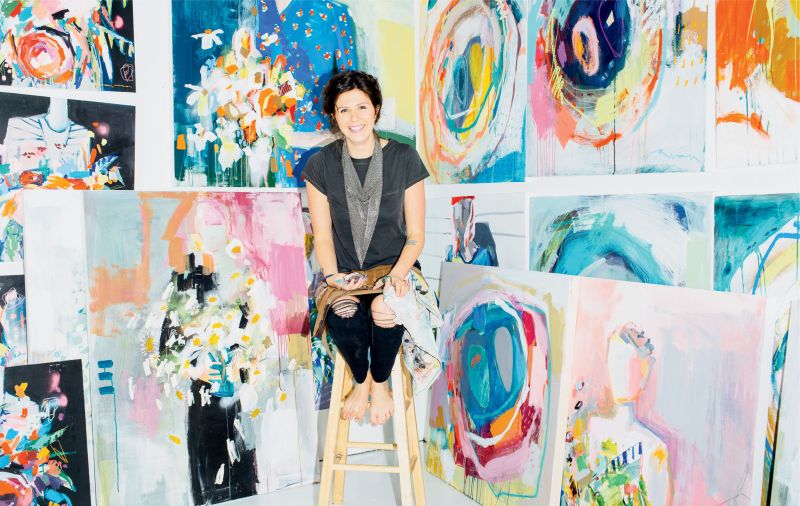 From her serene “Nest” series featuring opaque eggs set amidst colorful orbs to her group of “Girl with Flowers” works, Raven Roxanne Wilson’s mixed-media expressionistic paintings share a vibrancy, femininity, and sense of playfulness that are, in fact, reflective of the artist herself.

Wilson grew up surrounded by art at her parents’ The Zoo Gallery on Grayton Beach in Florida and eventually earned a BFA from Auburn University. After a stint in Atlanta working as a merchandiser and display coordinator for clothing line Free People, she moved to Charleston in 2013. Settling into studio space at Redux Contemporary Art Center, she found quick success selling her paintings at ravenroxanne.com.

We caught up with Wilson to learn about her line of painted scarves as well as her move to the Cigar Factory (slated for this month), where she’ll share a space with fellow artists Teil Duncan, Blakely Little, and Lulie Wallace.

Early influences: I pretty much grew up in my mom’s studio. She was encouraging when I wanted to make art but didn’t force it on me. I got the sense that she wanted me to concentrate on enjoying the process, not the product. In college, I became obsessed with Robert Rauschenberg. His idea that a painting must be in response to both art and life was important to me.

Inception of a series: I began the “Nest” series when I got engaged to my fiancé, Thomas McCutchen. I painted a bird’s nest for our save-the-dates, and the image stuck.

The scarves: I’ve always wanted to do scarves—I became interested in working with textiles while at Free People. I also love the idea of wearable art, especially for people who, like me, are in their 20s and either not yet settled or not yet able to afford large works of art. My first scarf, “The Roxanne,” in pink and orange hues, debuted in time for Christmas in 2014; it was a limited edition of only 50. This past December, I released “The Roxie” (named for my mother) in dark purples and black and “The Clementine” (for my grandmother) in orange and yellow. I created 100 of each design. I plan to release two new styles this year.

Out of the studio: I just got back from a trip to Paris with my mom. We stayed in a place found through Airbnb in the sixth arrondissement and spent most of our time walking, getting lost, sitting in coffee shops, and eating delicious food. This summer, I’d love to travel to Detroit, Portland, or Cuba to experience the arts in those communities.

A new space: I’m an extrovert, and a home studio would get pretty lonely. It helps to have other artists around to ask “What do you think of this?” or “Does this color work?” I’m lucky to have been surrounded by Teil, Blakely, and Lulie at Redux—I call them my work wives. I always give myself an extra 30 minutes to chat each day before starting work! Most of all, I’m looking forward to a bigger workspace at the Cigar Factory, which means I can start producing larger work. Plus, I’ll have a window, which is really exciting. 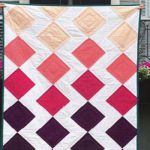 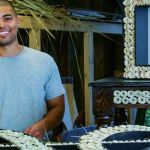