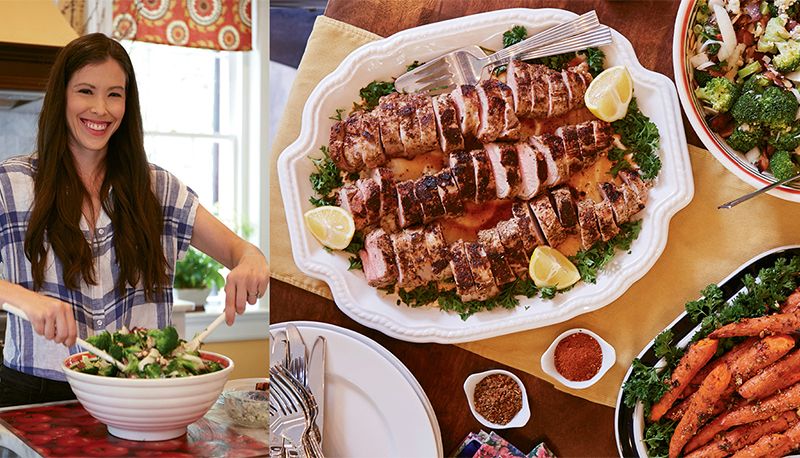 Two types of cooks bookend the home cooking spectrum: those who choose complex methodologies utilizing high-brow ingredients and those who prefer the “done in 15 minutes, uses five ingredients, tastes pretty good” philosophy. Cookbook author and New York City TV host Ali Rosen’s “no judgment cooking” approach falls squarely in the middle. “I want to do the least work for the highest impact,” explains the Charleston native, who returns to the Lowcountry frequently to visit her parents, Robert and Susan Rosen.

The daughter of two lawyers, Ali “grew up questioning everything.” Pairing that natural curiosity with her love of good eats, she’s cooked up a delicious media career. “There’s always more to learn about food,” she remarks, though as host of the Emmy-nominated television series Potluck with Ali, she’s certainly gotten her fill of knowledge. For the past five years, her public-access program has joined chefs in kitchens and bartenders behind the stick, bitten into distinctive cuisines, and showcased a smorgasbord of recipes.

Ali’s first cookbook, Bring It!, debuted last spring to much praise, including nods from Oprah Winfrey and Martha Stewart. With friendly guidance on ingredients, shortcuts, timing, and presentation, the make-and-take recipe collection includes spins on classics as well as interpretations of international dishes. While developing the book, Ali relished creating the recipes and using casual gatherings such as her family’s annual pre-Thanksgiving potluck as taste-testing labs.

“Thanksgiving is huge for us, so it’s nice to have a casual party before the big shebang,” explains Ali. Every year, the same family members attend the celebration, “plus a lot of stray friends” who receive a warm welcome at the Rosens’ South of Broad home. Among the hors d’oeuvres laid out in the bright sitting room is a straightforward eggplant and ham toast appetizer that highlights good-quality ingredients. “Don’t assume the eggplant will save your bread,” stresses Ali, who prefers a hearty yet thinly sliced loaf from Normandy Farm.

(Left) Ali’s three-year-old son, Guy, helps her garnish ham and eggplant toasts.; (Right) Ali gets cooking inspiration from her grandmother, who “did everything the old- fashioned way, from scratch,” she says.

In the dining room, which Susan sets with china even for a relaxed affair, the main course comprises spice-crusted pork alongside savory vegetable sides. “This tenderloin recipe works well for groups because it can be served hot, room temp, or straight from the fridge,” notes Ali. Her trick for locking in moisture no matter when the meat is offered? A layer of Greek yogurt and mustard rubbed on before the coating of warm coriander, spicy cayenne, and floral herbes de Provence, then a skillet-sear to form a nice crust.

Accompanying the pork are roasted carrots cooked into an earthy sauce of Dijon and whole grain mustard. Rather than waste artisanal versions that lose their subtle flavors during cooking, Ali chooses her “gold standard of grocery store brands,” Maille. The dish also delivers a lesson in presentation: “My cookbook stylist taught me that cutting foods on the bias makes everything look fancier.”

Buttermilk broccoli salad blends customary flavors like blue cheese, Vidalia onion, almonds, and bacon in a tangy buttermilk dressing that surprises guests who are used to the usual mayonnaise-tossed version. To be certain the florets have the right tender crunch, Ali pre-steams them and dresses them just before serving.

As satiated guests saunter back through the kitchen, they can’t resist one more nosh on Ali’s stepped-up spice cookies. “Anytime you elevate an ingredient in a cookie, you’re going to be able to taste it.” Though swapping vanilla seeds for bottled extract may not be worth the expense for some, she promises that utilizing freshly grated ginger and orange zest will yield a superior treat.

Recipes reprinted with permission from Bring It! © 2018 by Ali Rosen, Running Press.

In the Kitchen with Ali Rosen

Lives: In New York City with her husband, Daniel, and three-year-old son, Guy
Works: As a cookbook author and the founder/host of the Emmy-nominated Potluck with Ali TV series
On Cookbook Writing: “The most gratifying part of cookbook work is when I’m tagged on Instagram because someone made one of my recipes and received lots of compliments.” 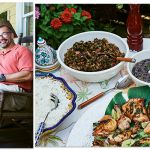 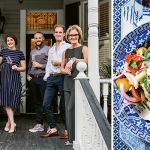 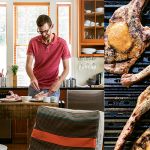