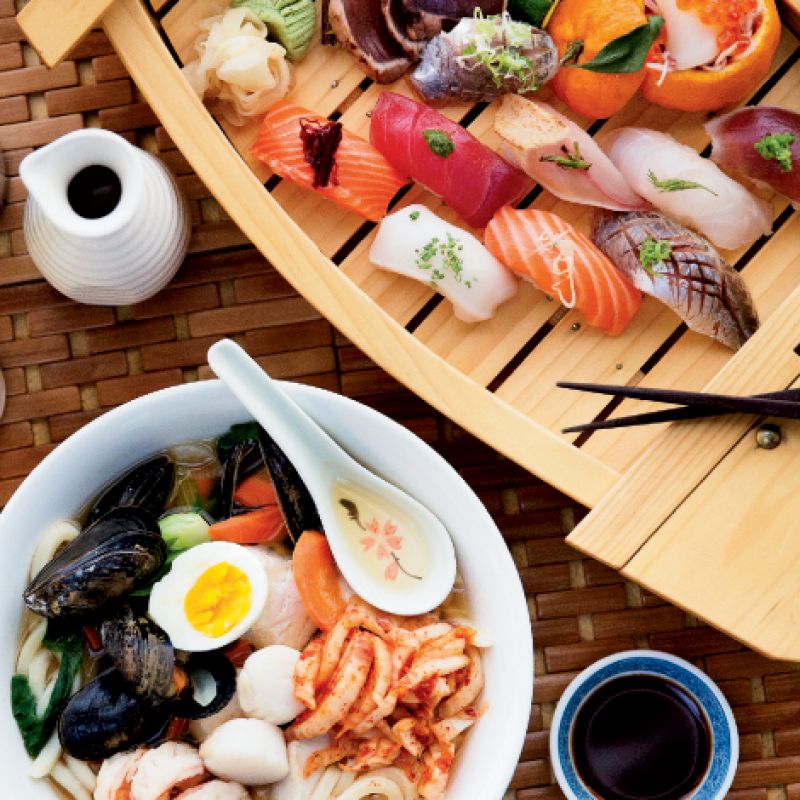 It’s hard to count the number of places in town where you can score steamed edamame, and it’s equally difficult to tally the number of chefs sprinkling their dishes with pink salt mined from the Himalayas. Yet there’s only one

establishment where you can eat both from the same bowl and savor a glistening slice of raw fatty tuna belly while helping the chef-owner’s son do his math homework.

With his latest restaurant, Sean Park has generated a compendium of local ink, the consensus being that some of Charleston’s most creative and skillful sushi inhabits a shoebox of a space in a characterless Mount Pleasant strip mall.

Arguing with these assertions proves difficult but makes Kanpai a rather compelling place.

All the elements of standard American sushi reside here: the obligatory seated bar; the itamae (sushi chef) with his razor-sharp yanagi (sushi knife) glinting through chilled glass partitions filled with raw fish; and Sapporo tumbling into frosty glasses. At a glance, Kanpai could almost be mistaken for an izakaya: Park would only need to hang a red lantern at the door for his restaurant to resemble those oft-threadbare establishments where the food complements the drink (instead of the other way around). But the food here is too good for that, and this is not an after-hours watering hole. It’s a family place where children, strollers, bibs, and Park’s own son are welcome.

On the menu, sections of soups and salads join the small izakaya plates to fill a full page that embodies the most delicious expression of Asian creativity in Charleston, rivaled only by Park’s former kitchen, the Upper King darling of sushi, O-Ku. At Kanpai, Park’s talent is showcased through his collection of unorthodox preparations and traverses geographical and historical boundaries. Sweet kabocha squash are swirled into a rich bisque topped with fried tofu and crème fraiche and spiked with the citrus pang of yuzu. Toro, the fatty underbelly of the tuna, is chopped raw and served simply as a luscious tartare. Thick Japanese udon noodles come in a piping bowl of broth teeming with shrimp, chicken, scallops, and spicy Korean kimchi. The edamame gets its sprinkle of pink salt. (If that’s not your game, Park will dress the beans with truffles and hot chili oil.)
And from the toothsome ramen served in a simple salted shio broth to the delicious selection of house-made Japanese pickled vegetables and seafood called sunomono, the small plates shine. One bite into a $3 steamed bun filled with pork belly or duck confit could bring you to call out “Kanpai!”—roughly translated as “Cheers!” All are excellent, excepting the pork belly gochujang, a flabby piece of pork splayed atop a goopy vegetable succotash, which seems inspired more by memories of public school lunch than fine Asian cuisine.

The raw fish at Kanpai surpasses all others in town—when it’s available. I’ve never dined there without at least one of the listed fish being unavailable due to it “not being good right now” or without the waitress returning to share that, alas, the Hawaiian blue marlin won’t be in for two more days and the Scottish salmon has run out. Perhaps they should just scrawl the day’s offerings on a chalkboard. Simply tossing the printed menu might assuage the letdown that comes from imagining a meal of expertly carved albacore tuna, king salmon, scallop, sea urchin, and red clam only to find your selections rebuffed.

So sometimes I am left to ponder brightly colored sushi rolls with names like “Tuna Blossom,” “Kanpai Crunch,” and “Firecracker.” Park will even make them with brown rice, exceptionally good in the “Wagyu” roll, a brilliant combination of blowtorched fatty beef and avocado wrapped around tempura-fried shrimp and mopped with a sweet soy glaze—assuming the Wagyu is available. If it’s not, I grab beignets for dessert. They’re hot and feathery. I can never finish them all. Maybe next time, if my little friend finishes his homework, I’ll cut him in for a job that—like his dad’s—is very well done.

The Draw: The best sushi east of the Cooper River
The Drawback: Fine diners find the space on the pedestrian side.
Don’t Miss: The beautiful, pickled sunomono Price: $12-$21