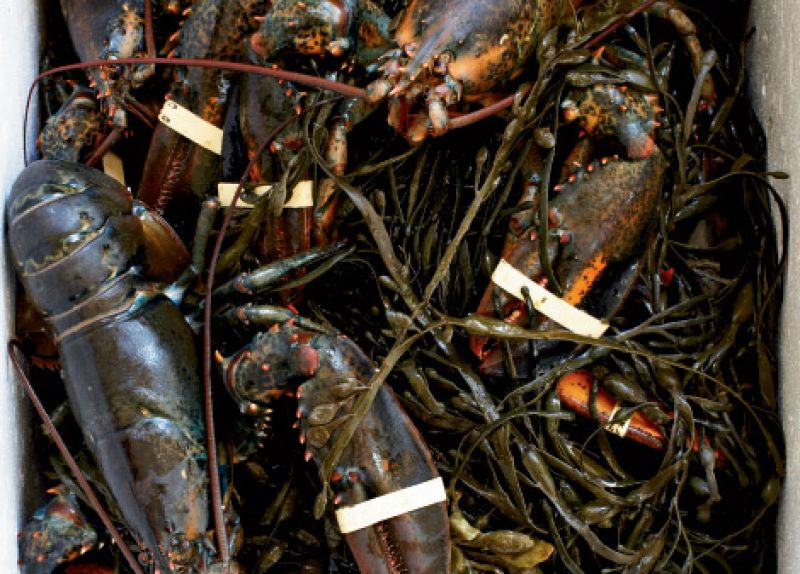 Tom O’Connor and Matt Pugliese know how to escape the summer heat. Each year, the couple leaves behind balmy South Carolina and heads to New England for a week or so to hit favorite towns, visit old friends, and reset against a backdrop of harbors crowded with fishing boats and breezy seafood suppers at day’s end.

Back at home in the Holy City, in the sunny kitchen of their downtown Victorian, Tom and Matt rattle off favorite points north in quick succession. They each cue the other on past trips to spots along Buzzards’ Bay like Mattapoisett and Marion, and to Martha’s Vineyard, Marblehead, and Maine’s central coast.

These summer sojourns began more than 20 years ago, shortly after the couple met while working as television execs on the West coast. Their move to Charleston came in 2004, when Tom and Matt traded in their entertainment industry careers and Studio City digs for a more easterly place to settle (Tom hails from Michigan, Matt from Pennsylvania). With family in Hilton Head, they quickly agreed on Charleston and have since built a successful real estate business fixing up downtrodden dwellings.

Among the rescues is their current late-1800s house, today the setting for an inspired North-meets-South lobster bake that the two dreamed up to share the best of their summer getaways with Charleston pals.

"We figured, why not bring a favorite Northern tradition down South for an afternoon?" offers Matt, a Boston College alum.

The pair fashioned a long, 20-guest table to stretch down their legustrum-bordered pool garden, lit by paper lanterns strung overhead. Just inside, a cocktail bar boasts New England-named offerings on the porch, while fresh lobsters cook in giant pots in the kitchen. Instead of tossing clams and potatoes into the mix (per tradition), Tom and Matt serve up Southern crab cakes and fresh corn salad. And for dessert? A South Carolina peach and Maine blueberry cobbler.

There were, of course, a few notable challenges to throwing a lobster bash south of the Mason Dixon line. “The morning of the party, we learned that the guests of honor missed their flight,” says Matt, referring to the two dozen Maine lobsters due to be shipped in. “Thankfully, we live in a foodie town and were able to track down replacements in less than an hour. So our ‘New England lobsters’ were from Canada,” he laughs.

Tom adds, “That, and timing was an issue. This may be a summer party up North, but down here, an outdoor dinner party doesn’t always go over well in August. Spring worked a little better for us.”

What is a lobster bake? Originated by Native Americans, a lobster bake is an outdoor cooking method (usually on a beach) that centers around a rock-lined pit dug in the sand. A fire heats the rocks before several layers of seaweed are added, topped by a layer each of clams, potatoes, corn, and finally, the lobsters. The “lid” is another layer of seaweed covered by a canvas tarp and anchored down on all sides. Cooking takes about an hour, or until the lobsters turn red.

How to boil lobsters at home: Start with live lobsters, purchased or delivered the same day you intend to eat them. Do not remove elastic bands from the claws prior to boiling.

1. Fill a large, five-gallon pot approximately three-quarters full of seawater or salted water. (Use about 2 ½ quarts of water for each lobster, with two tablespoons salt per quart of water). Bring the water to a boil.

2. One at a time, plunge live lobsters into the water quickly (up to four to a pot). The boiling water should kill the creature instantly, but be careful of splash caused by the tail. Bring the water to a boil again.

4. A cooked lobster will turn bright red, but be sure and crack one open where the body meets the tail to ensure it’s done. The meat should have turned from translucent to white. Do not overcook—overdone lobster meat will be tough.

Note: Concerned about the humanity of boiling live lobsters? Researchers at the Lobster Institute, a research arm of the University of Maine, report that lobsters have no central nervous system or cerebral cortex, and therefore cannot perceive or process pain. Still, if you’d rather not wrestle a thrashing lobster, you can stick a sharp knife straight down behind the lobster’s eyes to kill it just before cooking.

How to select lobster:

Size: A one-and-a-half pounder is a good size for a single serving—keep in mind that larger lobsters (more than three pounds) are often older and their meat tends to be tough.

Appearance: When selecting lobsters from a tank, look for lively, active creatures whose tails contract and curl when picked up.

Source: Buy live Maine and Canadian lobsters from Crosby’s Seafood, which stocks them year-round. Or order from charlestonseafood.com (Tom and Matt’s source) or Huff’s Seafood on Folly Road for same- or next-day delivery.

How much to pay for lobster: Whole live lobsters cost $10-$17 per pound. Ordering during the summer, before Labor Day, will likely cost more.

Step 3: Add chairs, spacing evenly and at a comfortable distance from each other (leave guests elbow room for lobster cracking). For each place setting, add a dinner plate topped by a salad plate. Place a ramekin (for melted butter) to the top right of the plates.

Step 4: Wrap fork and knife in napkin and center on salad plate. Place cracker and lobster fork crosswise over plate. Place wine and water glasses at top right of each setting.

Step 5: Write the guest’s name on the butcher paper just above the plate. Stamp with a store-bought pattern that matches your party theme.

Step 6: Place 8 painted terra cotta pots planted with rye grass (allow 10 days to grow), 4ceramic pots filled with hydrangea blooms, and 4 bottles each of flat and sparkling water, down the center of the table.

JUST FOR FUN {Creative ideas worth the effort}

Signature Cocktail Bar Tom and Matt know what gets guests talking: the cocktails. So they offered up a handful of East Coast concoctions and let the guests order up. Caveat: Someone must man the bar full-time to pull this off.

Backyard Luminaries The couple strung five paper LED-light lanterns over the table and framed the pool with more than a dozen paper luminaries (votive candles in white, open paper bags anchored with sand).

Party Trademark Following the cardinal rule of party-planning, Tom and Matt played up a singular element to unify the event. Their signature lobster icon appeared on invitations, the drink menu, and on the table runner.