In Living Color
May 2012
Mary Whyte’s portrait of former crabber and oysterman Algernon Varn graced the cover of our February 2011 issue. That feature introduced “Working South,” the renowned watercolorist’s four-years-in-the-making series documenting the fading livelihoods of blue-collar workers across the region. As the celebrated show arrives at the Gibbes Museum of Art, we caught up with a handful of Mary’s models to find out how their lives have changed in the year or so since their paintings’ debuts 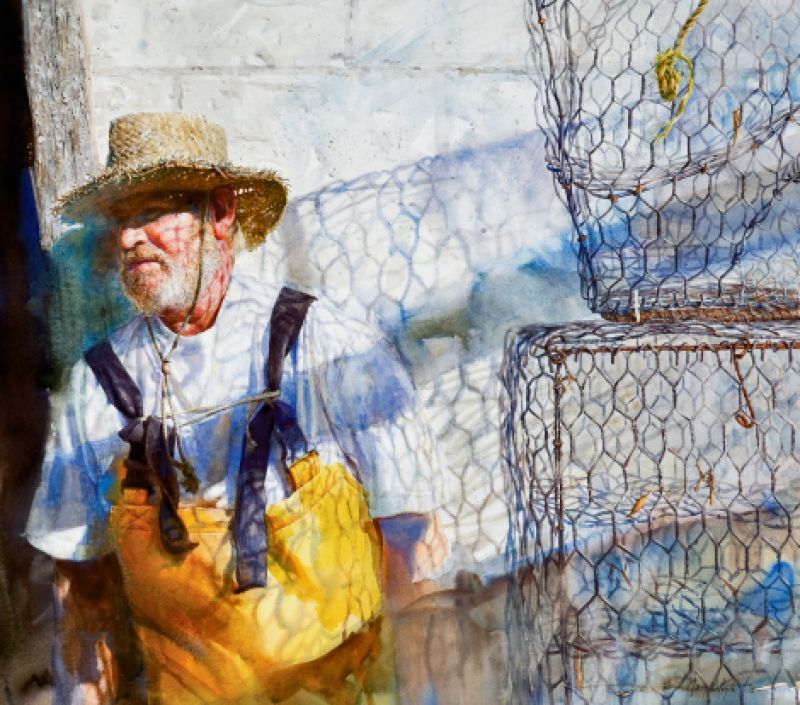 The room buzzed with approval, and the largely blue-collar crowd rode on an undercurrent of pride as they made their way through the galleries. Hog farmers stood shoulder-to-shoulder with fishermen, and a mill worker clad in flannel stood with her chin lifted in elegant repose. No matter his or her station, everyone in attendance became elevated that night.

On March 9, 2011, the Greenville County Museum of Art welcomed some 700 visitors to the opening night of “Working South.” But it wasn’t the record attendance that set that evening apart—it was the attendees themselves. Many had never before stepped foot inside a museum, and several would return to marvel at the portraits depicting the laborers of our region’s dying industries—milliners and mill workers, crabbers and craftsmen.

“One of the unexpected delights of this adventure has been meeting people I never would have known otherwise,” reflects Whyte, who asserts that this series has taught her to focus less on what is pretty and more on what is real and truthful. “And I’ve made friends along the way.” Friends like Thelma Coston and Darrel Landry, Elaine Rogers and Algernon Varn, women and men who are moving forward with their lives even as their livelihoods disappear.

His gray-blonde hair and beard had grown long, and his face weathered five more years, but the straw hat gave him away. When Algernon Varn (Algie to his friends) stepped into the Greenville County Museum of Art, patrons instantly knew him as the sun-wizened man from Whyte’s painting Trap, which was also the cover of the exhibit’s book. “She took me by the arm and back to my portrait,” he remembers. “People started snapping photos and asking me to sign the book. It was a humbling experience for this old fisherman and homebody. I usually blend in with the scenery.”

The backdrop of the portrait? Pin Point, Georgia. Home to the Moon River, where this third-generation crabber has toiled his entire life. And though his career had just about dried up by the time Whyte stepped aboard his trawler in 2007, Varn’s work along the river has continued, in a sense. Thanks to an anonymous benefactor, the A.S. Varn & Son, Inc. Crab & Oyster Processing Plant (known to locals simply as “the factory”) has been transformed into the Pin Point Heritage Museum.

A wealthy investor from Dallas bought the property for the explicit purpose of restoring the factory and preserving the history of this isolated little peninsula, “one of the last black communities on the coast that hasn’t been gobbled up for development,” explains Varn, who belongs to one of the town’s few white families. Though the museum doesn’t officially open to the public until this summer, visitors wander through the open gates daily. And, straw hat in hand, Varn graciously guides them through historical displays, cases of salvaged tools, and ultimately, the story of this waterman’s reclaimed life.

Elaine Rogers: By A Thread

Elaine Rogers belongs to the old-school class of laborers who believes in earning a weekly paycheck with hard, honest efforts. For 32 years, she stitched together a living at an Upstate textile mill, working side-by-side with the same women day in and day out. Weaving became her practiced art, a ritual that Whyte so eloquently captured in By A Thread. But that all changed in 2008, when the downtrodden, Easley-based Alice Manufacturing Company closed its Foster Plant, citing competition from China as its primary reason for shutting the factory after nearly 50 years of production. “I missed my friends, the people I worked with for years,” Rogers says, quietly. But shortly after the shutdown, the 66-year-old found herself back at work beside those same women, this time, as part of a new-school class.

With many of their longtime workers facing unemployment without a high-school diploma, executives at the factory offered to pay for them to get an education and earn their GEDs. Now, Monday through Thursday, Rogers heads to school to learn computer skills, English, and math. And though only four of the original mill workers remain in the program—“a lot of them quit and went to work somewhere else,” says Rogers—this steadfast student plans to see things through to the end. She expects to finish her degree this spring and then land a job with computers. “I don’t want to go back into textiles, because they’re on their way out,” she explains. Hopefully for Rogers, a new spin on a job well done is on its way in.

“Mary only stopped me for about 10 minutes when she came to Bayou La Batre, took my picture, and was gone,” says Darrel Landry. But in Whyte’s careful hands, that quick photograph would become Hull, a lasting watercolor study of the slowly sinking wooden boat-building industry. And when the second-generation Alabama craftsman witnessed his portrait in person at the Greenville opening, he found himself in awe. “To see what she did with the photo was incredible. She’s gifted.”

Looking at the sharp rise on the prow of a Landry Boat Works’ trawler as it gracefully carves through the water, one could say the same of this woodworker’s well-honed skills. “The first shrimp boats I ever built are still around,” he says. In fact, on a visit to Charleston last November, Landry caught sight of two vessels that he made in the mid-1970s motoring along a creek. In the wake of Hurricane Katrina and the BP oil spill, though, the Gulf’s commercial fishing industry hasn’t endured quite so well in recent years, and Landry found himself fixing boats more than fabricating them.

“I missed working with my hands,” he explains, “and at the end of the day looking at something I’d created.” So after he retired in 2010 and sold his share of the family boat yard in 2011, Landry picked up another craft, one he’d enjoyed at a younger age: making furniture. Just as with his “Apache” fleet, buyers seek out the artisan’s Adirondack chairs and end tables. And as it has since 1965, the ability to produce lasting pieces keeps Landry’s spirits afloat.

“May the Lord bless you real good,” wrote Thelma Coston, thanking Whyte for her donation to the church where the 83-year-old joins a devoted choir of seven to make a joyful noise. Every day, Coston finds much to be grateful for: a gift for music; a house she’s paid for, in full, in quaint Hacksneck, Virginia; and a well-earned reputation as one of the fastest crab pickers that side of the Chesapeake.

Though she’s retired from a lifetime of seafood processing, Coston occasionally helps fill special orders. “They like the way I bring the lump out,” she explains. “People say it’s tedious, but you just have to know how to go into the crab.” Some younger gals watch her, but most aren’t interested in learning the trade and don’t plan to return another season.

In fact, a thinning labor force, black-market sales, and a decrease in blues have slowly washed away the industry. Coston worked in five crab houses on this sliver of shoreline. Today, all but one are closed. Which is why this faithful handler, who began cracking claws at age six, has found one more thing to appreciate these days: the feeling captured in Whyte’s painting Disciple. “It took me way back, looked the way I picked crabs in yonder years,” she muses. “My face may be a little fuller, but that don’t bother me. It looks honest.” And honesty, she believes, is a real good blessing.