How to Make a Shrimp Roll 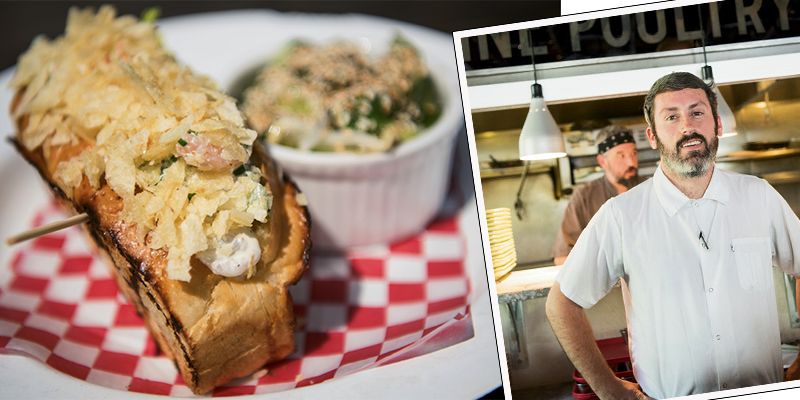 To prepare the sandwich, place the split-top roll side-down on a grill, flipping the roll as it toasts. Remove from heat and place lettuce inside the bread pocket. Arrange the shrimp salad on top of the lettuce and sprinkle crushed potato chips on top for extra crunch.

For the mayonnaise sauce: (Yields about 2 cups)

Mix all ingredients in a medium-size bowl. Use immediately or seal tightly and refrigerate for up to five days.

For the poached shrimp:

Add a splash of vinegar and a lemon cut in half to a large pot of heavily salted water. Bring to a boil. Pour in two pounds of peeled jumbo shrimp (21/25 count) and stir. Remove the pot from heat, cover, and let sit for about 10 minutes, until the shrimp become opaque. Remove the shrimp and place in an ice bath. Once cooled, cut the shrimp in half width-wise.

Mix all ingredients in a large bowl. Use immediately or refrigerate for up to five days.

■ Bread winner: “The bread makes or breaks a sandwich,” McLean says. “We like ours crispy on the outside and soft on the inside.” For the seafood roll, Leon’s buys hot dog buns from Brown’s Court Bakery.
■ Shell yeah: Perfect shellfish is a must when making a shrimp roll. McLean poaches local jumbo shrimp in salted water with a dash of vinegar and lemon for a tender, zingy bite.
■ Crunch factor: “Most things on our menu have a little crunch,” notes McLean. To add crispiness to the creamy shrimp salad, he sprinkles crushed-up Lays potato chips on top.
■ Wash it down: McLean recommends pairing the shrimp roll with a light cocktail, such as a Pimm’s Cup. Leon’s is made with Pimm’s No. 1, lemon-lime Shasta soda, and cucumbers. “It’s perfect for a steamy day in Charleston,” McLean says.

After working gigs in Pittsburgh and Cleveland, McLean took his culinary chops to Charleston in 2009. He started as chef de cuisine when Leon’s opened in 2013 and became head chef two years later. His signature shrimp roll, topped with crushed potato chips, is a summertime staple at the restaurant. “It fills you up, but it’s not as heavy as your typical summer cookout burger,” McLean says. “The shrimp salad is chilled and refreshing, especially on a hot day.”