How to Make a Mint Julep

The Kentucky Derby is off to a gallop this weekend. Celebrate the races with a traditional mint julep, or try Bar Mash’s caffeinated cold-brew twist on the classic 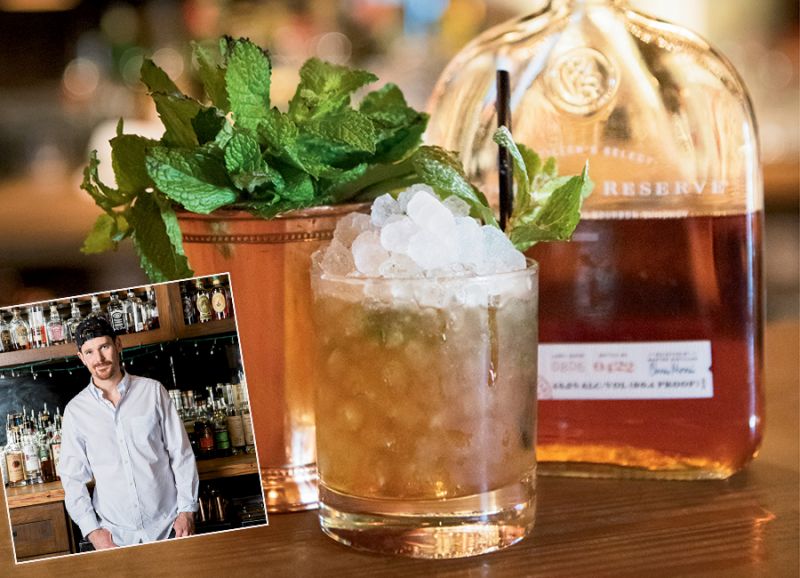 In a julep cup, add the mint leaves and the simple syrup. Lightly press the mint with a muddler to release the oils from the leaves. Pour a small amount of ice on top of the mint and syrup mixture, and then add half of the bourbon. Stir until the outside of the cup becomes very cold and condensation appears. Add another layer of ice, then top with the remaining Bourbon. Stir once again until proper dilution and temperature are achieved. Top with more pellet ice, so a “snow cone” is formed on top. Garnish with a mint sprig.

Make Bar Mash’s Cold Brew Coffee Julep: For a coffee julep, Nixon begins by gathering all of the same ingredients as the classic mint julep, but he uses Prichard’s Double Chocolate Bourbon for a mocha-inspired taste. “Chocolate pairs well with coffee, and also with mint,” he notes. He adds two extra ingredients to the recipe: 1½ ounces of cold brew coffee and two drops of Crude “Big Bear” Coffee + Cocoa bitters, which enhance the flavors of chocolate and java.

To make the drink, place the coffee, bitters, simple syrup, and mint leaves into a cup. Continue following the same recipe steps as the classic mint julep. For an extra minty taste, slap the mint sprig lightly on your arm before using it as a garnish. “Slapping the sprig releases the mint’s oils,” Nixon explains.

■ Proper cups: Though mint juleps are traditionally served in silver or pewter cups, copper vessels make a fine budget-friendly option. For the mint julep, Nixon uses a copper cup, while the cold brew coffee julep can be served in a glass tumbler or copper mug.


■ Top-shelf supplies: “Because mint juleps have such a short ingredient list—they’re just Bourbon, simple syrup, mint, and ice—you have to use high-quality ingredients,” Nixon notes.


■ Ice advice: “We purchase ours from Sonic Drive-In, because it has the best julep ice around,” says Nixon. The fast food chain sells the frozen pellets in bags to customers.


■ For coffee cocktails: Nixon likes the nitro cold brew made by Michael Mai, the coffee manager at Mercantile & Mash. “Infusing cold brew with nitrogen makes it creamy and stout-like, almost like Guinness,” he explains. “It’s delicious in drinks.”

Before he became bar manager at Bar Mash in 2015, Nixon honed his mixing skills while working at Bay Street Biergarten and Edmund’s Oast. He also practiced his craft at home “like a mad scientist,” he says, perfecting classic cocktail recipes along with frothy daiquiris and tiki drinks. Though Bar Mash is known for whiskey and beer, Nixon likes to throw other beverages into the mix, hosting events like Tropical Tuesdays. “I love to experiment,” he notes.