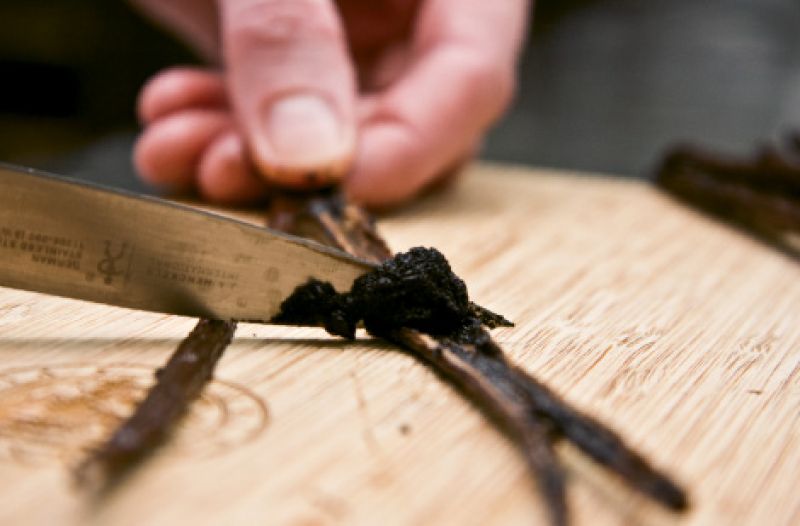 In the kitchen of Charleston Grill, executive pastry chef Emily Cookson bakes, soufflés, and dreams up desserts ranging from crème brûlée to milk chocolate mousse, strawberry parfait to bread and butter pudding. With stints at Woodlands Resort and Inn and Circa 1886 already on her résumé, Cookson has spent the last year perfecting Charleston Grill’s menu of creative confections. A secret ingredient? Vanilla beans.

One of those cooking show specialties home chefs often shy away from—“they’re pricier and more labor intensive than extract,” explains Cookson—vanilla beans make their way into most of this Johnson & Wales grad’s recipes. “I use vanilla like a chef uses salt, adding a pinch to any dish to enhance its flavor. And while extract will often do, the beans offer a stronger, more dimensional flavor.”

However, at $4 to $7 apiece, the pods can feel like an extravagance, so Cookson recommends using them primarily when you want to emphasize a dish’s vanilla flavor—“for example, in ice cream or crème brûlée,” she says.

Two varieties of the bean are widely accessible—Tahitian and Bourbon-Madagascar—and can be used interchangeably. Most grocery stores sell beans by the jar, though they can sometimes be found in the produce section.

“It is actually the seeds from the bean that you will cook with,” explains Cookson. “To remove them from the pod, hold it lengthwise and cut off the tip. With a paring knife, slice straight down the center so that the pod opens, then use the back of the knife to gently scrape out the seeds.”

As for the pod, it still contains valuable vanilla oils. “Bury it in your sugar storage bin for a flavored sweetener,” suggests Cookson. “You can also make a vanilla extract by pouring grain alcohol or vodka over the pod and allowing it to infuse for six months.”