15 Minutes with Benjamin Dennis
March 2016
WRITER:
Jenny Ouellette
PHOTOGRAPHER:
Emily Moore
For the last several years, Charleston’s own BJ Dennis has been making a name for himself in his hometown—not only as a highly sought-after personal chef and caterer, but also as a leading authority on Gullah/Geechee cuisine.We caught up with Dennis to learn more


CM: What sparked your interest in Gullah cooking?

BD: I loved history in school and later became really interested in my own culture and lineage. In the early 2000s, I was reading Charleston Receipts, and a line mentioned the African influence on Lowcountry cuisine. It clicked with me. I also lived in the Caribbean from 2004 to 2008, and the connections between the foods there and here blew my mind. When I came home, I started researching, talking to my elders, and working with historian Dr. David Shields. My grandfather grew up on Daniel Island, and so much of what he’d told me about the past I started to see in the old articles I was looking at.

CM: What are leading characteristics of the food?

BD: People often think of Gullah/Geechee and our pork, but back then, people ate more seafood and veggies than anything else. They also used various preservation methods, often cooking with sun-dried vegetables and salt-fish—fish that had been cleaned, salted, and hung on a line to dry. One dish, for example, featured sun-dried okra, canned tomatoes, and dried shrimp.

CM: Since starting your research, what’s surprised you most?

BD: Finding out about the hundreds of black classically trained chefs and caterers working here in the 18th and 19th centuries and after Reconstruction. I’m also learning about the use of benne seeds—not just sprinkling them on top, but also grinding them up into a powder to use in stews and broths. I’ve been using a lot of ground peanuts as a base as well as different oils—like benne, peanut, and coconut. My grandfather talked vividly of coconut trees on Daniel Island that his grandfather grew, which also shocked me.

CM: You were featured on the Anthony Bourdain: Parts Unknown season finale with Sean Brock. How did you get involved?

BD: Sean’s been one of my biggest supporters for a long time. I saw him three or four months before we shot the episode, and he asked if I’d talk about the Gullah/Geechee culture.

CM: Were there any moments you wish had made in on TV that didn’t?

BD: We only got five minutes or so on air, but our conversation in real life lasted more than an hour. It got pretty deep at times; we spoke about how African culture has shaped so much of the food and music of this country—and how that’s often not recognized.

CM: When did you learn to cook?

BD: I’m the middle child with two sisters, and I’d watch my mom in the kitchen. I never really cooked then, though a lot of my jobs growing up were in grocery stores or fast-food joints. I started working in kitchens at 19—first as a food runner, dishwasher, and busboy. I was going to Trident Technical College for business administration, but after one semester I transferred to the culinary program and graduated in 2002.

CM: Who were your mentors?

BD: In terms of refining me as a chef, Frank McMahon and Jeremiah Bacon. (I worked with Frank at Hank‘s in 2003 and with Jeremiah at Carolina’s from 2009 to 2011.) Truth be told, however, my earliest inspiration was watching Nigel Drayton when I was a busboy/fry cook at Hyman’s Seafood and also the guys on the line at Anson. They looked like me, talked like me, and had similar experiences growing up.

CM: What’s next for you?

BD: I’m working on my own restaurant, which I’d like to open in the next two to four years; I’m taking my time. I want it to be a Gullah/Geechee cultural center—a whole learning experience with amazing food. I’m also developing a cookbook with former City Paper editor Stephanie Barna and Nicole Taylor, who authored The Up South Cookbook: Chasing Dixie in a Brooklyn Kitchen. It’s still in the incubator stage. 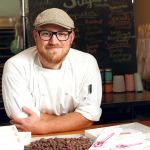 Chocolatier Michael Hoffman tends to stay behind the scenes, but his Bitte Chocolate milk and dark chocolate bars are garnering attention and selling fast at Sugar Bakeshop, Elliotborough Mini Bar, The Veggie Bin, and The Daily. We spoke with Hoffman about his bean-to-bar biz 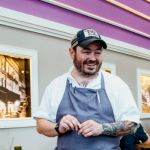