A Gullah Christmas
December 2007
WRITER:
Marion Sullivan
Celebrating the blessings of the season with a traditional Lowcountry feast 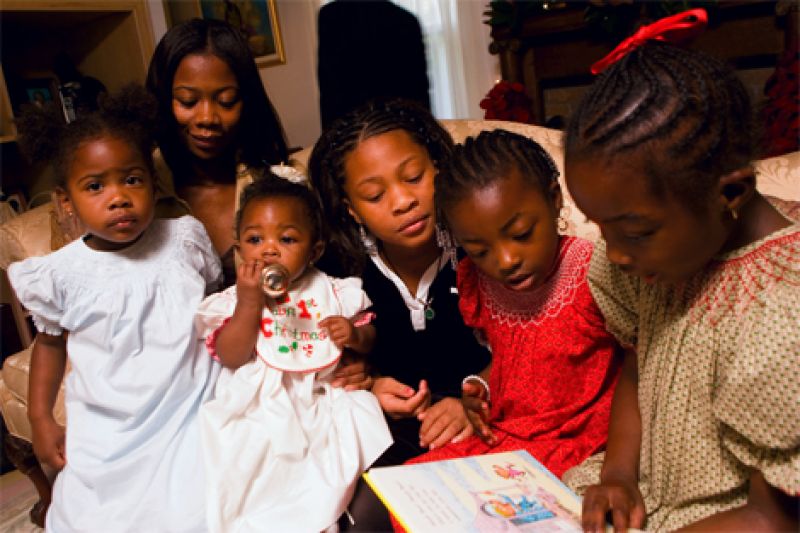 As Charlotte and Frank Jenkins welcome guests into their home in the Ten Mile community—where several generations of family gather to share a traditional holiday meal—mouthwatering aromas envelop the newcomers. It’s no small wonder, as the chef at the stove is the same culinary force behind Gullah Cuisine, the popular restaurant that the couple operates in Mount Pleasant.

Adept at preparing meals for many, Charlotte cooks for dozens every Christmas. She speaks of learning the craft at an early age from her mother, Julia Ascue, and her grandmother, Mary Gathers. Though her parents both worked, they chose to farm and raise pigs and chickens to put good food on the table. “My mother’s style was the result of growing up in my grandmother’s house and learning to cook in slave quarters. My grandmother taught me about flavors from the 1800s as well as the life of my ancestors.”

Charlotte grew up in Ten Mile in the house that her father built. Up until the Civil War, plantations populated this area; when the war ended, many freed slaves remained, and their properties have been passed down through generations.

Today, siblings, children, nieces, nephews, grandchildren, and grandnieces gather for this special meal. Frank set the turkey into the fryer on the porch just before guests arrived, leaving more room in the kitchen and ensuring that the main dish doesn’t hold up everything else—a wonderful thing when you’re cooking for a large crowd.

After family members greet each other with hugs and kisses, most of the gentlemen linger in the den while the women help Charlotte put finishing touches on the hearty meal. Some of the older cousins take turns reading their favorite books to the little ones beside a crackling fire, and niece-in-law Tanya Ascue’s stunning voice wafts up the stairs, accompanied by Henry Zellars, Jr., on the piano, singing “Silent Night” to her youngest daughter, nine-month-old Zacora. It is an especially sweet moment on this lovely day.

Though the kitchen has been buzzing for much of the morning, the activity level rises as Frank pulls the golden turkey from the fryer and sets it inside to rest. Son-in-law Martin Antonetti has been designated the turkey carver, and he calls over his oldest, Kevin, to show him how to slice the bird. Hoping to steal a bite, some of the children zone in, sneaking small pieces of the moist bird. Charlotte, sister Rita Worthy, sister-in-law Pearl Ascue, and niece Christi Ascue bustle in and out of the dining room with steaming dishes of okra soup, candied yams, oyster pilau, collards, and Hoppin’ John. Before folks dig in, Charlotte draws everyone into the dining room for to say grace, with many thanks for the blessings given her family and for being together on such a special occasion.

Then wine is poured, and sweet tea passed. Charlotte disappears into the kitchen to help fill the children’s plates—she obviously knows who the picky young eaters are—before directing the adults to dine. With a group that’s too large to all sit in one place, those who can’t squeeze around fill their plates and sit at tables in the den. Dressed in their holiday best, the little ones have a table of their own, colorfully decorated with jars of hard candy and peppermints, though the adults warn them not to spoil their appetites by sneaking the sweet temptations. And the loud hum that has continued throughout the house since guests began arriving at noon lowers to a murmur of oohs and aahs over the delights of the meal.

“People unfamiliar with Gullah cuisine are always surprised at how light it is,” Charlotte explains as plates are heaped with succulent turkey and all the fixings. “The recipes are simple, there’s not a lot of fat, and we use spices for flavor. Garlic and red pepper flakes add to the seasoning, and fresh lemon juice or vinegar can also bring up the taste.”

Simple though they may be, Charlotte’s dishes have come a long way since the first meal she ever cooked—liver with gravy and rice. At nine years old, she was responsible for feeding her father and eight brothers and sisters when her mother went to care for Charlotte’s namesake aunt—legendary for her Lowcountry cooking—who had become ill. “I remember my older brother Danny telling my mother that I did a great job,” recalls Charlotte. “I was so inspired by hearing that from my brother, who never, ever gave compliments, that I really began to take cooking seriously.”

And cook she did. Even during a stint in New York, Charlotte plied her talent by throwing dinner parties for friends. “I met Frank at one, we dated, and then he told me that he enjoyed my cooking so much that he decided to marry me,” she laughs. After they moved back to the Lowcountry, Charlotte developed additional skills helpful in opening Gullah Cuisine while taking classes in restaurant management at Johnson & Wales.

Soon the youngsters are clamoring for dessert, and as at all good Southern Christmas dinners, there’s an array of choices. In addition to Charlotte’s traditional sweet potato pie and Georgann’s apple pie, there’s bread pudding with hard sauce—a house staple at the restaurant. Tanya has also brought a carrot cake from Connie’s in Williamsburg County. “She made Craig and my wedding cake, so I ordered another special cake for today,” says Tanya, who married Charlotte’s nephew. It gets a decided thumbs-up from this discerning audience, no mean feat for a family spoiled by Charlotte’s cooking.

Champagne comes out for a toast to the meal and glasses are raised in thanks to the hosts. Happy children finally raid the candy jars. Young and old head for the piano. And the merriment of the day can be heard throughout this full and happy home.

“Through the years,
We all will be together,
If the Fates allow.
Hang a shining star
Upon the highest bough.
And have yourself
A merry little Christmas now.”