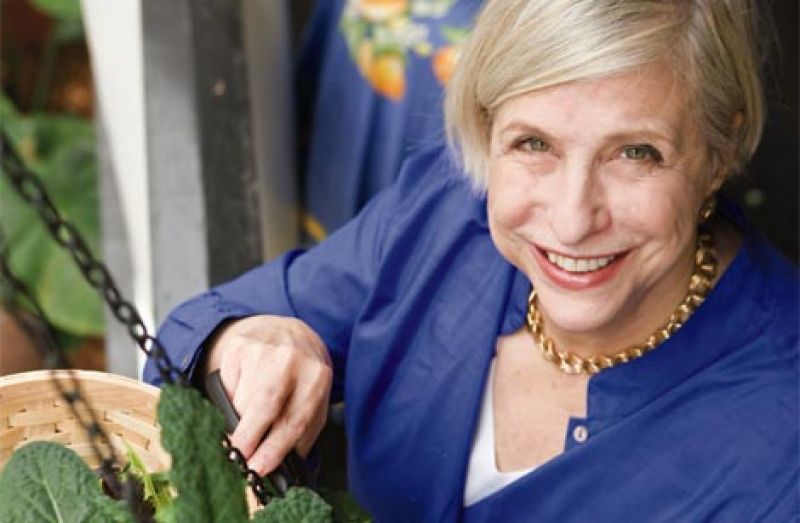 The first thing I see each morning is the orange tree outside our bedroom window. Stepping into the courtyard and breathing deep, I’m energized for the day by its aroma. I can also smell thyme, usually abundantly draped in a planter for sniffing or snipping, with tiny basil plants tucked in next to it when the weather permits. Another step down, I pass pansies, then some wild arugula—its multifaceted leaves filling in the legginess of nasturtiums—in planters swinging freely between the white columns of the piazza.

Opening the door to the garden, I can smell the fennel that runs riot, sometimes reaching the height of my garden wall. When entering through the outside gate, it’s nearly impossible to avoid brushing its multispoked flowers holding green seeds and releasing a lovely aroma, as fresh as mild anise. Shoots of wild arugula poke up through the bricks. Just past one of the large marjoram bushes with its snappy scent, I fetch the paper in the driveway. A few short strides more, and I can rub the Meyer lemon or the Kaffir lime leaves and treat myself to a citrus fragrance that lasts through breakfast. Ours may also be the only garden in Charleston with turnips growing in the front yard.

As the heat of summer arrives, the nasturtiums, pansies, coriander, and varieties of lettuce give way to basil, marjoram, and Charleston (or Thai) cilantro. And other summer plants, such as marigolds and borage, wend their way in.

Although not my earliest excursion into growing and using herbs, this attempt is my best. Parsley was the first herb I ever knew. It used to come dry in a small tin can and was recommended for most dishes. Mint was also predominant and canned, often used to accompany lamb (causing me, no doubt, to hate dried mint). My first real introduction to fresh herbs came during cooking school in England. Our principal had an extensive herb garden, and students were encouraged to pick from the abundance, experimenting as we went.

When I lived in Atlanta, my garden existed in giant pots outside my home. They sufficed for tidy herbs, but not meanderers like lemon balm, wild arugula, mint, fennel, coriander, and other favorites. So I stuck to varieties of rosemary, marjoram, thyme, and basil with occasional forays into parsley, coriander, and sage.

But Charleston is ideally situated for raising herbs, especially those that love heat. Herbs and edibles that grow other places in the spring and summer—such as pansies, coriander, lettuces, broccoli, Brussels sprouts, and nasturtiums—love our winters, as do Meyer and other lemons, oranges, turnips and their greens, Kaffir limes, lemongrass (a rather pushy, forceful plant that explodes into an unattractive tall clump but yields lemon flavor year-round), and sweet potatoes (as edible as the root, the leaves are delicious mixed with other greens or sautéed).

Having spent time as a chef in Majorca at a restaurant that grew its own herbs, tomatoes, figs, and food products and having grown as much as I could for my former restaurant in rural Georgia, I strove for a completely edible garden when my husband and I started planning for our downtown yard. Hence, all the above named, plus a few camellias (including the tea-producing kind), a bay tree, and two olive trees so tall they can be seen over the garden wall. I couldn’t bring myself to throw away the gardenias and hydrangeas, which aren’t poisonous but don’t taste particularly good, so they are the exceptions in my kitchen garden.

My husband’s goal was to avert the overwhelming upkeep that our previous garden—which was large and over-planted—required. He wanted very little (if any) grass and as small a yard as possible, welcoming an herb bed right outside our front door. The space has become the ideal garden, providing daily salads, frequent vegetables, and herbs to suit any aspiring gourmet. It is my joy, and the lack of grass is his—in addition to the taste those herbs elicit from everyday produce.

Let me make myself clear: I am not the gardener. During my time in Georgia, the heat of August would usually destroy my garden, my enthusiasm wilting with the vegetation. I was not the green thumb I wanted to be in those pre-watering-system days, but by fall, a new crop and a little cool weather would inspire me to clear and replant, and I always found a bit of poke salat in the garden to make a nice mess of greens. The true caretaker of our edible garden is the beautiful young owner of Living Colors landscaping, Jennifer Stringer, who plants and maintains our oasis. I think she likes doing it because she can see that my husband and I eat from it. I do pluck, I do pull dead flowers—occasionally, in the cool of the morning, clad in my nightgown, as I dash to grab the newspaper. And I am sometimes tempted to bend over and pull up a weed. But Jennifer does the hard work; she is the life and soul of the garden.

I do also “plant” things—like pottery and china, which I began doing in the garden of our previous home. One day, when my granddaughter was a babe in arms, she reached out for something in the china closet, causing the shelf to teeter and all the dishes to come crashing down. My daughter was distressed, and the startled baby cried. Observing these two flowers—who are vastly more important to me than the china—I made a decision. I took the broken pieces out and “planted” them conspicuously in the yard. Ever since, shards of china and pottery have dotted my garden like buried architectural treasures. A blue and gold urn lays on its side near the rosemary, cracked in two, perhaps nudged by the cat in years past. And out by the orange tree, there’s a plate that I purchased for a pittance at a small antiques shop in Arkansas and stuck in on its edge to radiate orange and blue. Having dinnerware in our edible garden seems rather appropriate, I think, and alludes to happy meals ahead.
My spring meal of choice is a light luncheon on the piazza or even in the garden. The myriad greens and herbs available in my yard make assembling a fresh salad easy work. For the fig, pear, arugula, and herb salad, I am not very exacting in my ingredients, using whatever leafy greens and lettuces I have on hand. In the past, I’ve also added coriander, sage, and chive flowers, but no matter the mix, I find this dish to be equally delicious each time.

The salad usually comprises a major portion of the meal, but the true crowd-pleaser arrives in the form of a whole red snapper. This preparation may be applied to smaller portions; however, filets and steaks don’t interest me much, perhaps because I love the drama of beautifully presenting an entire fish to a table full of guests.

Vanity impels me to use my own banana leaves for wrapping the snapper rather than purchasing them through the mail or at a specialty grocery. Though buffeted by winds and torn, these leaves are, after all, mine. While the fish bakes in the oven, the leaves puff up with steam and offer a festive feel to the occasion—a celebratory mood that’s only furthered by a light dessert of lemon curd puff pastries. Settled onto the piazza, I savor the flavors coaxed from spring’s bounty picked fresh from my garden.