French Connection
December 2008
PHOTOGRAPHER:
Peter Frank Edwards
A Charleston chef receives a coveted invitation to one of the food world highlights of the year 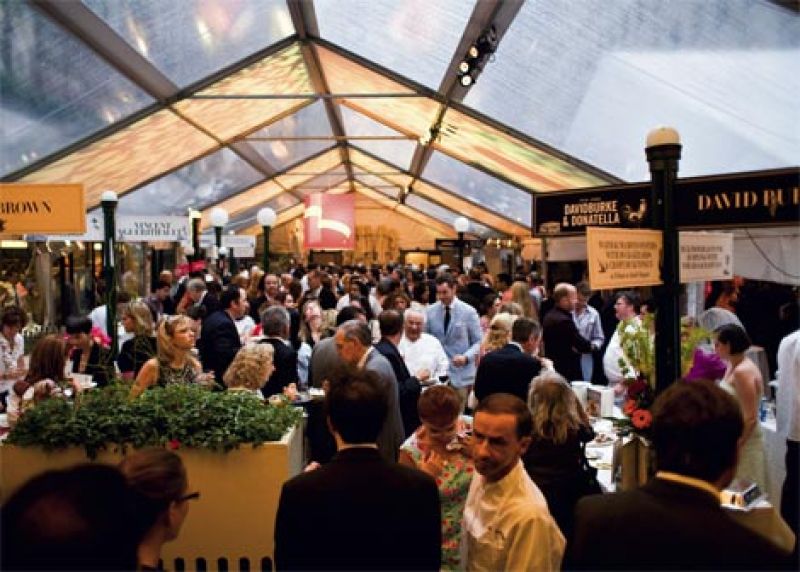 I don’t know if it was more the stuff of chefs’ dreams or those of the cocktail-dress-and-suit-wearing gourmands, but there we were, among the scents of sizzling butter and seared meat rising in the garden at Rockefeller Center and the sounds of Champagne corks popping, French being spoken in low tones in candlelit booths, plates and glasses clinking, even a rousing toast of “vive le fromage” by guests gathered around a table of crumbling cheeses streaked with blue veins. Attending that night were TV chefs and Holly­wood celebs; New York’s party set; food writers and photographers; and Charleston’s own Bob Waggoner, in his chef whites, serving up squab.

The event was a food-centered Citymeals-on-Wheels celebration, an annual fundraiser cofounded by the late James Beard in support of the nonprofit’s meals for homebound elderly in the city. Each year has a theme, and the 2008 event was a salute to the masters of French cuisine with 37 North American chefs (mostly from New York and the West) doing the cooking, and with many French chefs invited to taste and mingle.

They were nonchalant, these culinarians, their confidence high with their cream sauces and puffs, their scallop mousses, their foie gras, their prawns. And for $600, anyone could join the mass of well-heeled epicureans mobbing the booths for tasting plates. With a $2,500 VIP pass, a couple could hobnob half an hour early, have the night’s first lavender-sprig-garnished drinks, the first caviar egg cups, maybe bump into early-bird Kathleen Turner, who upon walking in gazed about and said, in her marvelous throaty voice, “My word, look at all of this.”

More than 1,000 people attended on that stormy June night—that morning, organizers covered the rink space in clear tenting, keeping out the rain but letting in city lights from above. One of the few chefs invited from the South, Waggoner was there because Gourmet sponsored the event, and editor Ruth Reichl personally invited him. (He received an e-mail from her a few days after she’d had dinner at the Charleston Grill during the 2008 Charleston Food + Wine Festival.)

Waggoner is French-trained, having cooked in several Michelin-rated restaurants in France for the first decade of his career, including the kitchens of three of the event’s honorees: Pierre Gagnaire, Marc Meneau, and Gerald Boyer. Later, Waggoner explained that in the restaurant world, “There are the French guys and the not-French guys. All the time, I tell people who work for me, if you want to get ahead in this industry, learn French. Then, if you ever meet Georges Blanc and he’s talking, you’ll know what he’s saying. You’ll be in.”

Midmorning on the day of the Crème de la Crème event, we met Waggoner in a compact kitchen space with a four-by-four flattop in the rabbit-warren-like basement of ‘21’ Club. Waggoner, who has a laid-back and easygoing personality, particularly for a chef, didn’t even break a sweat as he and longtime assistant Michelle Weaver cooked up 500 orders each of perfectly simmered and sauced pigeon crepinettes and veal sweetbreads. (His squab recipe was inspired by the Salmi de Pigeon served at Meneau’s restaurant L’Espérance, where Waggoner cooked in the 1980s.) That morning he managed four sauté pans handily and, before we left, took a break to guide us up and down the underground staircases and winding hallways that led to ‘21’ Club’s Prohibition-era wine cellar—the one with the 18-inch-thick cement door with a secret opening procedure that involves pushing a thin wire through just the right one of some 120 pinprick holes in the cement.

While at ‘21,’ Waggoner told us that for three days he’d been on his own spontaneous city tour that mixed two of his loves: food and photography. At one point, he walked 30 blocks to Canal Street and back, stopping only to take pictures and eat. He also went to Dovetail one night to sample the cooking of young chef John Fraser; stayed out another night until 3 a.m. with many of the French chefs and Francophiles at Jean Georges in Trump Tower; and went for the chef’s tasting menu at WD-50 for some of the “wackiest, ultra-modern, anything-but-regular food that’s fun, chemical, and weird. My dad wouldn’t have understood anything we had for dinner.” There, he said his friend chef Wylie Dufresne served at least a dozen courses of the restaurant’s molecular gastronomy, including a pizza deconstructed into a line of “pebbles,” a foie gras terrine that had been melted and reformed into a “knot foie,” and an eggs Benedict condensed to the size of a spoon.

Before long, it was time to follow the busy sidewalks of 52nd Street to Rockefeller Center, with Waggoner and Weaver pushing carts stacked with warming trays. Less than two hours later, the first guests would arrive. Each booth had a Parisian-style street sign above, announcing the chef, restaurant, and dishes to be sampled. Some tables drew lines; others did not, with those chefs and servers having to do some wooing. As the first queues began forming, one man said, “Let the games begin,” clapping his hands at seeing Waggoner’s veal sweetbreads. The Charleston Grill table, while not decorated with fancy displays or flowers like many others, did a fine and steady “business” all night. (Chef Waggoner told us earlier, “Our focus is on the food, and we’re not going to run out.” They didn’t.)

As more people poured in, the atmosphere became increasingly steamy and head-spinningly intoxicating (or maybe it was the delicious free-flowing Champagne). I tasted as much as I could, and some of my favorites were the Braised Kobe Beef Short Ribs with Fresh Morel Cream and Chive, a melty comfort dish by Joachim Splichal; the completely fresh Tomato Gazpacho with Tomato Sorbet and Basil by Joel Antunes of the Oak Room; Chef Bob’s sweetbreads with a lick-the-plate Granny Smith Vidalia Compote (I still can’t believe Weaver chopped all those apples in time); and the delicious Caviar and Dill Egg Crème—served in an eggshell with the top removed—that chef Jean-Georges Vongerichten personally handed me. (Star sighting: actor Kyle MacLachlan and his friends walked up to the Jean Georges booth just as I got my egg.)

Everywhere that night, you could feel the joy of the guests, and particularly of the chef peers being together, honoring their craft and the sharing of good food and drink, plus helping a meaningful charitable cause. “By far, it was the coolest event I’ve ever been invited to,” Waggoner told me a few days later. But I’d already figured that out—the last I saw of our Charleston chef, he’d finished cooking and serving the throngs. The party was winding down, and there he was, all smiles, dancing to the band’s “Lady Marmalade,” while raindrops streaked the clear vinyl above.