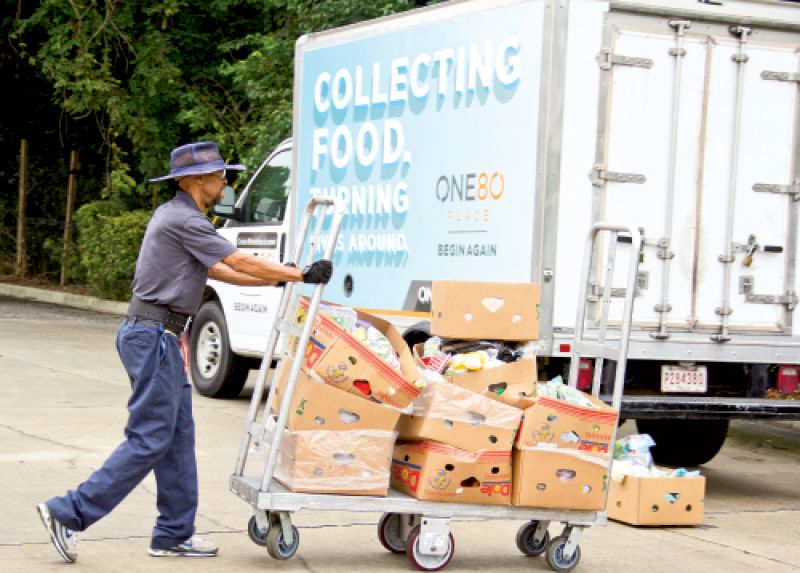 It’s a Friday morning, and a limp rain drizzles outside the sleek new home of One80 Place (formerly Crisis Ministries). Inside, despite the gray, Darrell Brutley forges from lobby to kitchen, greeting the staff with a bright “good morning” and setting his wide-brim hat against the rain before pushing into the parking lot. As operator of the nonprofit’s Food Rescue Truck, he visits restaurants and groceries to collect salvageable provisions for those in need. And though his assignment is food, this road philosopher knows his gathering feeds a much bigger mission.

“It’s about nourishing the whole person,” he says, noting that the organization not only feeds homeless locals, but also serves up legal, medical, housing, and job assistance.

In the refrigerated truck’s chilly cab, Brutley scans his itinerary, though he knows the route by heart. Stop one, Chipotle. “I like to get there by nine, so I’m out before the lunch rush,” he says. “The donors are instrumental in what we do. I want to help them help us.” Journeying west on I-26, the 58-year-old talks logistics: he’s behind the wheel Monday through Friday, roughly six hours a day, buzzing from Coburg Dairy, Red Lobster, and Christophe Artisan Chocolatier-Patissier to Whole Foods, BI-LO, Bishop Gadsden, and more, gathering some 4,000 pounds of food and logging about 750 miles each week. Indeed, Brutley has travelled a long road to arrive at this station, from a Philadelphia boyhood to a decade in the Navy to a stint in 2013 as a resident with the very shelter for which he now works.

Arriving at his Rivers Avenue destination, he offers the manager a handshake and a friendly clap on the back, then sets about weighing and loading fare left from the previous night: 22 pounds of rice and 11 of chicken, steak, and pork. After a thankful salute to the staff, he heads for stop two, a North Charleston BI-LO. “We get a smorgasbord from the supermarkets,” he says. This day’s haul includes 279 pounds of tomatoes, melons, oranges, English muffins, sausages, bacon, shredded pork, turkey drumsticks, and bagged salads just one day shy of their expirations.

Back at One80 Place, Brutley spends another hour or so sorting the goods, discarding any produce too far past its prime. The culinary team sets to work piecing the bounty into the next day’s meals: a simple breakfast, brown-bag sandwiches, 200 hot lunches, and nearly as many dinners. The generous donations allow them to do it all on a shoestring food budget. It’s four o’clock, and a line of men, hungry for supper and kind company, begins to form outside. “Now this,” nods Brutley, “this is what I call soul food.”