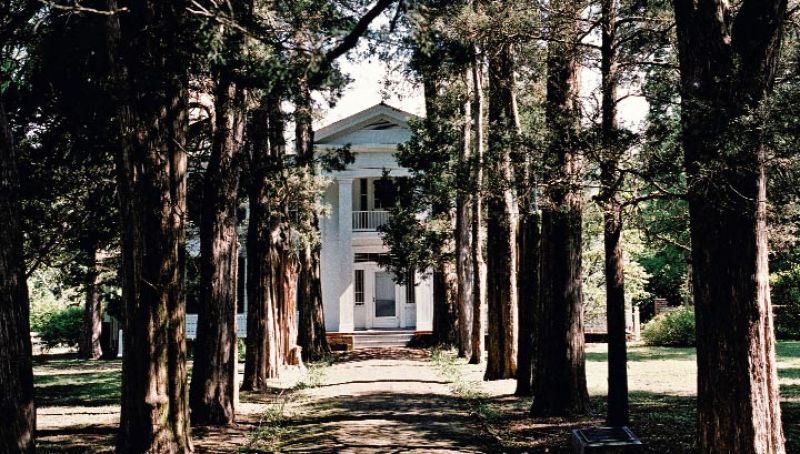 Walking up the alley of cedars on a chilly morning in Oxford, Mississippi, there’s the feeling that you’ve arrived at one of those heady places, thick-aired with the stories and life that you imagine and know must have existed there—at least that’s the way it feels to a writer (to me, at that moment) who wonders about the effect of place on writing, or conversely, the effect that a writer can have on a specific place.

I’d come to Rowan Oak, William Faulkner’s white-columned house where the Nobel- and Pulitzer-Prize-winning author lived for 32 years, writing stories of the South in flux—complicated, powerful tales. There looked to be no one else about, and I pushed open the front door—Faulkner’s front door. To the right was a small desk, and then a parlor with a piano and velvet chaises to the left that appeared to be caught in a certain kind of mid-century South. I heard a man ask, “Are you the writer giving the reading tonight at Square Books?” I looked around. No, I wasn’t giving a reading, but it became clear that the man was speaking to me. Obviously, I’d come to a place where the first assumption is that someone is a writer.

The man, it turned out, was William Griffith, who works for the University of Mississippi as curator of Faulkner’s longtime home, which is open to the public. He invited me to walk the rooms of the two-story house, which he explained had been left just about as it was in 1962 when Faulkner died. When asked, Griffith offered many stories and was patient with questions. He reminded me of Faulkner’s curious interest in mules—there’s a mule painting in the author’s writing room—and Griffith repeated Faulkner’s famous quote, “A mule will labor 10 years willingly and patiently for you for the privilege of kicking you once.” The curator spoke of Faulkner’s longtime competitive ire about Ernest Hemingway—even though the two never met—and of Faulkner’s biting review of Old Man and the Sea.

Griffith said the author enjoyed photography and shot scenery and portraits around Rowan Oak with his Leica cameras. I listened and took in what I could of the details of this private world with the curiosity and interest you get when visiting famous homesteads—Hemingway’s house in Key West, Jefferson’s Monticello, even Graceland.

Except, unlike those, on that day there were no crowds at Rowan Oak. (The name of the home, by the way, comes not from a grand tree on the property, but from a Celtic legend. Griffith explained that Faulkner purposely gave his home a name that could be a sort of filter of guests: they would either understand immediately, or ask, as I did, “Where’s the oak?”)

Like any visitor who pays the small admission fee, I pretty much had free run of the house. I stood in the kitchen with its old toasters and spatulas in place, and in the hall where a large black telephone still sits on a corner shelf with Faulkner’s handwrittten names and telephone numbers on the wall. The prolific author apparently had no problem using walls as notebooks. In his first floor office—where Faulkner’s typewriter is still on its table—he’d used graphite and red pencils to outline the plot of A Fable high on the wall around the room. The notes are still there. And it was for just this kind of sight that I’d made the Mississippi pilgrimage—to see something of the places, people, and landscape that have inspired so many writers: Eudora Welty, Richard Wright, Tennessee Williams. The list goes on and on.

The day before, I’d come on a direct flight into Memphis and driven straight to Oxford, making the 90-mile trek to stay in a cabin at the edge of a field of grass and yellow meadowlarks. Photographer Peter Frank Edwards was along too, with designs on taking in some blues as well as literary sights. The Blue Creek Cabin, a place more filled with luxury and comfort than the name may indicate, was a few miles out of town. From there, it was an easy drive to the courthouse square of Oxford, which, at that time, was being painted and renovated, likely in part to get ready for the presidential candidate’s debate held there last September.

At the square’s center, the tall courthouse, completely wrapped in scaffolding, was getting a whitewash. I’d heard that there was a Faulkner plaque on that building, so I walked up and asked the painting crew, who were all dressed in white jumpsuits. The men knew exactly what I was looking for, and one jumped down from the scaffold and led me through the dropcloths and paint cans straight to the plaque. Then the painter looked it over, too, reading aloud the text from Faulkner’s Requiem for a Nun: “‘Above all, the courthouse, the center, the focus, the hub sitting looming in the center of the county’s circumference, like a single cloud in the ring of the horizon.’” I remember that when this kind man finished reading, it seemed everything was quiet there for a few seconds, even in the din and dust of construction and the carloads of Ole Miss students circling the square.

Beyond that literary epicenter, the exploring continued. First up was to spend some time in the famous independent bookstore Square Books, where everyone is either drinking coffee or looking at book jackets or both. The rest of the square is clothing shops, shoe stores, restaurants, and art and craft galleries. In Bottletree Bakery, we sat on stools at a long, low counter and ate hot bread and drank coffee while looking at bottletrees and other folk art while a Beatles album played “Paperback Writer.”

From there we drove the eight miles to tiny Taylor to walk through a couple of art galleries and check out Taylor Grocery. The very rustic 19th-century storefront houses a restaurant famous for its fried catfish and steak. We’d dine there later, as well as at the Yocona Inn, another eating place in the countryside that draws people from Oxford. (Because of county liquor laws, both have a BYOB policy. At Yocona, in a 1940s gas station, there’s a corkscrew and stack of plastic cups on the picnic tables in the outdoor waiting area, a courtesy for guests bringing wine.)

Back in Oxford, we walked around the Ole Miss campus, where a woman told us that on tailgating days, “the chafing dishes in the Grove are filled with food that would rival Paula Deen.” And we’d stop on North Lamar to buy a pound of crawfish boil with sausage, corn, and potatoes from one of the Petermann brothers, who cook up the crawfish on a red trailer downtown on weekends from January to June.

To complete this three-day journey, we drove west across rural Mississippi for 70 miles to the Delta to check out the blues clubs of Clarksdale. There, we stayed at the Shack Up Inn, where the rooms are old sharecropper shacks gathered around a cotton-gin-turned-motel. We went to the Ground Zero Blues Club but didn’t see actor Morgan Freeman, one of the owners. We ate more crawfish at a new restaurant, RUST, with its cool interior, including one room with deer heads on each wall. A thunderstorm knocked the lights out for several minutes while we were there, and the RUST chef, holding a candle, went straight to the upright piano and played until the lights returned. The music never seems to stop in Clarksdale.

The next morning, the first person we met on Delta Avenue was bluesman T-Model Ford, who was sitting in a folding chair, eating eggs and toast from a foam tray and waiting for the Cat Head Delta Blues store to open. He told us he’d been hired to play a sidewalk concert and would sing and play guitar again at a festival later that day. Although right then, it was just T-Model Ford, three or four of his family members, and us. “When they find out I’m here, they gonna fill this place up,” the 80-something bluesman said. “Everybody wants to play with T-Model.”

And he was right. As soon as he lifted his black Peavey guitar from the case, a crowd started to fill from the just-empty streets, walking up and waiting for the music. And once he finally tuned his guitar, got the amplifiers going the way he wanted, and sang, the blues came slow and soulful—and because it was Mississippi—with some storytelling in between.