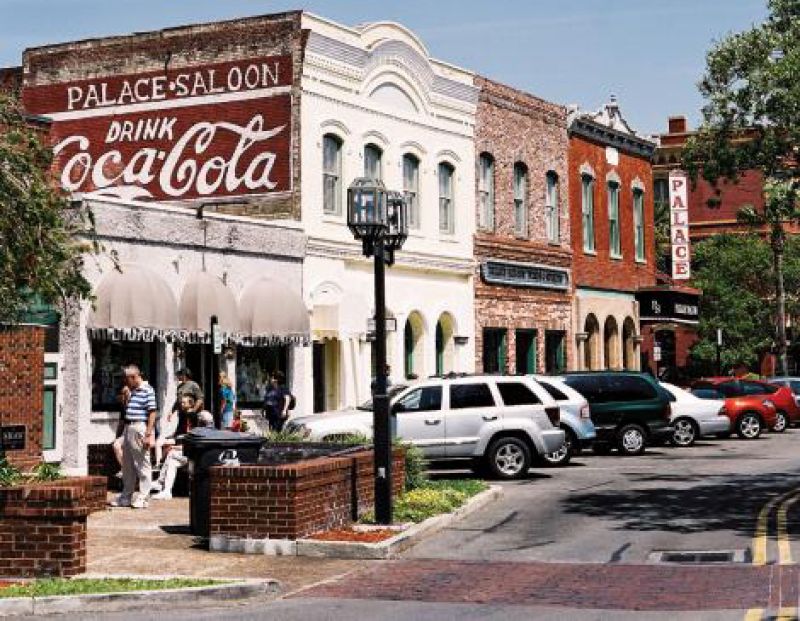 There was a breeze in Fernandina Beach again, blowing through the picket-fenced yards on Alachua Street, over the salt creeks on Atlantic Avenue. On other visits, I remember even wilder gusts jangling the rigging on the shrimp boats and sailboats at the city docks. But this time, the early May ocean breeze was simply pleasant. Whispers of fresh salt air blew past while we walked along the Centre Street shops and, after dark, sat for dinner at a table on the patio at Le Clos, a French restaurant in a 100-year-old cottage a block back from the harbor. (Le Clos specializes in local fish, offering dishes like a beurre-rich grouper with lemon-caper sauce.)

If you’ve only dipped into the Sunshine State for Disney or points further south, this is a very different slice of Florida. Just a four-hour drive south of Charleston and 20 miles east of I-95, Amelia Island’s sandy shoreline is the first beach on the Atlantic side. The island’s historic port town of Fernandina Beach fronts a bay made by three rivers—St. Mary’s, Cumberland, and Amelia—with the wild tangled forests of Cumberland Island, Georgia, in near view.

There’s no Mickey Mouse feel here. Rather, a sense of history rules, and the island is rich in places with character. Known as the state’s oldest operating hotel, the circa-1857 Florida House Inn—including its Frisky Mermaid Bar—was reopened in December. One of the most popular locals’ places is a hamburger joint in a long-defunct gas station. (You’ll understand why once you find T-Rays and taste the burgers.) The annual spring shrimp festival is named the Isle of Eight Flags, and you’ll often see mention that Fernandina Beach has been ruled by eight countries, including those of France and Spain, whose King Ferdinand is its namesake. (Longtime restaurant España, known for its tasty paella, is a downtown reminder of those Spanish roots.)

On this trip, we drove immediately to the Fernandina Beach waterfront and checked into a Hampton Inn expanded from an historic Victorian building (the water-view suites are spacious, with two rooms) and then walked across the street to board a tour boat for a 90-minute harbor cruise. While the captain steered the craft—it was open-air but with a convertible roof to block the sun—the dozen or so passengers sat on cushioned benches and listened to a colorful speaking guide, Florida native Ellyn Morgan, talk about the Carnegie family building mansions on nearby Cumberland Island, and of John Kennedy Jr.’s famous 1996 wedding to Carolyn Bessette in a tiny, wood-frame chapel there.

Morgan also offered tidbits about local lore and wildlife behavior. “The stingrays here get to be the size of Volkswagens, and right now they’re breeding, so you might see them jumping and doing somersaults,” she said as we motored through the bay. We didn’t see that spectacle, but in a mud-bank-edged creek that winds through spartina grass off of Cumberland Island, the captain cut the motor, and we watched dolphins jump from the creek and thrash on the low tide mud bank to catch fish they’d chased right out of the water. I’ve seen this before near Daufuskie Island, but it was again an amazing sight, known to be unique to the southern coasts of South Carolina and Georgia.

After the tour, with salty sea spray still on our faces, we drove across the southern, Atlantic-facing side of Amelia Island to Salt, a lounge and restaurant overlooking the tall ocean dunes at the clubby Ritz-Carlton. Inside, the French-accented manager, Isabelle Chety from Bordeaux, showed us past the fireplaces, finely upholstered couches, and tables of the lounge to the chef’s table deep inside the kitchen. From a glass-walled room, there’s an unobstructed view of the kitchen crew. It’s an exciting scene for Food Network types, with the staff in white coats and tall toques—everyone knowing just what to do—buzzing around, searing scallops, arranging micro-greens, cooking down sauces, and grilling steaks over wood fires.

The restaurant serves selected salts—in flakes or coarse or fine crystals, and in colors from white to amber, pink to black—with each dish. That night, one of the house-made blends included dehydrated grapefruit; another was blended with black garlic and served with various appetizers including tuna tartare, seared scallions, breads and unsalted butter, and tapioca chips. “We’re always experimenting,” chef Richard Gras explained. “We haven’t found anything we can’t mix with salt.”

Back on the island’s bay side in Fernandina Beach, we woke early the next day and hopped on bicycles to tour around the many blocks of the historic district with its well-kept churches, civic buildings, and Victorian homes. (I loved the stretch of houses on North 6th Street as well as beautiful Saint Peter’s Cemetery on a hillside on North 9th Street.) It’s an easy two-mile ride from the historic neighborhoods to the Atlantic Ocean side of the island, with its 13 miles of beaches lined with new and vintage beach houses, sundry shops for towels and plastic pails, public beach walkovers, and an oceanfront mini golf course. Horses are also allowed on the hard pale sand, and in a couple of places, cars are, too.

There are some interesting sights along the way. The black-and-white Amelia Island Lighthouse set up on a hill can be seen from the causeway. And the maritime forest gives lots of shade to the winding roads at the Fort Clinch State Park, where visitors can ride mountain bikes or hike on forest trails, camp on a wild beach with tall dunes, fish from a half-mile-long pier, or check out the brick walls and beachfront cannons of the Civil War-era Fort Clinch.

When we pedaled through the park, I saw huge sandy patches filled with the yellow blooms of the prickly pear cactus. I’ve never seen so many. Beyond, some of the natural sand dunes must have been 25 feet tall. And everywhere we went, here and there, was that sweet Amelia Island breeze.