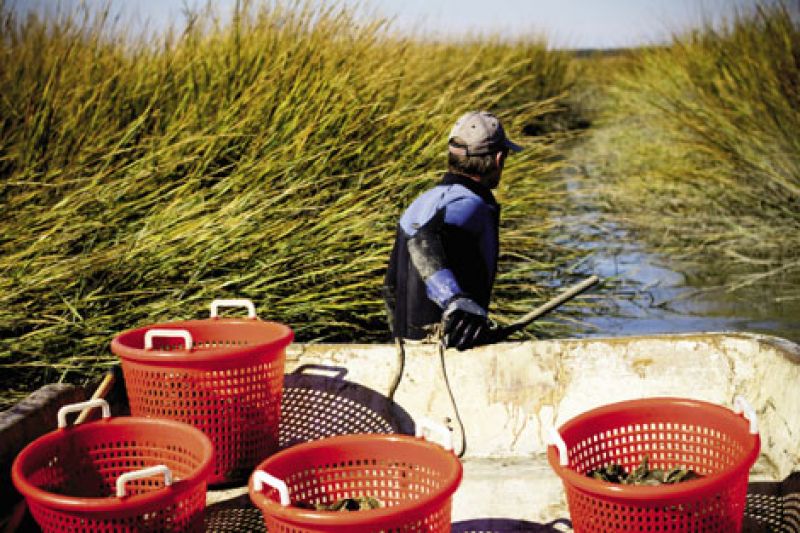 Everyone knows him as “Clammer Dave,” and most agree that he sells some of the freshest seafood in town. But had you been introduced to Dave Belanger 12 years ago, you would have met an agriculturist, business consultant, and former cattle manager. “In 1998, I was consulting at a clam farm and asked if I could trade my fee for a parcel of seed clams,” he recalls. “I loaded them up in my sea kayak and planted them in several areas north of Charleston Harbor.” That experiment proved to be the cultivator of an entire business model.

Today, as owner of Clammer Dave’s Sustainable Gourmet, Belanger buys seed clams from area hatcheries and raises them on 25 acres of intertidal bottom leased from the state. He then sells the shellfish to restaurants as far away as Mario Batali’s Del Posto in New York City. Still, he may be due for a new nickname, because lately, local foodies have been buzzing over the signature oysters, Capers Blades, that he introduced in 2007.

These mollusks start out as clusters, harvested from designated oyster banks in the pristine waters near Capers Island Wildlife Refuge. Belanger and his team cull them by hand into single selects, using a chisel-and-stone process dating back some 200 years to the era of slave labor. The oysters then enjoy another dip in the ocean, placed in special racks where the highly oxygenated surface waters of Capers Inlet clean them of sediment and silt while allowing the shells to lengthen and the flesh to fully expand. “These processes purge the grit from inside and outside the shells and retain extra seawater,” explains Belanger. The resulting oysters present a clean, flavorful bite, with a salty liquor that rivals examples from colder waters far to our north.

Chefs Mike Lata and Sean Brock were quick to adopt Capers Blades, helping Belanger refine his process and standards, and the premium oysters are now served at area eateries ranging from Fish to La Pizzeria. Fortunately for locals, Belanger’s seafood can be enjoyed at home as well, as he launched the only shellfish CSA on the East Coast in 2009. Oysters are offered in season and clams year-round, with shares becoming available again this spring. For details, visit clammerdave.com.