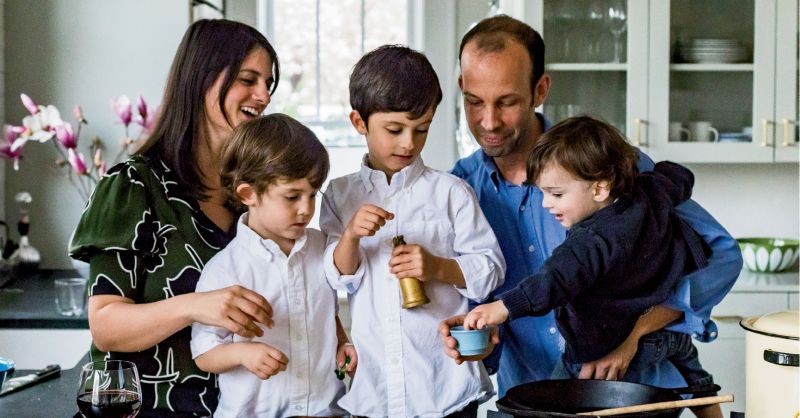 When asked to describe his job, Matt Lee simply says, “freelancer.” It’s a boiled-down title for a career gumbo that mixes cookbook author, food writer, cooking show host, and co-owner (with his brother Ted) of The Lee Bros. Boiled Peanuts Catalogue. He’s also husband to Gia, a realtor, and father to three boys under the age of seven. Due to the family’s busy schedule, dinners at the Lee household often need all hands on deck to succeed.

Though Matt makes a living writing about Southern cuisine, his family’s home menus are worldlier. Gia’s Italian heritage inspires marinara and Bolognese, while tortillas transform leftovers into tacos. The couple also has an affinity for spicy Asian dishes, spiking everything from spaghetti to salmon with chili oil. Their experiments sometimes get upturned noses: “If the meal is too wild for the kids, they might have frozen pizza,” says Matt, “especially if Gia and I have planned an ambitious dinner that we want to savor.”

For the pragmatic parents, mealtimes are about balancing healthy eating with common sense. “We buy organic when possible, but we also have a block of Velveeta in the pantry,” Matt jokes. While he prefers to purchase sustainable, wild-caught salmon, he shares a “dirty little secret”: a fatty farmed filet is much more bulletproof in the home kitchen. “It can be slightly overcooked and still be fall-apart tender and delicious,” he explains. Matt likes to crisp his fish skins and then top them with buttermilk mint sauce—a versatile dressing that works with anything from seafood to butterbeans and pork chops.

For a crunchy side, Matt roasts cauliflower using his brother Ted’s recipe. After he thinly slices the vegetable, Matt’s boys may lend a hand in arranging the florets onto a sheet pan. “We can usually ‘Tom Sawyer’ the kids into helping in the kitchen,” he laughs.

Matt and Gia elevate meals with their homegrown produce. A soffritto of carrots and onions adds sweetness to a side dish of collard, kale, mustard, and turnip greens. “No matter the blend, the important part is finding the right dose of salinity, pepper, and meaty smoke,” he explains. For the latter, Matt takes cues from Princess Pamela’s Soul Food Cookbook, a tome of soul food originally printed in 1969 that he and Ted republished in February.

When juggling work and family life, Matt finds a common ground in his kitchen. “Food serves as a kind of casual, natural language among us all,” Matt reflects. “Cooking sustains us, but also offers a way into so many other peoples’ lives.”

Sitting Down to Eat with Matt Lee

Works: With his brother, Ted, as a cookbook author and writer on food, history, travel, and anthropology
Lives: In West Ashley with his wife, Gia, and sons Arthur (seven), Lorenzo (five), and George (two)
Go-to Meal: “We make cheese quesadillas in a cast-iron skillet for the kids, then Gia and I spice ours up with pico de gallo with raw chilies from our garden.”