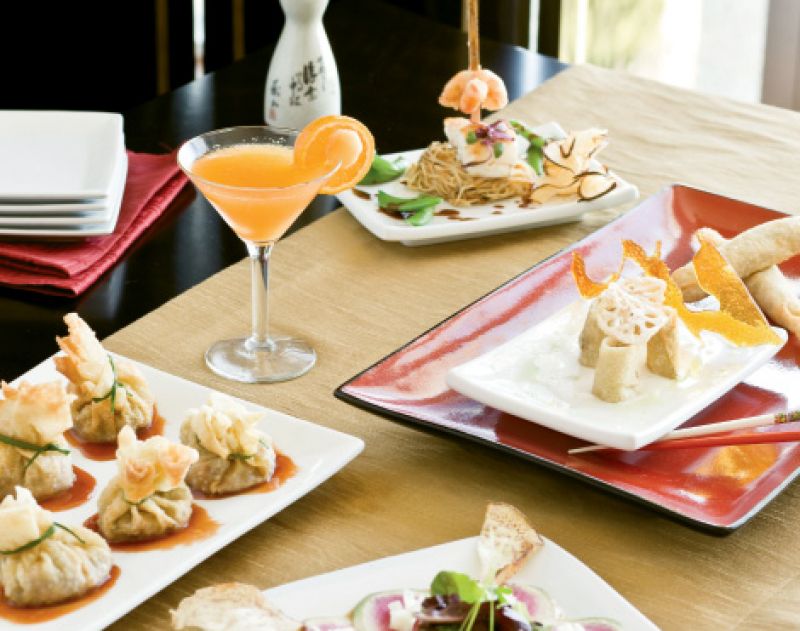 Stumped on serving up Spoleto?

Almost everyone entertains during these weeks of festivities, but many find themselves puzzling over how to pull together a tastefully themed party. We decided to turn to a professional, asking chef Iverson Brownell to take a cue from this year’s lineup and give us a menu with wow-power that wouldn’t break the bank. With his business, Iverson Catering, operating in both Charleston and Park City to serve a star-studded client list, this creative culinarian knows how to rise to a challenge.

Given the popularity of Pan-Asian cuisine, the highly artistic Brownell gravitated toward the intriguing, multilayered production Dogugaeshi, in which creator Basil Twist revives an ancient form of Japanese puppet theater. Crafting a pre-performance menu beyond sushi, Brownell balanced one hors d’oeuvre with two small plates and a dessert, so hosts can select a single dish or serve up the entire menu. Brownell also invited in longtime collaborator Boris Van Dyck from ICEBOX bar service, who fashioned a ginger-spiked saketini and a sake bar that would please even a Japanese expat. Their resulting East-meets-West
fusion set the stage splendidly for Dogugaeshi while honoring Spoleto’s spirit of invention.

Hors D’oeuvre
B rownell notes that “Sambal Oelek gives just the right Asian kick to the golden purses,” which include Angus flank steak, sweet chili sauce, spring onions, and water chestnuts. This sauce, which originated in Malaysia, adds an intense bite with the flavors of freshly chopped chilies.
(It’s said to contain pepper combinations of habañero, bird’s-eye, Spanish, cayenne, Madame Jeanette, and Naga Jolokia.) Though you can make your own (recipes abound on the Internet), it’s so inexpensive that it hardly seems worth the effort.

First Course
Local greens take this salad from satisfying to sublime. Instead of the ubiquitous mixed greens found in plastic containers in every supermarket, look for bunches of fresh arugula, watercress, and delicate mixes of mesclun at a farmers market. Brownell also includes just-picked lemon basil for a garden-fresh note that will leave guests guessing.
An artistic chef with a flair for drawing and painting, Iverson likes to treat a plate like a blank canvas. “How the food appeals to your eye definitely effects how much you’re going to like it,” he says. “Look at what the watermelon radish brings to the salad. Beyond its unique delicacy of flavor, there’s its size and rainbow hue. It’s all about composition.”

Main Dish
An outdoorsman who was once featured on ESPN’s Offshore Adventures, Brownell likes to showcase seafood on his menus. “There has been some concern about the overfishing of black sea bass in the South Atlantic region,” he says. “Were sustainability to become an issue, I would substitute grouper for the sea bass in this dish.” He also notes that he’s a staunch advocate of Wild American Shrimp and supports the local industry by including their catch atop this dish.

Dessert
“This is our riff on Pan-fusion bananas Foster,” Brownell says of this rolled combo of coconut cream, mint syrup, sweet lotus root, and spun sugar. “If you aren’t into bananas, other fruit fillings, such as a traditional apple pie, will work, too. Everyone likes a little something sweet at the end, and if you keep to the Japanese theme, it should be about fruit. It definitely isn’t going to be chocolate.”

Cook with the Chef
Chef Iverson Brownell of Iverson Catering will be leading a hands-on Asian Inspiration class at Charleston Cooks! Participants will learn how to prepare the artistic dishes that appear on the menu in the magazine’s May 2009 In Good Taste (“Orient Express,” page 112). Charleston Cooks! 194 East Bay St. May 27, Wednesday, 6:30 p.m. $60. (843) 722-1212, www.mavericksouthernkitchens.com/cooks

Salad of Local Greens with Kohlrabi