How to Make Pistachio Pesto

Bold, nutty pesto sauce pops on a springtime plate—you can spread it on pizza, toss it with pasta, or spin it as a savory dip for bread. At EVO, chef Blake McCormick replaces traditional pine nuts with pistachios for an extra-green twist on the condiment 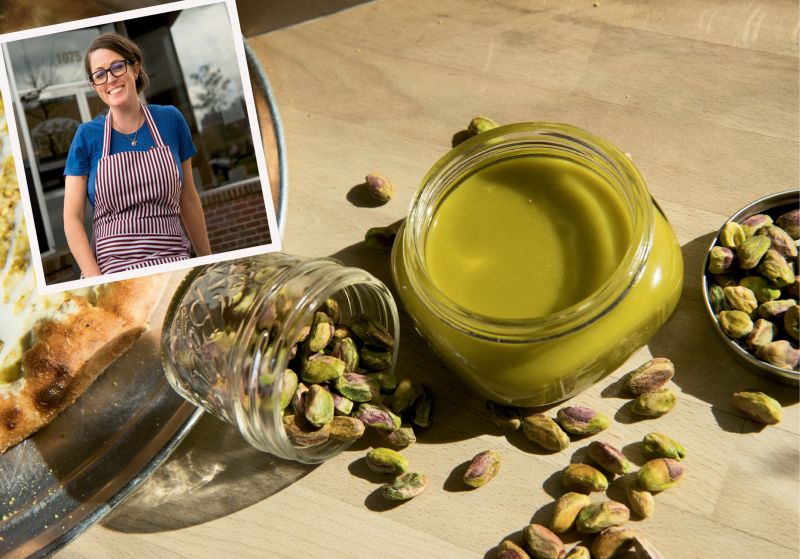 Spread out pistachios on a sheet pan and bake in the oven for nine to 11 minutes, until the nuts are brown and crispy.

In a food processor or blender on medium speed, add the extra-virgin olive oil and slowly incorporate the pistachios.

Blend until everything is combined, smooth, and consistent.

Add salt to taste and serve.

Make your own Pesto-Pistachio Pizza:

Want to recreate EVO’s delicious pie at home? Starting with a base of fresh pizza dough (you can either make it from scratch or purchase it from the refrigerated aisle of the grocery store), top the rolled-out crust with pistachio pesto and mozzarella. Next, spread on soft goat cheese: McCormick uses fromage blanc, a creamy cheese sourced from Split Creek Farm in Anderson, South Carolina. Cook the pizza according to the dough instructions. Once the pie’s out of the oven, dollop on crème fraiche (do not substitute sour cream, as it may curdle on the hot crust). For the final touch, dust the pizza with ground pistachios.

- Story behind the sauce: EVO co-owners Matt McIntosh and Ricky Hacker, who originally met in the kitchen of FIG, developed pistachio pesto when they opened their restaurant in 2007. “People loved the sauce, so the pizza became a menu staple,” McCormick says.

- For easy use: “Pour the pistachio-pesto mixture into a squirt bottle,” instructs McCormick. This way, you can evenly distribute the sauce over your dish.

- Storing tips: McCormick advises storing any unused pesto in the refrigerator, where it will keep for up to two weeks. You can also freeze the sauce and thaw it when ready to use.

- Beyond pizza: While the sauce shines on slices, EVO’s pesto can add nutty-sweet flavor to many dishes. Serve it as an appetizer with crusty baguettes for a fresh twist on bread and oil. It also makes a yummy sauce for pasta, a dressing for greens, or a spread for fish.

McCormick is originally from Massachusetts, but she’s no stranger to the South. She graduated with a marketing and advertising degree from Spring Hill College in Mobile, Alabama, and then swapped port cities to attend culinary school at the Art Institute of Charleston. While taking classes, she worked her first kitchen job at EVO, and took the reins as head chef in 2012.