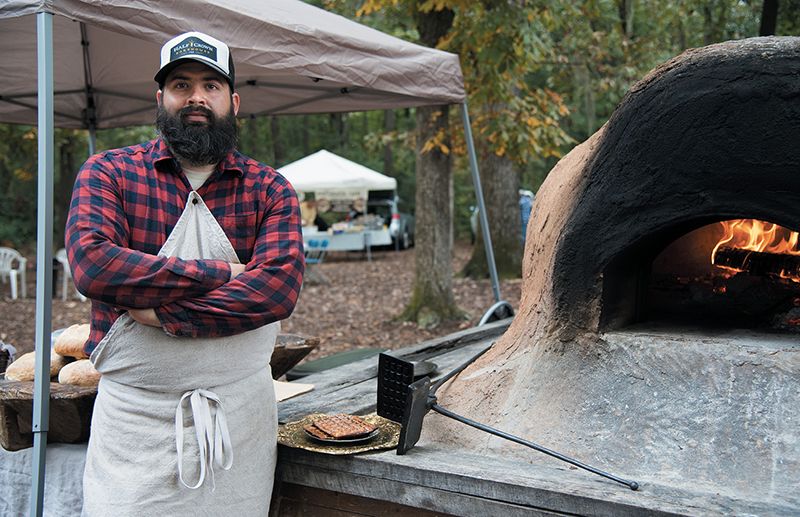 Justin Cherry of Half Crown Bakehouse built a period-correct 18th-century clay oven to make dishes, such as rice waffles with his 270-year-old waffle iron.

In mid-19th-century Charleston, every household of means had a waffle iron in its kitchen. A sine qua non of breakfast at a boarding house or hospitable home, waffles were served with bacon and cornbread in a kind of trinity.

Waffle irons were made from two round or rectangular plates of cast iron—sometimes embossed with a design, sometimes simply indented—at the end of long hinged handles. The plates were used for hearthside cooking over embers. Once greased with bacon fat, batter was poured in and the plates closed and extended over the coals. The iron was flipped once. After a modest period of time, it was removed from the heat and popped open, and the crispy waffles were anointed with butter, cane syrup, sorghum, or preserves.

Until 1880, a Lowcountry waffle had to have rice, either boiled or in the form of flour, as a component. The most refined homes served waffles with a crème de riz base, into which one added milk, rice flour, some water, and salt. Others combined boiled rice and rice flour with milk and eggs. Sarah Rutledge in The Carolina Housewife offered a recipe that used day-old hominy grits as a base, adding some wheat and a larger measure of rice flour to make a paste one spread onto the iron.

In the 1880s Charleston hotels stopped offering waffles in bread baskets and on breakfast plates, likely because of the promotion of wheat flour by Johann Christian Heinrich Claussen, who opened a local bakery in 1842. A generation of public diners went without until Jack Bischoff, an ambitious young restaurateur from a family that ran saloons in the 19th century, revived them. Bischoff championed a Lowcountry version of German cuisine. He opened two eateries simultaneously in autumn 1912—The Hanover at 233 Meeting Street and The German Restaurant at 67 Hasell.

The latter was surely the most unusual German spot in the area, offering roasted raccoon and sweet potatoes, deviled crabs, shad roe, and shrimp salad à la creole along with wiener schnitzel, liver sausages, and real rye bread. But its greatest claim to fame was reintroducing the waffle. In Bischoff’s hands, the crisp cake was slathered in butter and maple syrup and brought back to starring status on the bill of fare. The waffles he popularized remained a staple of Charleston menus thereafter, albeit using wheat flour rather than rice.

Today, however, the rice waffle is making a comeback. Last year, former Husk sous chef Justin Cherry built a mobile reproduction of an 18th-century clay oven in order to bake in period-correct fashion. The historical reenactor travels toliving history events along the East Coast serving recipes which, naturally, include rice waffles. Try them at the Saturday John’s Island Farmers Market when Cherry is in town. 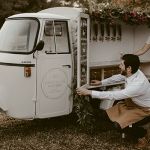 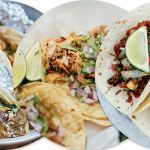 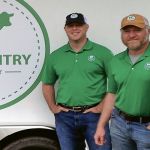