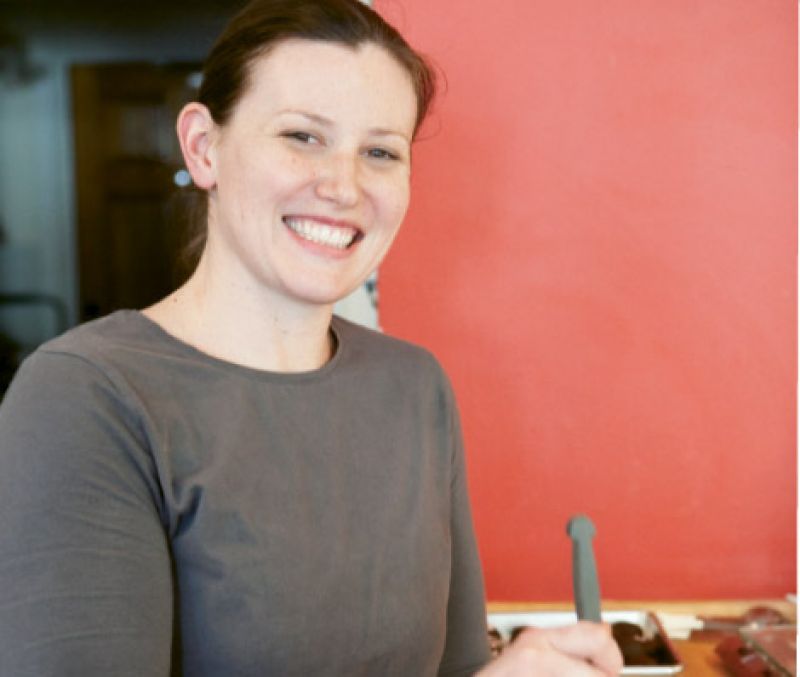 Looking to whip up some melt-in-your-mouth Valentine’s Day confections? Lauren Mitterer, owner of WildFlour Pastry on Spring Street, has the perfect idea: truffles. “Made from a simple ganache recipe, they’re pretty and delicious enough to impress, and you can personalize them with all kinds of coatings,” she says.

When it comes to sweets, Mitterer knows her stuff. This graduate of the Culinary Institute of America’s pastry program honed her skills in Vail, New York City, and Seattle restaurants before moving to the Lowcountry in 2004. She’d been lured to town with a pastry chef position at Red Drum that ultimately earned her a James Beard Award nomination in 2008. Last September, she opened WildFlour.

“I’ve made ganache everywhere I’ve worked, because there are so many applications for it—aside from truffles, you can use it to frost brownies, layer inside cakes, and fill tarts,” explains Mitterer.

As for what kind of cocoa to use for these decadent treats? “Truffles are only as good as the chocolate they’re made with, so I suggest higher-end brands like Scharffen Berger and Valrhona,” she says. After you’ve shaped the ganache into balls, you can roll them in your choice of coatings. “Cinnamon, cocoa powder or nibs, powdered or colored sugar, coconut, and ground nuts all work well,” notes Mitterer. “Get creative!”

• While Mitterer recommends spending extra on a higher-end chocolate such as Scharffen Berger or Valrhona (both available at Whole Foods and some local grocery stores), Ghirardelli dark chocolate is her favorite among the less expensive brands.

• Make sure the bowl you place the chocolate in is completely dry, as even a small amount of water can cause chocolate to “seize,” becoming grainy, hard, and virtually unusable.

• If chunks of chocolate remain after you’ve stirred the cream and corn syrup into it, place the bowl containing the mixture over a pot of boiling water (forming a sort of double boiler) to finish the melting process.

• Mitterer uses a two-teaspoon ice-cream scoop to portion ganache into truffles, “but specialty shops carry a variety of sizes that you can experiment with,” she says. “A melon baller will work too, although it doesn’t have the arm that pushes the scoops out neatly.”

• If you’re giving truffles as a gift, Mitterer recommends visiting a craft store to scout out fun packaging. “You can place the treats inside candy cups and then arrange them in a gift box or in a flat, shallow tin that you then wrap in cellophane.”

• If you want to infuse a flavor into your ganache, do so before boiling the cream with the corn syrup. “Try orange peel, mint leaves, cinnamon sticks, jalapeno, or vanilla bean,” says Mitterer. Place the flavoring and cream in a saucepan and bring it to a boil over medium-high heat. Once boiling, remove pan from the heat. Cover, letting the flavors meld for about 20 minutes. Remove flavoring, bring cream to a boil with corn syrup, and continue with the directions.

• Be sure to keep truffles refrigerated until you’re ready to enjoy.