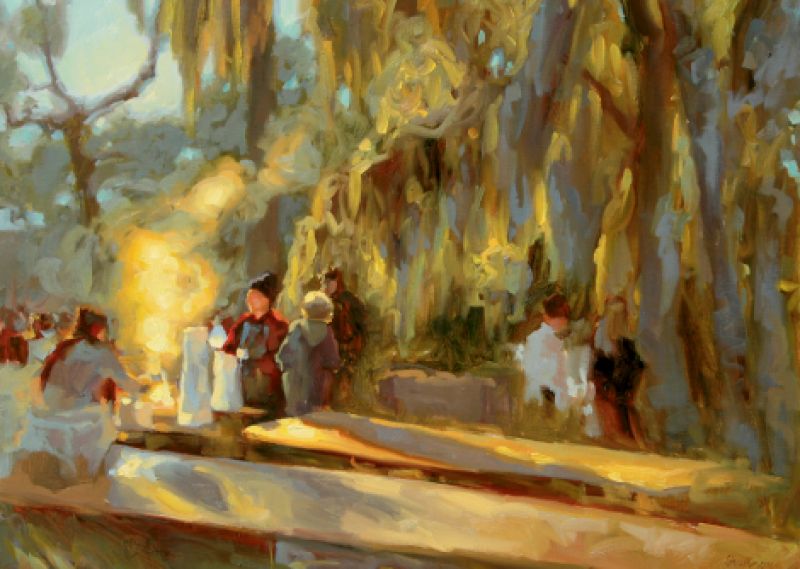 There’s one thing that Shannon Smith covets as much as the chance to dine at Oak, McCrady’s, 39 Rue de Jean, and Grill 225: the chance to paint them. “I love seeing the chefs in their coats and noticing the way the light bounces off the white fabric,” says the oil painter. “I worked as a waitress when I first started painting professionally in 1996,” she continues, “so I feel a connection to and an appreciation for what chefs and servers do behind the scenes for quality food and wine.”

But it’s not just culinary arts that attract this Charleston native, daughter of painter Betty Anglin Smith, who co-owns Smith-Killian Fine Art, where Shannon and her triplet siblings, painter Jennifer Smith Rogers and photographer Tripp Smith, all show their work. She also loves to paint Lowcountry scenes, capturing “moments in time” such as the Oyster Festival at Boone Hall. “Oyster roasts are one of the many perks of life in Charleston,” says Smith. “As a seeker of light, I am drawn to the way sunlight filters through Spanish moss and clouds of steam. I want to stimulate the viewer to feel, smell, taste, hear, and visualize the moment.”

The same goal applies to pieces she paints en plein air during her travels to countries such as Italy, Germany, France, and Mexico. “When painting outside, you have to work small because the light is changing so fast. I prefer painting big, so when I’m at home, I tend to be in my studio,” she explains.

These studio works often include still lifes. “My neighbor is the owner/farmer of Hudson Family Farm in Rowesville, and he delivers fresh vegetables to me once a week. I use whatever is in the box to set up still life scenes,” Smith says. The produce is a perfect accompaniment to the collection of copper, pewter, and ceramic vases that she incorporates to accentuate the light as it bounces off the various textures.

“Shannon’s works are at once realism and impressionism,” says collector Michael Luttig. “They are captivatingly alive with movement, emotion, and color. She captures light in all of its manifestations, places, and times as exquisitely as if it were being perceived by the eye and savored by the mind.” And he’s far from the only one coveting Smith’s lushly colored works. Exhibited at Smith-Killian Fine Art as well as the Wells Gallery at The Sanctuary at Kiawah Island, they’re included in private and corporate collections—including those of McCrady’s, Piggly Wiggly, Hospice of Charleston, and Clemson University—around the country.

From Charleston restaurant scenes to farm-fresh vegetables and foreign landscapes, “there’s always something to paint,” says Smith. “No matter what it is, I want the viewer to feel as if they are there in the scene, feeling what I did when I painted it.”