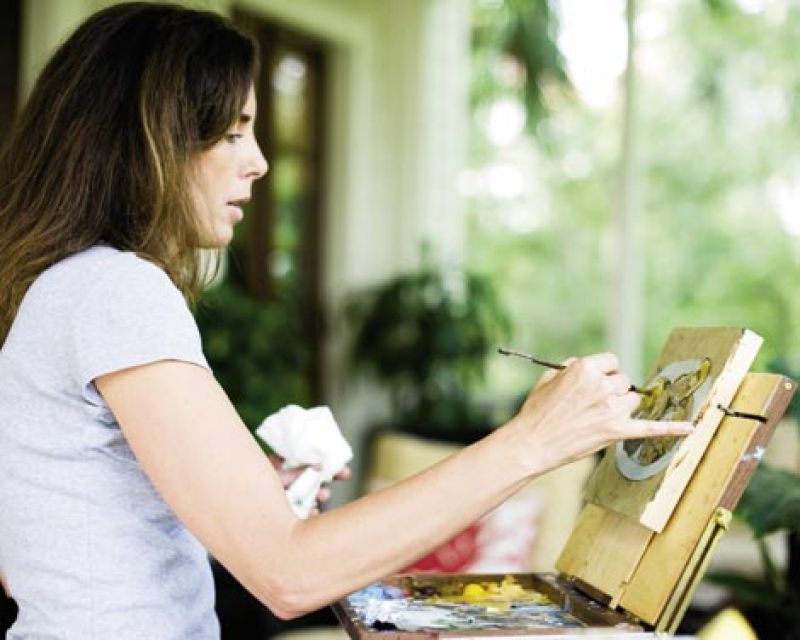 il painter Shannon Runquist has an eye for salvaged goods, swearing she inherited it from her antiques dealer grandmother. If it’s old and rusty or covered in chipped paint, she’ll snatch it up in the blink of an eye.

“I love rust, the patina on copper, anything that feels like it has a history,” she says while turning in her hands an aged copper strainer “borrowed” from a friend’s house. “I like to paint things from the past. I suppose that in doing so, I preserve them for the future.”

Runquist is a Southern girl by birth and choice. Born in Savannah, she spent her childhood on St. Simons Island and in rural Georgia, where she flourished in the coastal setting and country lifestyle. She studied landscape architecture and historic preservation at the University of Georgia, but her first passion was always drawing.

“I was the kid that drew on the walls, even in the closet,” she says, so it’s natural that after college and a few years in the corporate world, she returned to that passion and started painting, too. In 1996, she moved to the Lowcountry and began working with nonproﬁts, painting murals and furniture on the side. More and more, she painted on boards and linen as well, gaining representation by Horton Hayes Fine Art seven years ago. Today, her work hangs in corporate collections (such as those of Balsam Mountain Preserve and Roper St. Francis Healthcare), as well as in private ones throughout the U.S. and overseas.

“I paint what I know,” Runquist notes. “Oil cans, old typewriters, wooden pulleys. I think of who they could have belonged to and how they were used before they were abandoned on a dusty shelf.” Not one to take her subjects too seriously, she often gives her pieces tongue-in-cheek titles—a painting of a telephone receiver dangling from its cord, for example, is dubbed Dropped Call, while a bowl of unshelled nuts is A Real Nut Job. “I like to create happy paintings that tell a story or offer something to reminisce about,” she explains.

And for Runquist, stories revolve around cuisine as often as they do relics of the past. “I love food—I think I’d be a chef if I wasn’t a painter,” says the artist, who depicts such treats as a strawberry shortcake, a banana split on the end of a pulley, and a bowl of fresh shrimp awaiting their fate. This month, she’ll have a chance to showcase her culinary tastes as Horton Hayes joins in the Charleston Fine Art Dealers’ Association’s (CFADA) Palette & Palate Stroll on July 13. “I did a series called ‘Bite-Sized Paintings’ that includes pieces inspired by family recipes and idioms,” notes Runquist. Sounds like the perfect way to pair her passions for food and history.

You can view more of her work at shannonrunquist.com.