Resort by the Sea

Resort by the Sea
June 2012
WRITER:
Stratton Lawrence
Isle of Palms’ wide beaches draw a crowd at all hours 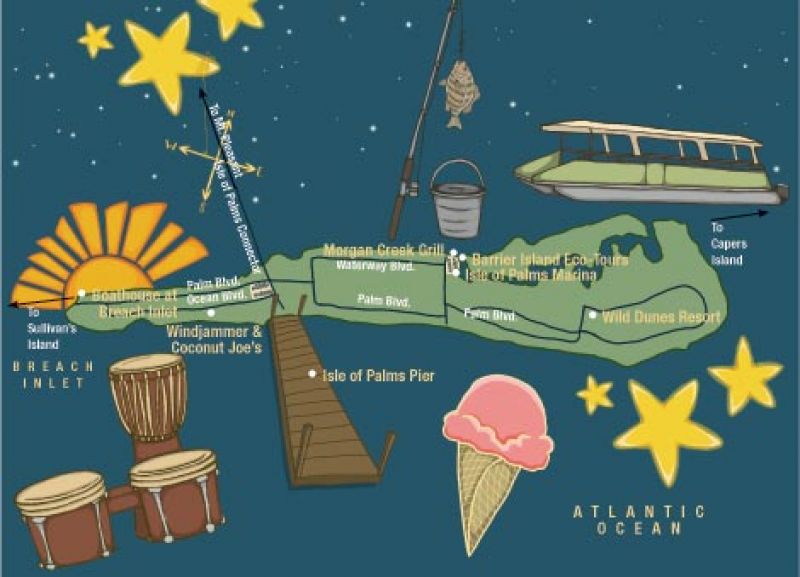 Harboring a cast of hotels, restaurants, and tourist attractions for more than a century (few remain who recall the days of the Ferris wheel), Isle of Palms’ very formation lies in its draw as a vacation spot. In the late 19th-century, a Beaufort doctor—and president of the Charleston and Seashore Railroad Company—bought the island and established streetcar lines from Mount Pleasant. By 1906, a 50-room hotel was built, dance and amusement pavilions followed, and IOP became an East Coast hot spot.

That legacy continues today as the island hosts a luxury resort community (Wild Dunes); a busy marina; and Charleston’s only beachfront clubs and music venues, including the legendary Windjammer. Front Beach is still the hub for nightlife. Low tide on the IOP reveals the area’s widest beaches, perfect for a moonlit stroll. And situated at the far northern reach of the city before almost 60 miles of protected coast, it’s also the area’s best jumping off point for boaters seeking pure coastal isolation and clear night skies.

Sing Along to Your Favorite Band
Could there be more of a dream venue than the Windjammer? For 40 years, the music venue/bar/restaurant has entertained patrons right on the beach. Supporting both local bands and major national acts, the full-size stage inspires fierce loyalty from the out-of-town bands that play there, taken aback by the fact that they’re literally performing atop the sand dunes. More than a few folks head home with wet clothes


Reggae at Coconut Joe’s
While neighboring Coconut Joe’s can’t boast the same caliber of national touring acts, they do have local singer-songwriters performing every night at 6 p.m. Thursday is the weekly highlight, when Mystic Vibrations plays its “Reggae on the Roof” gig and regulars and tourists alike come out to skank it up to the island vibes.

Get Elevated at Breach Inlet
The Crow Bar—the tiny rooftop bar and deck of The Boathouse, perched high above Breach Inlet—provides a bird’s-eye view that’s perfect for an end-of-day, pre-dinner beverage. “We responsibly pluck and gather from the soil and sea daily,” claims the restaurant, and there’s arguably no finer place to suck back a few oysters or savor a clam or two from local supplier Toby of Tobias Seafood. Breach Inlet’s treacherous currents slip by below as the day fades away and the stars begin to flitter in the sky.

Camp Out on Caper’s Island
Just north of Isle of Palms and neighboring Dewees, you’ll find a close-to-home escape from it all at Caper’s Island. The preserve is home to alligators, deer, bald eagles, and myriad wildlife (including mosquitoes), and is just a short boat ride from the Isle of Palms Marina. Permits are required to camp (they’re free), and despite the fact that up to 80 a night can be issued, you’ll likely have the island to yourself after dark. If the moon is out, head up the beach to the “boneyard”—a wild area of dead trees overtaken by the surf, their preserved wooden skeletons now emerging from the sand. If you don’t have your own boat, the trip over is only about an hour in a kayak, or hire a round trip ride from the marina. However you get there, you’ll be rewarded with the darkest night sky in proximity to the city.

Chill On the Water at Morgan Creek Grill
With live music, solid seafood, and a spot right on its namesake waterway just past the IOP Marina, this island standout rivals just about anywhere in the Lowcountry for a happy hour with a sunset view.

Gaze Out at the Heavens
Beaches are a popular place for contemplating the vastness of the universe, and Isle of Palms offers the area’s best site accessible by foot. Head all the way to the island’s northern edge (you’ll have to park at the last entrance to Wild Dunes resort and meander down the beach for the final half mile) and you’ll witness a night sky relatively free of light pollution. North of here are miles and miles of wilderness, the Francis Marion National Forest protecting the inland coast from star-obstructing light. Bring a blanket and your binoculars, and don’t forget to brush up on your constellations if you’re taking a date.

Angle Into the Darkest Depths
Few people take the boat captains at the Isle of Palms Marina up on their offer of custom night-fishing tours, but they’re there for the taking. Although most frown on gigging (using a spotlight and a spear to catch flounder at night), they’ll gladly take you out after dark in search of red drum and sheepshead. Private docks with lights are like fish beacons in the dark, and while fishing with a licensed skipper, you’re less likely to feel like an intruder casting under them after hours.

Kick Back with the Locals at ACME Cantina
Although this old-school bar reinvented itself as a gourmet bistro about a year ago, it’s still the same old-school crowd after dark, relaxing and sharing fishing stories on the cozy outside deck.

Barrier Island Eco-Tours Sunset Cruise
If you’re not the camping type, you can still enjoy the day’s end on Caper’s Island. Based at the Isle of Palms Marina, Barrier Island Eco-tours offers their Dolphin Discovery Sunset Cruise three times a week, including an hour onshore at Caper’s. Led by knowledgeable naturalists, the tours are among the most affordable ways to get on the water (and get into the wild) around Charleston.