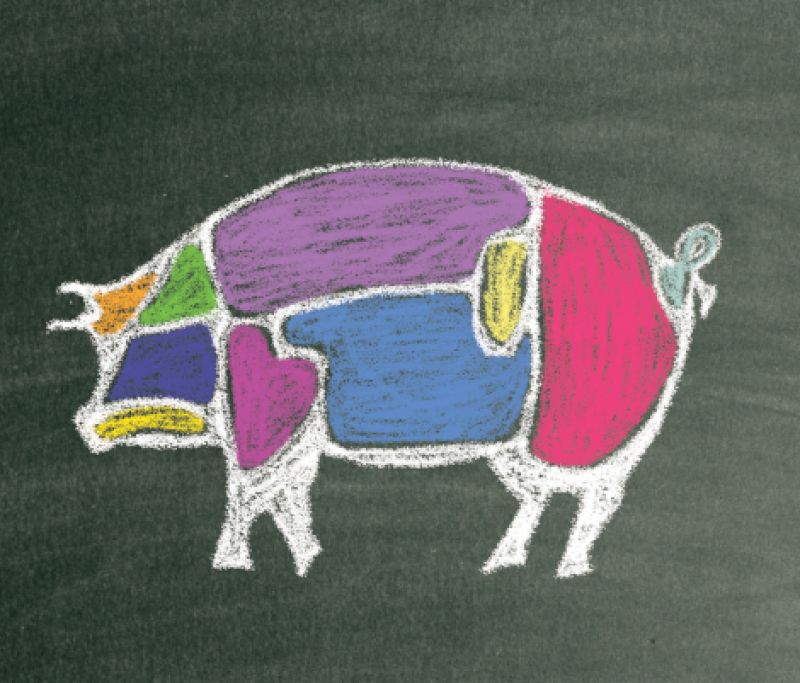 HUSK
Pig Ears
You may be more familiar with the variety you pick up at Petco, but pig ears are a delicacy for people as much as pooches, especially at Husk, where they’ve become a cult classic. Try them wrapped in lettuce with charred scallion barbecue glaze, toasted peanuts, and shaved apple.
76 Queen St.

CYPRESS
Pâté
Chef Craig Deihl crafts his pork pâté from heritage breed pigs whose fat provides more flavor. “Our pâté is super fatty and heavy on the liver. Lots of cream, eggs, red wine, and fresh bread mellow it out. I’ve been making the same recipe for years,” he says.
167 East Bay St.

FIG
Porchetta di Testa
Porchetta di Testa is the Italian name for a pig’s head. “This technique-driven approach is meant to elevate a lesser valued part of the pig through a series of butchery, brining, stuffing, rolling, poaching, trussing, and portioning,” says chef Mike Lata. “We like to put our signature on traditional garnishes like sauce gribiche, giardiniera, and marinated peppers that pair nicely with the unctuous pig head.”
232 Meeting St.

TWO BOROUGHS LARDER
Fried Pig Tails & Scrapple
While this Coming Street spot has been known to put fried pig tails on the menu, one weird bit you can always find is their staple scrapple, available for lunch or to-go. A treat courtesy of the Pennsylvania Dutch, scrapple is essentially hog mush and may feature a smattering of any one of the following: skin, heart, liver, tongue, and brains. Yum.
186 Coming St.