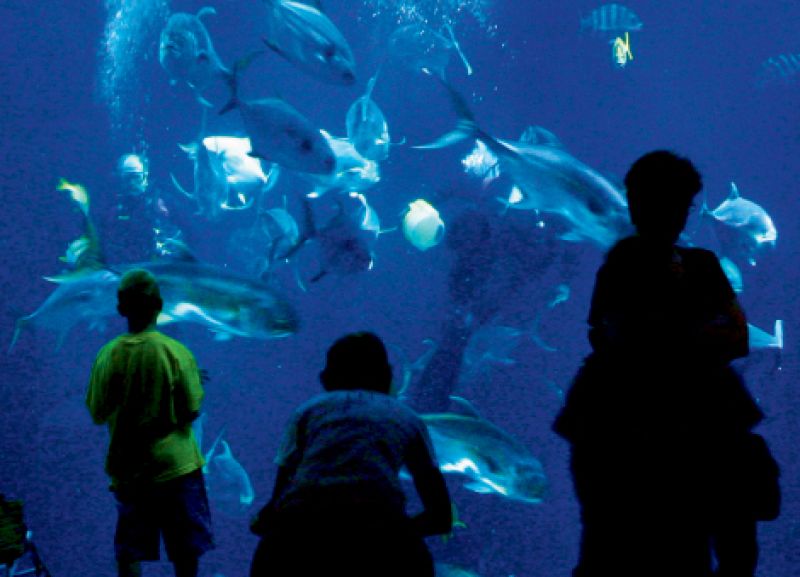 The stark white alligator floats still as a statue, unconcerned by the relentless barrage of flashbulbs lighting up his swampy sanctuary. Visitors gaze in wonder as the reptile finally breaks his pose, sending a giant blue catfish zipping away.

New exhibits of animals like the albino alligator and Magellanic penguins have helped the South Carolina Aquarium swim into the fiscal black, attracting more visitors in 2009 than it has averaged over the last five years. At a time when many would expect such attractions to be faltering due to a poor economy, the South Carolina Aquarium is celebrating its 10-year anniversary and recently announced that its $12 million start-up debt has been paid off.

That bodes well for Charleston’s marine life, both inside the facility’s tanks and in our rivers, estuaries, and ocean. Although the aquarium’s physical location is a laud-worthy gem in our state, the building is simply a visible showpiece of the nonprofit’s greater outreach. Built atop once-polluted land that housed an oil gasification plant, the aquarium’s conservation success story began in its origins. Since 2000, the staff has rehabilitated and released 51 sea turtles from the on-site hospital, a facility that’s grown from a kiddie pool to a sophisticated series of tanks in the bowels of the building. Likewise, the aquarium’s Sustainable Seafood Initiative claims more than 80 participating restaurants, allowing consumers to choose dining places where they can enjoy the ocean’s bounty guilt-free. Ahead of the curve on the green movement as well, the operation’s extensive recycling and water conservation programs ensure that it practices the principles it teaches.

“Taking the aquarium beyond its boundaries and extending our message to the community ultimately helps our mission,” says Kevin Mills, president and chief executive since 2006. “We strive to not only serve our visitors well, but to engage in our full conservation potential. Being out of debt gives us the opportunity to secure those programs.”

The impact of aquarium employees and volunteers extends across the state. Staff veterinarian Dr. Shane Boylan recently traveled to the Gulf Coast to care for oil-impacted wildlife, and on-site staff frequently traverse South Carolina to monitor the wild populations of species on display at the aquarium. Students even got to experience the penguins first-hand last year, as the birds made frequent stops at underprivileged schools unable to visit on field trips.

To enhance the visitor experience in 2010, the aquarium recently opened a 4-D theater—when a whale jumps from the screen, viewers feel the water fly off his skin; when penguins come waddling by, it snows. It’s just one more way that visitors will be impacted, hopefully absorbing and taking home the aquarium’s conservation-driven message.

“It’s easy to remain locked in our human world, but we share it with so many remarkable species that depend upon us,” says Mills. “We need to always keep in mind the wildlife and wild places that are just beyond our fingertips, just out of view, when we make decisions, because every decision has a ripple effect.”