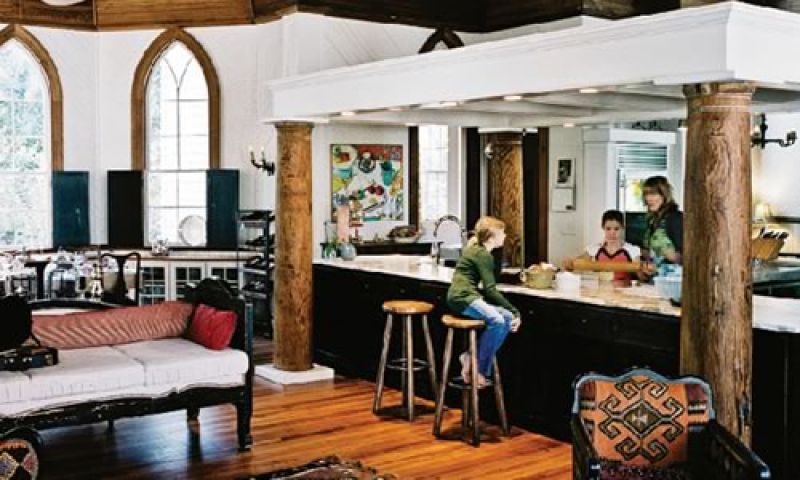 Sometimes the stars align and the universe shouts out clear as day, and there’s no choice but to oblige.

“Amen” is what church folk say when that happens, and “amen” it was—maybe even “Hallelujah!”—the day Melissa Clegg and Todd Frizzelle drove by the quaint old church on the quaintest corner of Mount Pleasant’s Old Village one last time. They were packed up and headed out of town—about to embark on a dreamy yearlong Italian sojourn—and were exhausted from house hunting for a place to come home to post-European odyssey.

“We were looking to buy, if we found the right project,” says Melissa, a Mount Pleasant mom and Jane-of-all trades (photographer, flight instructor, culinary whiz) who knows a thing or two about real estate projects. An accomplished restaurateur, ­Melissa has an impressive track record of transforming old homes and bland warehouses into splashy, award-winning restaurants in her hometown of Athens, Georgia. In fact, she and Todd and their two girls, Grayson and Mozie, were returning to Charleston (via Tuscany) after a two-year Athens interlude to oversee business at the acclaimed Five and Ten and The Last Resort. “We’d just about given up when we decided to swing by (the church) one last time, just as the ‘for sale’ sign was going up,” Melissa recalls. They made an offer on the spot.

Call it providence or maybe just ­patience. Melissa and Todd had been eyeing the church for years, since first moving to Mount Pleasant from Athens in 1996. Actually, who hadn’t been eyeing the church? If there’s a quintessential postcard pic of Old Village charm, it’s this sweet little Gothic Revival church embraced by lovely oaks, with its white shingles, tin roof, cozy porch, and small, perky steeple.

The sanctuary is actually the second church building to occupy this corner lot that Major James Hibben donated to the Methodist Society in 1809. The “old, old Hibben” Methodist church, built in 1830, served as a Confederate hospital and was demolished in 1868. By 1899, the congregation had raised enough money and ­materials to begin new construction. According to church lore, a boatbuilder parishioner was one of the lead craftsmen, hence the finely honed tongue-in-groove heart pine that gracefully curves along the church’s interior walls and soaring arched ceiling.

When Hibben United Methodist outgrew the small sanctuary and moved to their present Coleman Boulevard location in 1959, they sold the church and an adjacent cinder block education building to the Seventh-day Adventists. In 2000, the dwindling congregation put the building on the market, and Todd and ­Melissa took a ­serious look, bringing in building inspectors and architects. But the timing wasn’t ideal. “The girls were babies, and we had just finished a major renovation of our house on Bank Street,” notes Melissa. Ultimately the church made it easy—the members ­decided they weren’t ready to sell. But by the summer of 2005, the timing couldn’t have been better. The Adventists needed to sell, the Clegg-­Frizzelles were ready to return to Mount Pleasant, and the congregation liked the idea of a nice young family making the church their home. The fact that Todd happened to be a boatbuilder sealed the deal, a serendipitous sign from above.

During their intervening year in Italy, where Grayson, now 12, and Mozie, 11, ­attended an Italian school (their classroom was a bell tower overlooking Chianti, “school lunch” was a four-course meal) and Melissa studied at Cordon Bleu, the couple faxed renovation ideas and drawings back and forth to their architect, Linda Balzac. “The challenge was to break up this huge open space without building walls. We wanted it to be soaring and personal at the same time,” says Balzac, who specializes in nontraditional renovations and has an intuitive knack for creating intimate, workable spaces. “We wanted to retain the integrity of the historic structure as much as possible but still make it livable,” adds Todd, who did most of the construction work himself. “Houses are about straight lines and making things plumb and level. There are a lot of curves in this old church—there’s not much that’s plumb and level.”

The solution: the nave would serve as the main family living space, with the apse and chancel becoming a centerpiece kitchen; strategic placement of built-in bookshelves created a cozy library nook with a fireplace in the back of the building. Almost nothing else changed. The rope pull for the church bell still dangles by the front door, two large stained glass windows (added by the Adventists in the 1970s) distill sunlight into a jeweled glow, and all the original heart pine tongue-in-groove siding remains (pieces removed during the library construction were reused in a powder room by the kitchen). “The original parishioners obviously put a lot of love into building this church,” notes Melissa. “We wanted to honor that.”

An arbor anchored by four gigantic old heart pine columns that Melissa reclaimed from a builder’s warehouse help define the kitchen area and downplay the ­ceiling height, creating a more intimate scale without closing anything in. “Things revolve around the kitchen for us,” says Melissa, who fell for the restaurant scene at age 12, ­working as a dishwasher at a joint called Sparky’s. “I love that this kitchen allows multiple family members to be cooking and contributing in their own way without running into each other. It has a nice balance—it’s a nice family space.” One of the church pews serves as seating for the kitchen table, a favorite homework spot for the girls.

But there was still the issue of the sad, squatty back building that once housed classrooms and a church kitchen. “Actually, it was that eyesore that turned out to be the bonus that made the whole project work,” Melissa says. Connecting the two buildings through a church window (restoring symmetry lost when the identical window on the other side became a door to the pastor’s study in the 1940s) allowed for a second story addition onto the former cinder block shoebox. It was a win-win for everyone: the family got a charming bedroom wing complete with a street-side porch; the neighbors got a more pleasing view; and Melissa and Todd got bonus space for their creative endeavors. A ground floor garage/workshop gives Todd room for ­refurbishing vintage motorcycles and boat crafting, and Melissa transformed the tired old church kitchen into an inviting guest suite and bright airy space for one of her dreams—a culinary workshop.

This commercial-grade kitchen in the back of the main house will be where ­Melissa serves up Supper, the name of her cooking school officially opening in Jan­uary. Handsome French doors painted a glossy black and an antique harvest table (both brought back from Europe) add old-world flavor to the workshop room, ­designed for sharing her gustatory passion with students. “My favorite classes have always been both demonstration and participation,” says Melissa. “I like that this is a intimate, inviting space, perfect for small groups”

“When we first saw the church and the outbuilding, I realized this had the potential for a nice living space and an ­opportunity to step back into creative and culinary projects,” says Melissa, who sold two of her restaurants last year and now enjoys a quieter, more balanced life, savoring the sanctuary of home. “But the biggest surprise is how wonderfully it works as a family home. We really live in every space—there’s not a corner we don’t use.” Grayson, a musician, and Dad can be found jamming on the front porch or in the ­living room, while Mozie, the resident artist, ­enjoys drawing in the den, and ­everyone lounges in the living area when not ­indulging in their various creative pursuits. “It’s comfortable; it really feels like home,” Melissa adds. Well “Amen” and ­“Hallelujah” to that, because that’s ideally how church should feel.