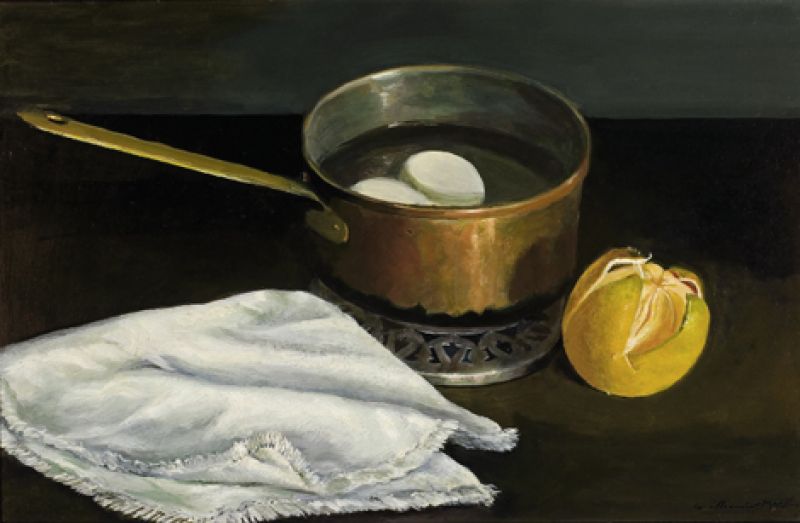 The pursuit of the great American landscape has led painter William McCullough on a 46-year journey from his boyhood home in Kingstree through New York and Connecticut, across Appalachia, into downtown Charleston, and then—in 2003—back to that Carolina family farm. His collected works are a timeline of his life, showing the people, places, and objects of his every day. Calling himself an “intimist,” McCullough says he paints “things I know very well.” Things like the corner of a porch, a saddle beside a galvanized bucket, and a doorway into a cluttered study. “The best paintings are of subjects not ordinarily seen as glorious,” he says.

One of his favorite pieces, The Screen Door, shows exactly that, with a calendar on the kitchen wall depicting an impressionist landscape that mirrors the dappled sunlight seen through the doorway. “The puppy bowl on the floor, the newspaper, everything describes something about that place that I thought was important,” says McCullough. “That place” was the kitchen of his house on Rutledge Avenue, which he painstakingly restored, depicting it in some 50 works over the 12 years he lived there (sadly, an arsonist burned it to the ground last year).

McCullough has earned renown for his modern realist paintings of interiors, still lifes, figures, and landscapes. They hang in Charleston bastions like the Cassique clubhouse at Kiawah Island and Roper St. Francis Hospital, and at The Greenville County Museum of Art, the Gibbes Museum of Art, and New Orleans’ Ogden Museum of Southern Art.

In 2006, the artist’s daughter, Currie, curated a retrospective exhibition of his work at the City Gallery at Waterfront Park, showing 120 pieces painted over some 30 years. Coinciding was the History Press tome William McCullough, Southern Painter, in Conversation with William Baldwin, Southern Writer, compiled from days of talks between the longtime friends.

McCullough explains that he is influenced by realist painters John Koch, Daniel Greene, and Robert Brackman—all of whom he studied under at The Art Students League and National Academy of Design in New York. He also nods to 19th-century French painter Corot for ushering in a modern landscape perspective and for including imperfections such as tree stumps and messy wood piles.

McCullough takes this approach to American scenes, painting pieces that truly say something about a place and its people. For example, notes collector Stan Langston, “I have a painting he did of a ballet dancer. Her feet tell the story—I bought it for the foot, the realism of the floor with its oak grains, and the wear on the chair leg. He is absolutely factual in his observations. I just sit and stare at it.”

While McCullough also owns a home in southern France, where he paints annually, “After a month or two, I can’t wait to get back to Kingstree,” he says. There, he continues his intimate works, with the simple explanation that for him, “familiarity breeds enthusiasm and interest.”