A Grand Tour
January 2011
WRITER:
Stephanie Hunt
This month at New York’s Park Avenue Armory, 70 pieces of Charleston’s past—from centuries-old furniture, paintings, and metalwork to delicate textiles and ceramics—will be in the spotlight at the Winter Antiques Show (WAS), the go-to trove for curators, collectors, scholars, and designers. More than 25,000 people are expected to experience “Grandeur Preserved: Masterworks Presented by Historic Charleston Foundation,” a carefully curated loan exhibition and collaborative effort among local museums, institutions, and private collectors. Get an insider’s look at some of the priceless objects heading north to demonstrate our city’s significant role in American decorative and fine arts, and meet three of the players who have helped bring it all together 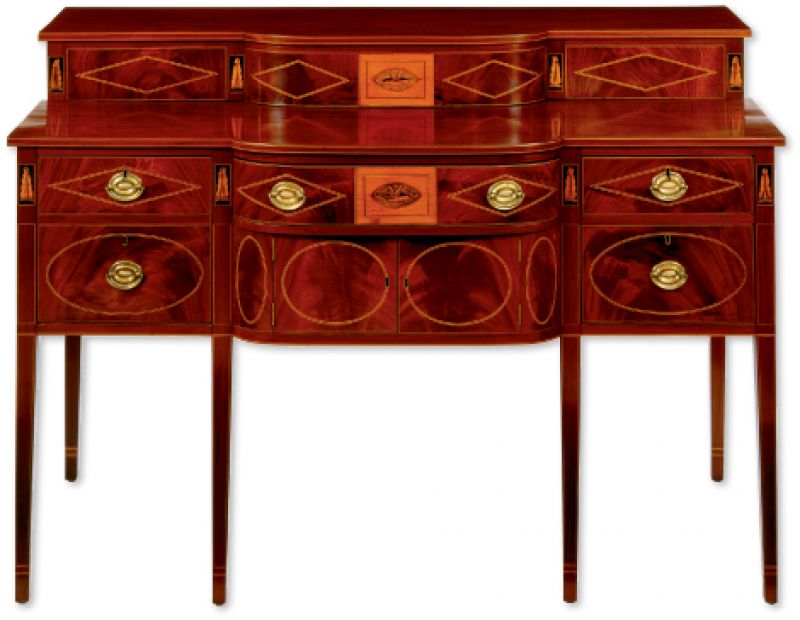 Provenance: Charleston’s Scottish workshops, inlay design is characteristic of cabinetmaker Robert Walker
Description: Mahogany and mahogany veneer with ash (drawer supports), tulip poplar (drawer bottoms), and white pine (secondary wood); 45 1/2 inches high, 66 3/4 inches wide, and 31 inches deep
Exhibition Notes: This “stage-top” sideboard from the Rivers Collection represents the work of local Scottish craftsmen and the direct transfer of style from across the Atlantic. It will be displayed along with a rare embroidery and a kettle stand, also from the Rivers Collection, helping to convey the importance of Charleston in the development of American decorative arts.

This is one of only four documented Charleston examples of a “stage-top” or double-tier sideboard; note that the top tier does not have a functional use beyond a place to display one’s silver plate, a visual sign of wealth.

Photograph courtesy of The Rivers Collection

Provenance: Charleston, made by silversmith Alexander Petrie (1717-1768)
Description: Silver; 9 inches in diameter
Exhibition Notes: On loan from St. Michael’s Episcopal Church, the Alms Basin is one of the most notable examples of Charleston’s 18th-century silver. Without precedent, this rare piece conveys the ingenuity and elegance coming from the shop of Alexander Petrie, whom recent scholars identify as one of the city’s most illustrious silversmiths. In the exhibition, it helps demonstrate the importance of enslaved Africans on the trades. As with many local artisans, Petrie owned slaves, who were skilled in the trade and likely assisted him in creating exquisite plate, which was sold to the area’s wealthiest citizens.

The Alms Basin was commissioned by the wealthy planter Henry Middleton (1717-1784) for St. George’s Parish in Dorchester. The undulating rim gives the illusion of a ribbon widely gathered  around the flat dedication panel, drawing attention to the engraving of the patron’s name in the center.

Provenance: Charleston, made by English potter John Bartlam (working, 1765-1783)
Description: Soft-paste porcelain
Exhibition Notes: When Bartlam selected Charleston as the site of his ceramics factory, English manufacturers, such as Josiah Wedgwood, took notice, as it was the first such venture in America. This teabowl (courtesy of Chipstone Foundation, Milwaukee, Wisconsin) is a recent discovery—as is Bartlam’s role in American porcelain manufacture. Previously, it was thought that the short-lived Philadelphia firm of Bonnin and Morris produced the first soft-paste porcelain in America. The bowl will be exhibited alongside three sherds (loaned by the SC Institute of Archaeology & Anthropology) that were excavated from Bartlam’s Cainhoy kiln site.

Provenance: Charleston
Description: Silk thread on woven linen ground, cross-stitch; 16 1/2 by 12 1/2 inches
Exhibition Notes: With green, blue, pink, and gold silk thread, eight-year-old Susan Stevens Kennedy stitched her name and date on this rare Charleston-made example of a schoolgirl’s art. A gift to Historic Charleston Foundation from Mrs. John Littlefield and Mrs. Frederick Deane, the entire sampler is surrounded by a “rosebud” border with the alphabet in cross-stitch. In the center is the ubiquitous Neoclassical motif, the eagle, which here is shown grasping a red, white, and blue shield in petit point.

Provenance: Charleston, painted during a visit by Swiss-born artist and naturalist Pierre Eugene Du Simitiere (1736-1784)
Description: Watercolor, pencil, and ink on laid paper; 8 3/8 by 12 1/2 inches
Exhibition Notes: This recently discovered watercolor from a private collection sheds new light on the original design and 18th-century appearance of Drayton Hall, North America’s earliest example of fully executed Anglo-Palladian architecture. The work captures the Palladian five-part plan, complete with flanker buildings to the north and south and ornamental colonnade walls connecting the three buildings. Today, the colonnades are gone, as are the flanker buildings, which were destroyed by a major earthquake and a hurricane in the last decade of the 19th century. Another important, but no longer existing, feature is the Doric entablature above the first floor of the double portico. —Carter C. Hudgins, Ph.D., Drayton Hall director of preservation

Provenance: South Carolina
Description: 23 3/16 inches
Exhibition Notes: Fanner baskets, such as this one from The Charleston Museum, were fashioned and used by slaves to separate the rice grain from its husk. The slaves, most from West Africa via the West Indies, brought their techniques and tools for rice cultivation, transforming the marshland of the Lowcountry into a thriving rice economy.

Photograph courtesy of the Charleston Museum

While some pieces remain in private family collections, the majority of the Ravenel service is on display at the Heyward-Washington House, an historic house museum owned and operated by The Charleston Museum.

Photographs courtesy of The Charleston Museum

Provenance: London, painted by British artist George Romney (1734-1802)
Description: Oil on canvas; 106 by 70 by 3 1/4 inches framed
Exhibition Notes: In 1786, while visiting England with her husband, Colonel Roger Smith, on their grand tour, Mary Rutledge Smith (b. 1747) sat for the famous English portraitist George Romney. She is seen here holding her son, Edward. The painting was exhibited throughout the 19th century, and it was publicly viewed for the last time at the Carolina Art Association in 1884 before it was sold at auction in England five years later. In 1976, the painting was again sent to auction and purchased on behalf of Historic Charleston Foundation. It now graces the stairwell of the Nathaniel Russell House at 51 Meeting Street.

Provenance: London, created by Abraham Portal (1728-1809)
Description: Silver; 4 inches high, 9 inches in diameter
Exhibition Notes: Part of the Historic Charleston Foundation collection, this silver punch bowl—noted as one of the first trophy forms—is engraved “Won by Trial, the Property of Will. Allston, Esqr. at NEWMARKET, 1768.” The Newmarket course referenced was a Charleston racetrack, and the English track of the same name was not established until a decade later. Better known as a dramatist and author than a silversmith, Portal, a Huguenot, was apprenticed to the famed Paul de Lamerie. Much of his work was outsourced to other London silversmiths for production, as he was more of a retailer. This is a handsome example of the bowl form with a detailed engraving that was possibly executed in Charleston.

Provenance: Assembled in Charleston with English case and works by William Lee (working, 1768-1803)
Description: Painted wood case; 17 3/4 inches high by 10 inches wide by 7 1/4 inches deep
Exhibition Notes: From the Historic Charleston Foundation collection, this rare clock was assembled by William Lee, who had apprenticed with Charleston watch- and clockmaker Joshua Lockwood. Bracket clocks were rare in their own time, and few of these clocks engraved with a Charleston watchmaker’s name are known.

Provenance: Paris, crafted by French watchmaker Jean Antoine Lépine (1720-1814)
Description: Gold, pearls, enamel, agate, and carnelian; 9 1/16 inches
Exhibition Notes: This truly one-of-kind “macaroni” chatelaine, from the collection at The Charleston Museum, is so named for the way it looped rather than fastened to a lady’s belt. Charlestonian Mary Hering Middleton commissioned the timepiece in Paris on behalf of her friend Mary Stead Pinckney, who wanted to purchase a watch for her 13-year-old niece, Eliza Izard Pinckney (1784-1862). Middleton visited the shop of Jean Antoine Lépine, watch- and clockmaker to French kings and aristocrats. After several alterations, the design was finally amenable to Middleton, as she wrote her friend in July of 1797 that “there was nothing newer or more fashionable to be had.”  —Bridget O’Brien, HCF museum coordinator

Photograph courtesy of The Charleston Museum

Provenance: Probably London, England or Leydon, The Netherlands, painted by English naturalist George Edwards (1694-1773)
Description: Watercolor and ink on laid paper; 10 1/2 by 8 13/16 inches; inscribed: “9”
Exhibition Notes: A collection of 48 Edwards watercolors were acquired by Charleston planter John Drayton in 1733. Such works, completed 10 years before the published etchings of the artist (known as the father of British ornithology), are the oldest of their type to survive in North America. In addition to their age and rarity, the watercolors are significant, as they demonstrate a close connection between Drayton and Edwards, linking Drayton to the European intellectual community of the 18th century. —Carter C. Hudgins Ph.D., Drayton Hall director of preservation

Provenance: Charleston, by American artist George Smith Cook (1819-1902)
Description: Ambrotype; 3 ¾ by 2 ¾ inches
Exhibition Notes: As a personal maid to Alicia Russell Middleton, and eventually her daughter Alicia Middleton, Lydia Middleton had a higher status that other enslaved persons in the household. When Alicia took a tour of England, France, Switzerland, and Italy with her children in 1835 and 1836, Lydia accompanied her mistress as a personal servant. Pictured here with Charlotte Middleton in an ambrotype on loan from the Gibbes Museum of Art/Carolina Art Association, Lydia served the Middleton family until the abolition of slavery at the end of the Civil War in 1864.

Can’t make it to New York?

• Visit us online at charlestonmag.com/WAS as entertaining style editor Mitchell Crosby blogs directly from the show, reporting on the people, the parties, and the amazing antiques.
• Save the date for Historic Charleston Foundation’s Charleston International Antiques Show
When: March 17-20, 2011
Where: 40 East Bay Street
Tickets: historiccharleston.org or (843) 722-3405