15 min with Melanie Durant
April 2015
WRITER:
Allston McCrady
PHOTOGRAPHER:
Caroline Tan
We caught up with the pastry chef, who turns out delicious sweets at FIG and The Ordinary, on her love of vintage desserts and why she’s raising her son by the sea


CM: What inspired you to become a pastry chef?
MD: It started early on. In high school, I was obsessed with the PBS show Great Chefs. They had a croque-en-bouche [a traditional French dessert made with pastry balls and caramel] in the intro credits, and I said, “I’m gonna do that!”

CM: After high school, did you go straight to pastry school?
MD: No, my dad was not having it. He wanted me to go to business school and make a million dollars. It wasn’t until my late twenties that I made the big decision to pursue my dream, pack my bags, and head to New York to attend the French Culinary Institute.

CM: Tell us about your whisk tattoo.
MD: The image is from a 1920s cookbook I got as a graduation gift. A local chef made fun of me for it. He saw it and said, “Oh no, not again!” It turns out all the chefs here have tattoos of sectioned pigs, and all the pastry chefs have whisks. I was like, “Dammit!”

CM: You had some sweet gigs working under James Beard semi-finalist Cynthia Wong in Atlanta, first at Cakes & Ale, then at Empire State South. What drew you to Charleston last spring?
MD: Cynthia got pregnant and moved to London. Then I got pregnant. I wanted my baby to grow up informed by a coastal upbringing like my husband had in Savannah.

CM: How did you land a job with FIG and The Ordinary?
MD: A friend told me they were looking for a pastry chef. We were vacationing here on Folly, and I went over to FIG in my beach gear. I cooked four desserts for them. I guess they were good, because I got the gig!

CM: What is your creative process?
MD: I’m inspired by the old-lady stuff. I like to take desserts that nobody thinks about anymore—desserts my great-grandmother would have loved—and bring them into the present.

CM: Can you give us an example?
MD: Recently, we did a dessert inspired by the Saint-Honoré cake, named for the French patron saint of bakers. It’s an old French dessert, a pâte-à-choux ring with caramelized puffs filled with pastry cream and just kind of dolled up in whipped cream. Very French, very stuffy—but so delicious!

CM: Which Lowcountry ingredients excite you the most?
MD: We get a lot of surprises. Someone dropped off Ambrose Family Farm strawberries after a recent freeze. Holy cow! I was really geeked out. We started playing with them and filled miniature tarts with buttermilk ice cream, strawberries, and caramel corn from Anson Mills.

CM: When you’re not whipping up pastries, how do you unwind?
MD: I love to wade in the tidal pools on Folly, searching for sand dollars and starfish with my son while my husband surfs. It’s eight minutes from our door to the beach. I have a fear of the ocean, maybe because as a kid, I got stung by a jellyfish and bitten by a crab. So I love the beach, but I don’t get into the water. I really hope my son doesn’t inherit that fear. I want him to be carefree. 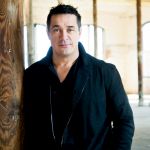