Benne Wafers
December 2016
WRITER:
Suzannah Smith Miles
Impossibly thin, subtly sweet, and crunchy with sesame seeds, the benne wafer is a time-honored staple of Charleston cuisine. This delectable edible hearkens back to Africa and to the blending of cultures that resulted from slavery and now defines the city’s unique culinary heritage. Read on for more of the story 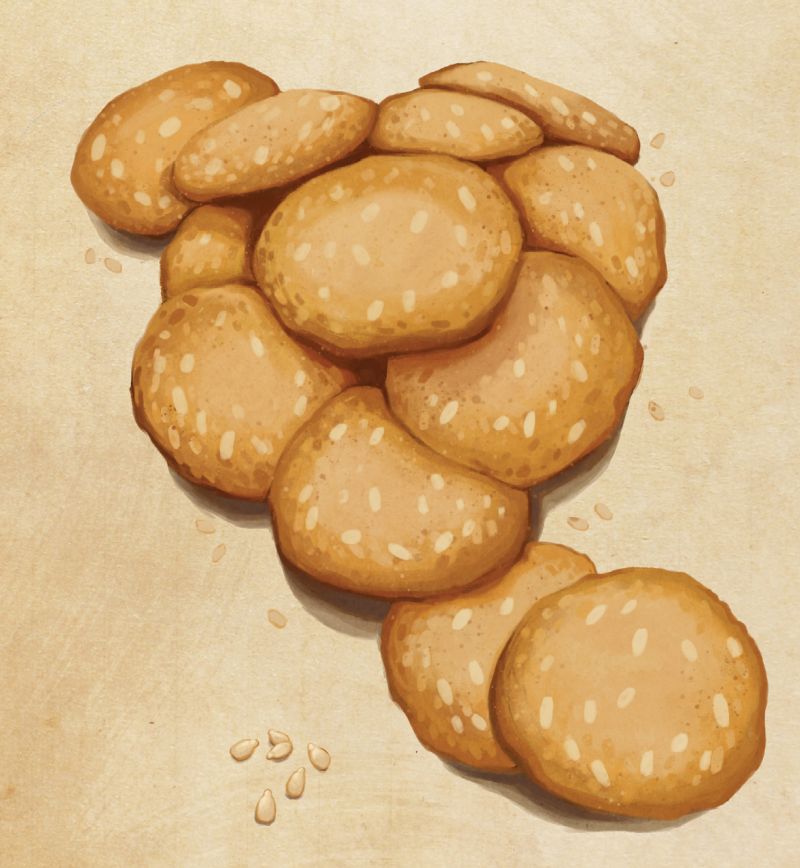 FORTUNE COOKIE
In Africa, the benne plant was thought to bring good luck and ward off evil, which is doubtlessly one of the reasons it was so widely grown by African-American slaves in their gardens. The Gullah people called it the “goodwill” plant, and, even today, the wafers are said to bring good fortune to those who eat them.

OPEN SESAME
Benne (pronounced “bennie”) is a West African word for sesame, a tall, flowering annual (Sesamum indicum) brought to our shores via the Trans-Atlantic Slave Trade. The seeds have a nutty taste (enhanced when they are roasted) and are used in cooking much the same way as nuts. The oil pressed from them is also incorporated into culinary traditions worldwide.

COCKTAIL CRISP
The benne wafer is primarily known today as a sweet confection, but it has a cousin of the same name that’s made without sugar and traditionally served as a canapé. It’s as common at Charleston cocktail parties as cheese straws and shrimp paste.

OUT OF AFRICA
A principal food crop in Africa, benne grew easily in Lowcountry soil and became a staple in the small, domestic gardens planted by plantation slaves. In the 1730s, colonists hoped to turn it into a money crop. While this endeavor ultimately took a back seat to indigo and rice farming, benne seeds, like other African imports such as peanuts, okra, and black-eyed peas, gradually became part of the area’s cuisine.

NEVER TOO RICH OR TOO THIN
The true Charleston benne wafer is almost paper thin—a translucent golden disk no larger than a silver dollar that’s steeped with the rich flavors of sugar, butter, and roasted benne seeds. Benne cookies, made with more flour, are larger and denser but boast the same sweet taste.

TASTE OF THE TOWN
With the rise of tourism in the early 20th century, these treats surged in popularity—visitors were enchanted by their subtle flavor and interested in their history. Sold in hotel gift shops and made by local bakeries such as Olde Colony on King Street, a box of benne wafers was (and still is) a part of Charleston visitors could take home with them.