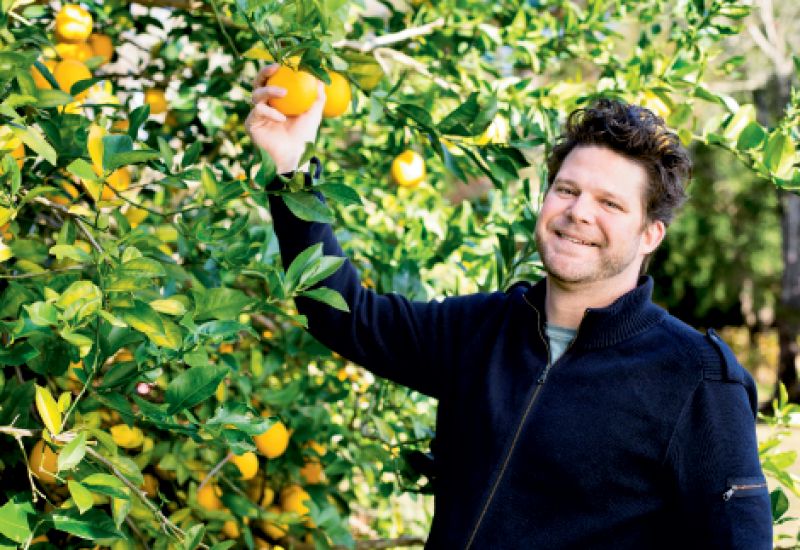 I can’t remember the first time I had a Meyer lemon, but I do remember having a scone with a Meyer lemon curd—and I was hooked,” says John Ondo, chef/co-owner of Lana, a European-styled restaurant in the Cannonborough-Elliottborough neighborhood.

A mandarin-lemon hybrid, the Meyer lemon was discovered in Beijing by USDA horticultural expert Frank N. Meyer, who brought it back to this country in 1908. Struck by a virus in the 1940s, Meyer lemon trees were banned in many of California’s citrus-producing regions until University of California, Riverside, debuted the disease-free “Improved Meyer Lemon” in 1970. Still, for a long time, if you wanted the lemons, you had them sent from a West Coast friend. Their thin skin made them just too fragile for the big commercial growers.

Standing under one of Sidi Limehouse’s towering trees, Ondo pondered sourcing the much-desired fruit. “I buy mine from Sidi. I don’t know anyone with a Meyer lemon tree, and there is no chance of me ever growing one. I can’t garden; even my weeds die!” he says. Truth be told, Meyer lemon trees abound across Charleston County, a part of the 3,000-plus citrus trees in the state reported in a 2012 USDA survey. A compact version can also be spotted on many a Charleston piazza.

“Meyer lemons are larger and much sweeter than ordinary lemons,” says Ondo. “And they’re very floral. Meyers deliver perfume, not pucker.” Often described as having the bouquet of bergamot, another fragrant citrus, the Meyer lemon’s color begins as a light yellow, goes golden, and sometimes even attains a slight orange hue.

Preserved lemons are a hallmark of Mediterranean cuisine, which is Ondo’s focus at Lana. His crew routinely puts up as many jars as they can store, packing them in oil to give them months of refrigerated life. He especially likes preserved lemon risotto because it is so versatile. “It’s elegant yet comforting, and the floral notes of the Meyer lemons really brighten it up. You could place a piece of fish on it—or maybe some seared scallops—and have a stellar dinner. Or you could have it with just a salad. Pair it with an Albariño, a Grűner Veltliner, or possibly a dry rosé.”

Perhaps recapturing his initial delight with lemon curd, Ondo created Lana’s signature Meyer lemon tart. “It’s one of my all-time favorite desserts,” he says. “It’s not too sweet or too rich. The buttery crust tastes like your grandmother’s butter cookies; the custard is smooth and contrasts with the crumble of the crust. It’s the best way to end a meal.”
Those into foraging might find a bough of Meyer lemons peeking over a peninsula wall. The rest of us, like Ondo, will head out to the John’s Island roadside stand that Louise Bennett and Sidi Limehouse stock with produce and flowers from their Rosebank Farms orchards and fields.