Wood Stork
March 2015
WRITER:
Suzannah Smith Miles
Meet the bird you’ve seen wading in local marshes and lowlands: the American wood stork (Mycteria americana), which also goes by the name of “wood ibis.” The only stork to breed in the United States, this species is spotted from Florida to the Carolinas, easily recognized by its bald head and long, grey, down-turned beak. When in flight, the bird soars with its neck outstretched, the black feathers at its wing tips making it identifiable from the smaller but similar-looking white ibis. Learn about this once-endangered (and still threatened) creature and why it’s increasingly moving into the Lowcountry 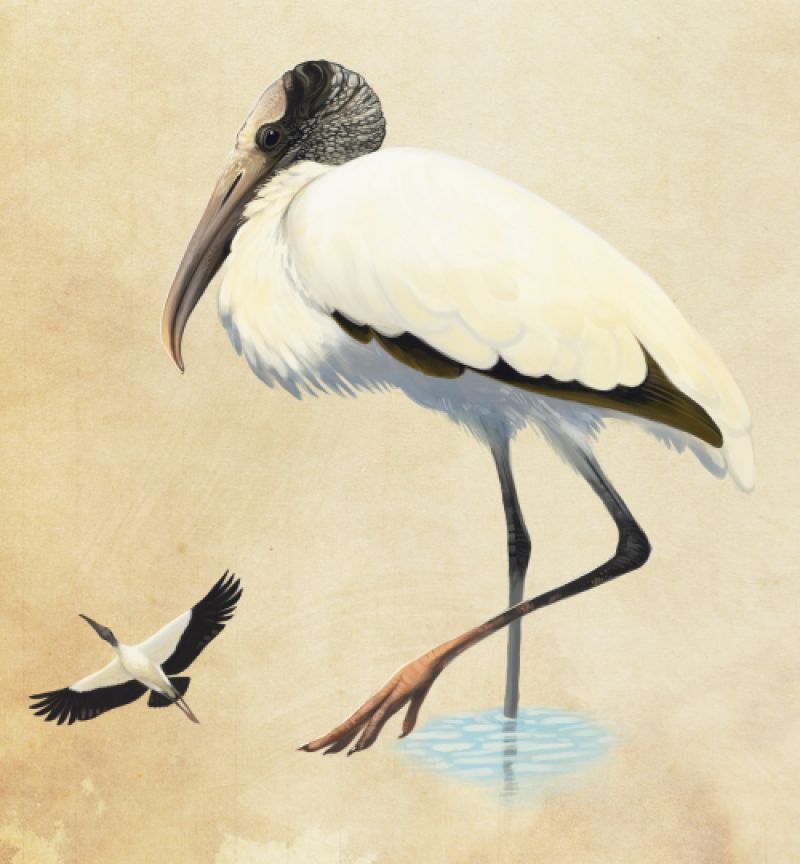 High Expectations
Standing some three feet tall with a five-foot wingspan, an adult wood stork is the largest wading bird native to America. Its body is all white except for black flight feathers at the tips of its wings, while its most distinctive feature, a bare head and neck slate grey in color, inspired the common name “flinthead.”

Fresh Catchers
These creatures employ a unique fishing method. Standing in the shallows, they open their long bills underwater, and when a fish swims by—snap! An adult consumes about one pound of its favorite fare per day, and a nesting pair with two fledglings generally downs more than 400 pounds of it during a single breeding season.

Saving the Stork
Thanks to a 30-year conservation effort, these majestic birds were removed from the endangered species list in June of 2014, though they are still considered threatened.

Gotta Eat
Wood storks primarily feed in shallow waters and will frequently change roosting sites in search of nourishment. While Florida has the largest population of the species, over the last 45 years, the loss of nesting and feeding areas there—due to the impacts of drainage and development—has led the birds to seek better habitats in coastal Georgia and the Carolinas.

Up in Numbers
In 2013, South Carolina had 21 wood stork colonies (six in Charleston County), comprised of 2,020 nesting pairs—a significant increase from the single colony of 11 pairs recorded in 1981.

Flocking Together
Wood storks are sociable creatures who feed in flocks and nest in large colonies called ”rookeries.” They build their nests in trees overlooking cypress swamps, salt marshes, and impoundments such as former rice fields. In ideal situations, a colony may contain up to 10,000 nests.