The Hiss of Hot Summer 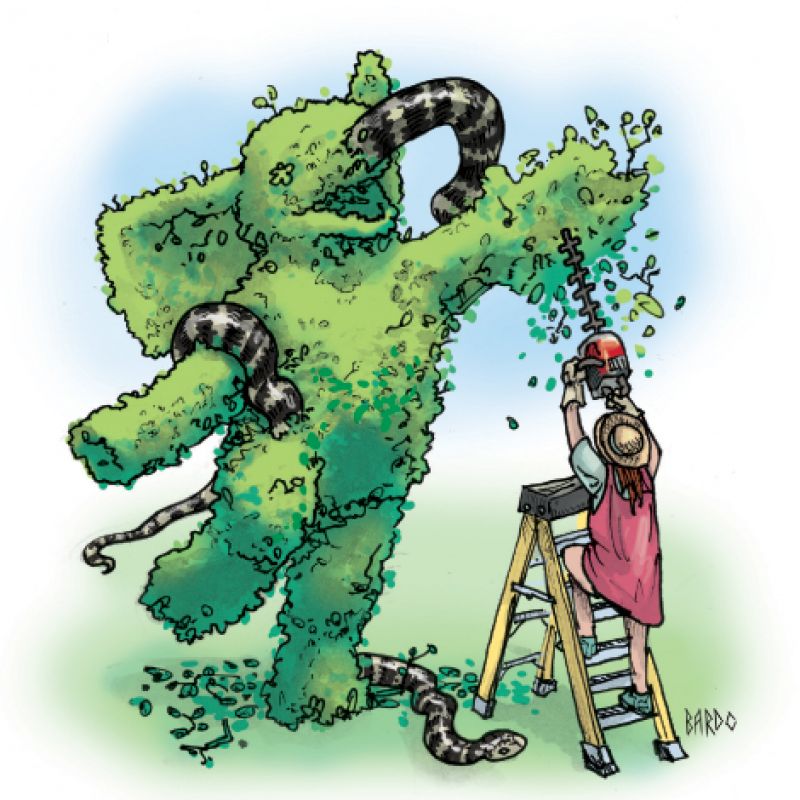 I must admit it took me a little while to get accustomed to summers in the Lowcountry. As a native Detroiter who spent many years in New York City, I am familiar with heat, humidity, and cockroaches, but moving here took them all up a notch. During a summer in Charleston, one learns to change clothes several times a day, for the humid breezes carry as much water as a swimming pool. I learned to adjust: I walk the dog after sunset, park my car in the shade, cast off banana spiders’ webs with panache, and give the gators respectful distance. But I’m still grappling with one staple of a Lowcountry summer that is far more troubling.


Every year, a family of swifts nests in my chimney and proceeds to raise a passel of noisy baby birds. We usually spend a few weeks accommodating their chatter while we have cocktails in the living room, until late July when they will fly away to some chimney in South America or somewhere. But last summer was different. One Sunday morning in June, I realized the nest was suddenly quiet, much earlier than usual. That’s when I spied a giant snake slithering down into my fireplace with a big lump in his middle the size of a bird’s nest. His eyes were on me, his next victim.


This is one element of Southern summers to which I was—and still am—decidedly unaccustomed. Up North, you simply don’t have snakes creeping into your fireplaces, garages, and gardens; slithering around the driveway; and sunning on the dock. It doesn’t even matter whether they’re poisonous or not. It just matters that they’re there.


My then-boyfriend dutifully chopped up the fireplace snake with a flat-tipped shovel, while I cowered upstairs in a corner, my arms around the two dogs who were, as always, oblivious to home invaders of any kind. And, reader, I married that man, a native who proclaimed he had taken care of “Mr. No Shoulders” and proudly displayed all the pieces end to end on the patio. Certain they would meld together and come back to life (hey, worms do it), I made him bury the parts separately in different areas of the yard, like a mobster.


These creatures have helped me prove that I can do a 180 in midair and taught me to never, ever venture into the woods on a summer day. Or even the garage, which I enter with a soothing voice, telling the stalkers that if they are present, I will just collect my rake and be out of their way. I warn any potential snake when I reach into the shrubs to turn on my garden hose: “It’s just me, snakie, I won’t bother you if you just let me turn on the water.” I have learned to simply accept that they are out there, unseen, like ghosts, and living among them is the price of residing here in Eden.


While locals may profess to be unafraid of snakes, sometimes their actions belie their words. Case in point: I went to visit a friend at his vast estate where many gardeners are always at work. Upon leaving the house, I saw a snake coiled in the branches of a small crape myrtle near his front door.


“Snake!” I shouted, just like they yell “Gun!” on Law & Order. “Why, so there is,” my friend drawled nonchalantly, strolling out to his dock. I followed his example, moving on to our planned boat trip as if nothing was amiss. When we returned, however, the entire shrub had been removed from the front entrance. Not just the snake. The whole tree. Some unspoken message evidently had been transmitted between him and one of his gardeners. And the snake, of course. But the whole tree? It dawned on me that this model of Southern gentlemanliness had an opinion about snakes as visceral as my own. But it was, perhaps, “just not done” to admit to such a thing. No one ignores the pink elephant in a room better than a Southerner.


So, a word of warning from a transplant, because many locals don’t think it’s polite to mention: Forget the heat, the gators, and the mosquitoes. Instead, keep your eye on the sparrow, because when he’s gone, that means something ate him. And that something is likely still lurking nearby.