The Dish
December 2009
PHOTOGRAPHER:
Christopher Nelson
The Lowcountry’s own shrimp and grits puts the home in hominy 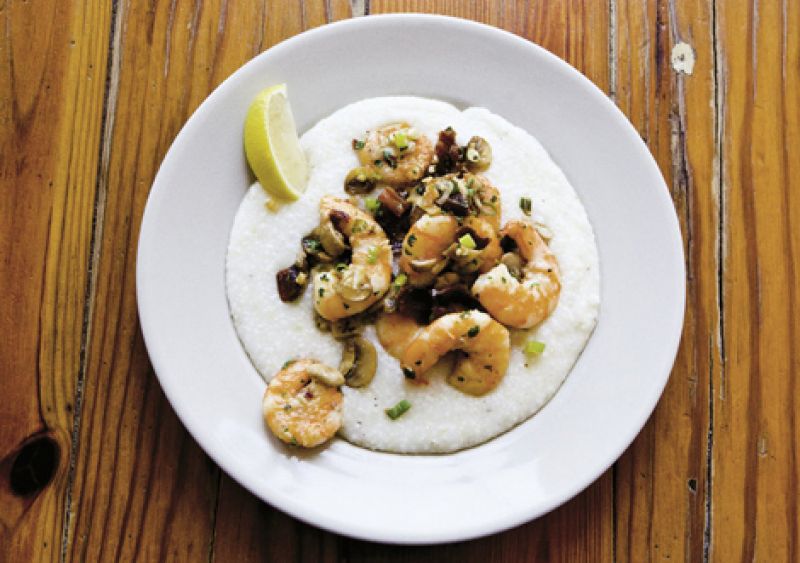 Having written a book titled Shrimp and Grits and traveled the world over to promote it, I have heard stories about the renowned dish—and variations on its ingredients. In Ecuador, I had grits with seviche and a corn that is much like popcorn kernels. In California, South Carolina’s own Anson Mills grits were served everywhere (and treated like gold), from The French Laundry to a chic vegetarian restaurant, but never with shrimp.

This fall, at an Upstate book signing in Newberry, South Carolina, a woman in the audience said, “We used to have canned salmon and grits every Friday night—we’d mush the salmon up in the grits, and it was delicious.” The fellow next to her added, “Well, we did shad in season. We’d use the roe for one thing and cut up the cooked shad and mix it with the grits.” My husband—who is from North, South Carolina, 90 miles southeast of Due West—says his mother made herring and grits for breakfast. I’ve even heard of gefilte fish and grits, though I can’t wrap my mind (or my stomach) around that one.

In my opinion, shrimp and grits beats them all. By way of definition, what is now known as grits everywhere else has always been called hominy in the Lowcountry, where it has been served with shrimp for at least 125 years. It started, we think, with creek shrimp—so tender and young they could be eaten, head and all, without peeling. What could be easier than starting a pot of grits in salty marsh water, covering it and turning it low, then going out with a seine and scooping up some of the crustaceans while watching the tide rise with the sun? By the time you got back to the house, the grits would be done just enough to cling to the teeth but not so much as to stick between them. The drained shrimp were sautéd in butter, melted and foaming, or tossed directly into the hot grits to cook; a bit of salt and pepper completed the meal.

Gradually, of course, shrimp and grits came to be eaten any time of day, and anything in the kitchen would be added—garlic pulled from the garden, dried, and chopped with fresh tomatoes, green onions, and a little leftover
bacon; perhaps cream, milk, or cheese; or some country sausage. Andouille was most likely added by some Cajuns, along with hot sauce, from the shores of Louisiana. These days, chefs embellish even more, with lobster, hollandaise, buerre blancs, mushrooms, and truffles.

Leftover grits form soufflés and platforms like cakes and triangles for even more shrimp or other handy ingredients. As always, nothing goes to waste in the Lowcountry kitchen. But truth be told, when the grits are good and the shrimp quiveringly fresh, nothing is better than the original dish.

<p>Originally titled “Shrimps and Hominy” in the 1930 edition of Two Hundred Years of Charleston Cooking, this is the earliest recipe we could find. It was attributed to a man who said he had been eating shrimp and hominy every morning during the shrimp season for 78 years and never tired of it. The name of this recipe was changed to “Breakfast Shrimp and Grits” in the 1976 edition of the same book. We’ve adapted it to today’s language, but the ingredients remain the same. Of course, it is implied that the shrimp are fresh, wild American shrimp.</p>

RELATED ARTICLES:
Hail to the Chef
Tops in His Field
Resources: