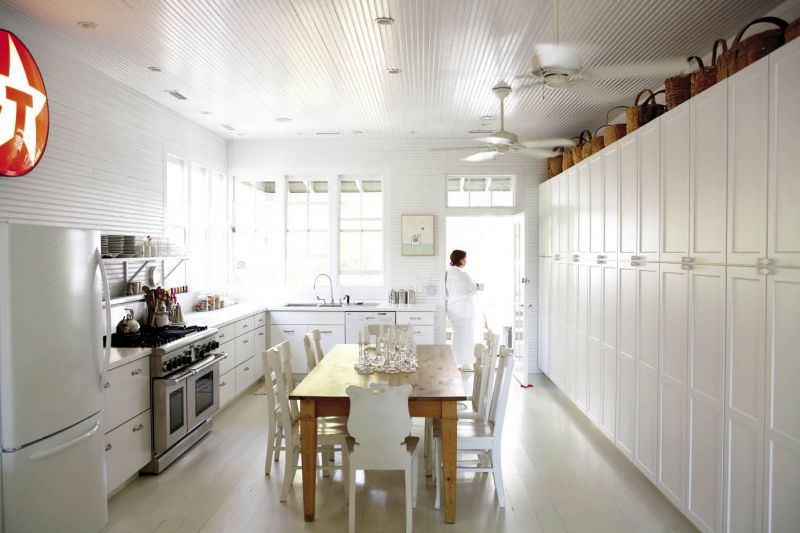 When you step into Judy and Fred Reinhard’s 1895 cottage on Sullivan’s Island, the thing that first strikes you isn’t its wonderfully modest scale, its refreshing stark white interior, nor its abundantly light-filled great room. Rather, you tune 100 percent into Fred’s glass beach treasure lamp. A rotund orb topped with a nondescript white shade, it’s filled with the jolly trove of confetti-colored trinkets, baubles, toys, and geegaws that he’s found on his morning beach jogs.

“Isn’t it great?” says Judy in a throaty voice that’s pretty much Suzanne Pleshette reincarnated. “They first were in a basket, but Fred didn’t want to share his toys, so we started the lamp. Now the grandkids get to add what they find to it, and they get really excited about that.”

If the Reinhards seem serious about their toys it’s because they are serious about play: from the red footprint-shaped doorstop by the back door to the red scrubber folk by the sink, there are tongue-in-chic nods to playful design throughout the house. And maybe they’re serious, too, because that stout lamp of beach treasures more or less led them to their island life.

Back in 1995, the long-married couple was running their popular King Street shop, Fred. Complementary, charming opposites to the core (he moves slow and steady and speaks in measured sentences; she’s delightfully loquacious; he sports a silver-haired buzz cut; she wears Pippi Longstocking pigtails), they had nearly finished renovating their 1894 Anson Street Goldsmith’s Row house. Sunday mornings, they’d head out to Sullivan’s Island, where Fred would jog along the beach and Judy would set up a picnic brunch. “We’d hang out there until about noon or so, and it would feel like a mini-vacation,” says Judy.

Soon enough, they began lingering longer and longer on the island and added house-shopping to the Sunday ritual. Tooling around on their bikes, they came across an overgrown place at the corner of I’On and Station 28 ½ with a “For Sale” sign out front. Worse for the wear following Hugo, it had racked eight inches in the storm, sustained water damage to the ground floor, and wore a leaking roof, rotting porches, and pipe-railed concrete steps.

“It was this funny little house,” says Judy, whose tortoise-shell specs sport a hint of paint at the hinges, “and completely overgrown.”

“But,” adds Fred, “this house is classic Sullivan’s Island style: a basic rectangular, simple house with a gabled roof, a tower on one side toward the back over a bedroom, and another on the opposite side. There was an infill porch on the back between them, and it had a second, wraparound porch that reached from one tower to the front of the house, across its face, then back around to the other tower.”

“We walked around it,” continues Judy, “and said, ‘Now this is what a beach cottage is supposed to look like.’”

The pair (roll-up-your-sleeves veterans with several rehab success stories under their belts) was craving a new project, and this intensely neglected beauty at their favorite haunt seemed perfect. Though the house had sat on the market for more than two years, the Reinhards’ lowball offer was challenged by another party who was willing to dole out the asking price in cash. “But we were going to rescue the house,” Fred says, “and they were going to tear it down and build fresh. In the end, the owner chose us.”

So in the 10-plus years thereafter, the Reinhards’ weekends were consumed (happily, they say) with demolition and dumpster days and structural, carpentry, electrical, and paint work. With the two of them (and their sons and daughters-in-law) as workhorses—Fred has an architectural engineering background, Judy an affinity for Euro-smart simple design—the project moved along steadily and in style, but not to the point that the family couldn’t enjoy themselves and the island. “First, we made it habitable,” says Judy, “and then we were able to spend weekends and summers out here.”

The mammoth “before” house album testifies to the laborious rebirth and the Reinhards’ sweat equity. Photos of smashed interior walls, a gutted bathroom, a makeshift kitchen; close-ups of rotten joists, peeled-back linoleum, and stripped doors and windows fill the pages. Tucked amidst the chaos sits a funny little shot of a buffet, complete with tasty bites and even a small pot of flowers—an image that reflects their commitment to quality of life in any condition. Soon, the home’s in-progress look was so enviable, Coastal Living photographed the habitable parts, peeling paint, casual white-sheet-slipcovers and all, for a feature. And last year, for the 10th anniversary of the magazine, readers voted it one of their favorite getaways published.

The finished result is just as charming. A fresher-faced, polished cousin to that which made its national debut, today the home is a true retreat with few major projects left to tackle. The place, once a boarding house with bedrooms off a central corridor, a cave-like, ground-floor kitchen, and tiny, grubby bathroom, is now the Reinhards’ full-time home. By March 2006, they had closed the shop downtown, moved out of their Ansonborough house, and settled into their Sullivan’s Island haven to fully enjoy the makeover.

They had opened one side of the interior to create an expansive kitchen-living room combo; bumped out the back porch (and scored a new attic in the doing); and added a small, two-bedroom, one-bath bunkhouse in the back. Beadboard (running
alternately horizontally and vertically as it did in the original house) covers the walls and ceilings; antique ceramic doorknobs appear here and there; rehabilitated shutters punctuate the wraparound porch; the floors, once mismatched stains of wood, are now a pristine white; a fresh tin roof caps everything off; and ceiling fans spin lazily inside.

As for the all-white interior, that palette has followed the Reinhards from house to store to house. “I don’t know,” says Judy, “it’s always been something I gravitate toward. The light it gives off in this house in particular is just fantastic. I love how it makes me feel, don’t you love it?” Fred, with a mischievous I-will-not-gush grin that teases Judy’s ebullient one, looks around their big beach treasure, twinkles in spite of himself, and says, “It’s just a great place to live.”

White décor has ruled the past few Reinhard roosts. Here’s why it works for them:

It marries varying textures, shapes, and building materials of the past with those of today.

Uniform white linens (sheets, quilts, and towels) need only be bleached and washed, and can then be put in any room or bath in the house.

A collection of disparate shaped chairs becomes uniform with a coat of white paint.