Spottail Bass
November 2015
WRITER:
Suzannah Smith Miles
Lowcountry anglers will tell you that fall’s the best time to cast for Sciaenops ocellatus, the state’s most popular saltwater game fish. Esteemed for its fresh, clean taste and renowned for its fight, this coveted creature goes by many names, including spottail bass, channel bass, redfish, red drum, and puppy drum. No matter what you call it, you’re sure to thrill at the sight of its reddish-bronze rear-end ”tailing” in creeks, rivers, and surf as it feeds, showing off a distinctive spot on the base of its caudal fin 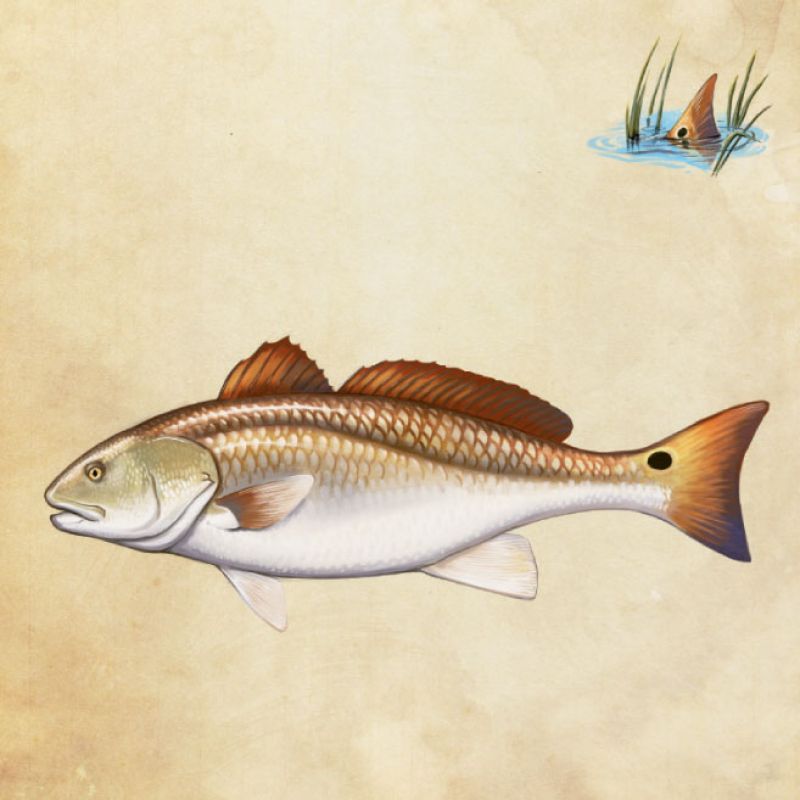 Seeing Spots
Scientists believe that the large spot at the base of the caudal (or tail) fin fools predators into attacking the tail rather than the head, giving the animal a better chance of survival. Occasionally, a fish has multiple spots, and in rare cases, none at all.

See Spot Grow
Mature spottail spawn in August and September, with the female laying some 1.5 million eggs at a time. Growing fast, a fish is 12 inches long by age one. By maturity (three or four years old), it’s often 27 to 36 inches, weighing six to eight pounds. The largest on record in South Carolina is a 75-pounder caught in 1965. The oldest on record? About 38, though sexagenerians have been reported in other states.

Hear Spot Drum
The nickname of “drum fish” comes from the low, croaking sound males use to attract females to spawning sites. They create the noise by contracting muscles attached to an internal organ called a “swim bladder” that aids in buoyancy. In the mid-1700s, Drum Island in Charleston Harbor was named for the large number of the fish in surrounding waters.

See Spot Tail
These drum family members are known for “tailing.” Their tails stick out of the water as they feed along the bottoms of creeks, oyster reefs, beaches, and salt marshes. What are they so busily dining on? Adults eat menhaden, spot, anchovies, and blue and speckled crabs, while juveniles go for crustaceans, such as fiddler crabs, as well as smaller fish.

SPOT PROTECTION
To keep the species healthy, area fishermen are only allowed to take home three per day, and they must be between 15 and 23 inches long. And as a Designated State Gamefish, spottails caught in South Carolina waters may not be sold.

This forbidding-looking structure at 21 Magazine Street holds a darker, more haunting side of Charleston history. Surrounded by a high brick wall, with windows grated with double rows of bars, the Charleston District Jail first opened in 1802 and remained operational until 1939.