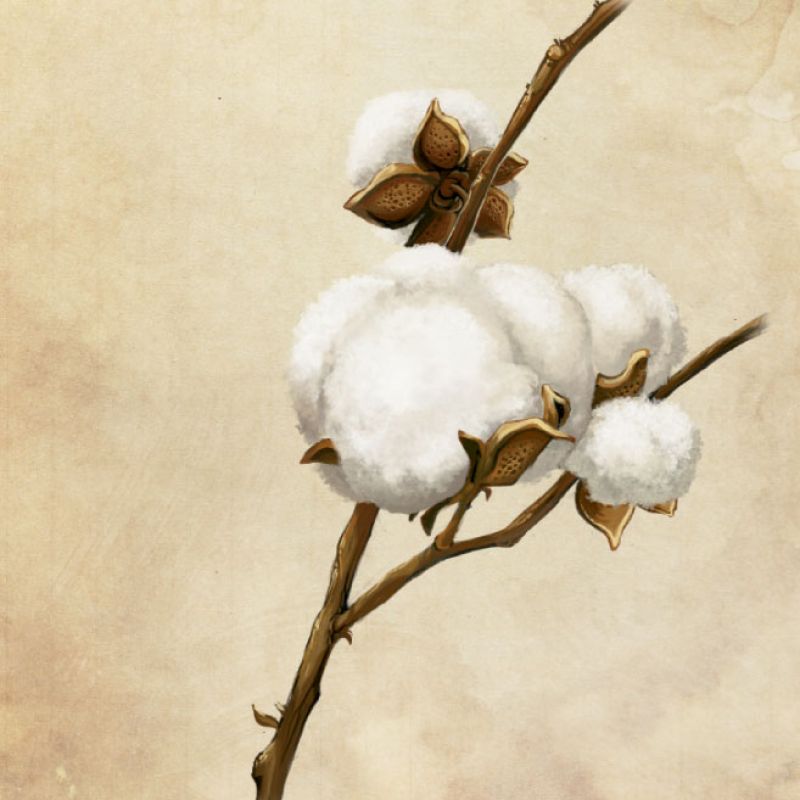 This silky, extra-long-staple cotton (Gossypium barbadense) gets its name from the Lowcountry Sea Islands where it famously flourished, becoming esteemed the world over for its deluxe quality. In the 1780s, it was introduced from the Caribbean to replace the declining trade in indigo, and by the early 1800s, millions of pounds were being exported yearly, sent from Charleston by the shipload to textile manufacturers in the North and across the ocean to England, France, and Europe. The crop brought tremendous wealth to island planters, whose slaves did the arduous labor of growing and preparing it for sale. It’s much less abundant today, but the name “Sea Island cotton” remains synonymous with soft luxury

Noble Seed  While cotton was king of the crops throughout the South, the Sea Island variety was noblest of all, set apart for its large bolls of long, sleek fibers that were remarkably tough. It thrived in the semi-tropical, sandy-loamed environment of James, John’s, Kiawah, Seabrook, and Edisto islands, and, further south, Hilton Head and St. Helena.

Bags to Riches Once the cotton was picked, it went through various stages of preparation for market, including drying; sorting; ginning; and moting, a final step of removing overlooked seeds or less desirable strands. To prevent damage to the delicate fibers, it was then packed by hand into loose hemp bags. At 7.5 feet tall and 2.5 feet wide, each held some 350 pounds of the crop. In 1855, when cotton was going for about 30 cents a pound, each bale was worth $90-$120 (about $2,500-$3,500 today).

Summer Snow Generally planted between March 20 and April 15, the cotton begins to mature in late June, putting out yellow blooms similar to those of a hibiscus. During this time, the cottonseed is germinated and the “fruit,” or cotton boll, is formed, with its hundreds of tiny fibers made of cellulose. The fluffy white balls make a field look like it’s covered in snow.

White Gold Because buyers were willing to pay higher prices for Sea Island cotton (as much as twice the cost of short-staple cotton), plantation owners eventually began focusing not on quantity but quality. Painstaking measures were taken every year to cultivate the best and strongest seeds as well as improve planting and production methods. Friendly rivalries also emerged between plantation owners as to who had the best quality seed.

Evil Weevil Two things led to the demise of this cash crop. First, the 1870s saw the introduction of a disease called cotton wilt. In the late 1890s, the boll weevil began migrating into the United States from Mexico and infested all the country’s cotton-growing areas within 20 years. By 1930, Sea Island cotton was nearly eradicated.