Spin City
June 2010
WRITER:
Melissa Bigner
One downtown resident gets in gear as she discovers the joy of urban pedaling 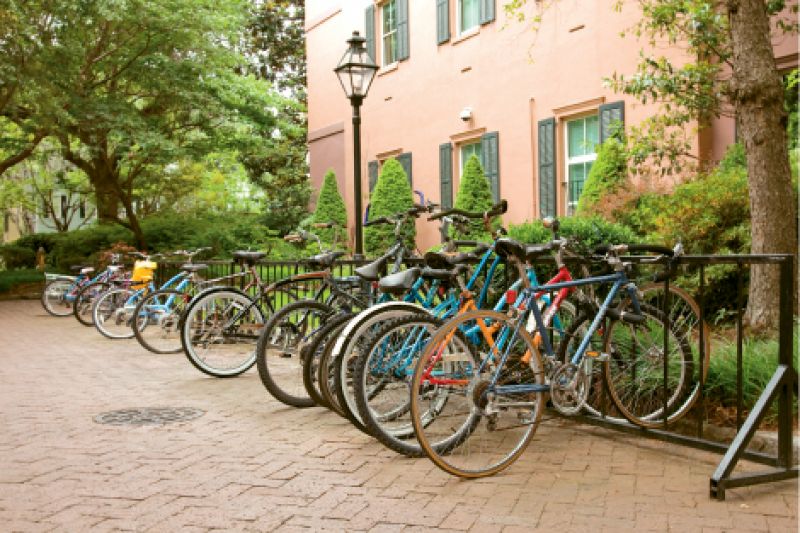 There’s a newlywed couple in my neighborhood who regularly cycles to the park, the Pig, and pretty much anywhere within pedaling distance. Their bikes—British imports with chain guards, mud flaps, back racks, side bags, and cheery bells—match in the same hunter green and wicker basket way he and she match. She wears skirts, he dons a cap, and their hair blows just so. They even smile in sync, and I swear there’s a soundtrack (French?) that trails behind their draft. The sight of this bike-at-all-costs pair rolling along is so charming that its gives me mixed feelings of joy and envy and elation and rider remorse.

I, on the other hand, am more of a fair-weather cycler, having made peace with my caloric retention and being prone to heavy sweat in street clothes. But my proximity to the Crosstown, downtown shops and restaurants, and the farmers market in Marion Square puts me in prime biking territory. And when I last spoke with the couple, we extolled the glory of fresh-air trekking, bikeable zip codes, and this loverly town. Now, I just have to stick to the lifestyle a little more, because, one, I’m never going to turn into one half of a version 2.0 of them if I don’t, and two, I really stink at the hide-and-slink that I inevitably must employ when I spot them at the grocery after having driven three blocks for a gallon of milk.

1. Roll through Hampton Park, where the road closes to traffic on Sunday mornings and Tuesday and Thursday evenings in spring and summer. 2. Taco Boy serves up bike racks galore. 3. Get over the Ravenel Bridge’s 2.7 miles. 4. Register your bike for $1 at the Charleston Police Department. 5. Buy or rent affordable wheels at Unique Transportation. 6. King Street has a lock on several U racks—just look for the bike parking signs. 7. The CARTA bus racks carry up to two bikes while you ride. 8. Newly formed East Bay bike lanes link the Cooper River Bridge and the historic district. 9 & 10. MUSC and CofC have concentrations of bike racks all around their campuses. 11 & 12. Get in gear (buy or rent) at the Bicycle & Outdoor Shoppe (which also offers a free public pump during store hours) or at the Charleston Bicycle Company. 13. Critical Mass takes back the streets with final Friday rides at 5:30 p.m. from Cannon Park. 14. Near the corner of George and Coming sts., find free access to a bike pump affixed outside an office window. 15. Take a spin around Colonial Lake, or head South of Broad to steer clear of heavy traffic. 16. Bike around the Battery, just mind the pedestrians.

Columbia, Greenville, and Spartanburg have all earned Bike Friendly Community Awards from the League of American Cyclists, and while the Holy City is noticeably absent from the list, many local groups are paving the way

Bike Charleston: From where to find bike racks to cycling events, bikecharleston.org

My Bike Law: Enforcing the rules of the road, mybikelaw.com

Google maps now has a “bike there” option when you request directions, maps.google.com