Judging on curb appeal alone, Nancy and Steve Feinberg’s Wraggborough single house is a paradigm of traditional Charleston charm. After all, the handsome 19th-century manse, an example of Classic Revival architecture, is on the National Register of Historic Places, and its façade—protected by a Historic Charleston Foundation (HCF) easement—boasts features typical of the city’s finest older homes. Double-side piazzas, wrought-iron gates, and paneled mahogany shutters with iron cleats are complemented by Confederate jasmine, flickering gas lanterns, and, on the front porch, sheer curtains that float dreamily when they catch the coastal breeze. A plaque telling of the abode’s first occupant—John N. Tidemann, a German immigrant who established a successful grain business here more than a century and a half ago—confirms the historical cachet of the whole tableau. All send the message that the homeowners, a pair of Chicago-based entrepreneurs, dig the Holy City’s particular brand of past-ever-present appeal.

And that’s certainly true. In fact, this house—which the Feinbergs bought a year ago and then restored and renovated with help from Bobby Newman, an area contractor, and Dann Foley, an interior designer out of Palm Springs, California—is the culmination of their love affair with the city, which spans three decades and counting (more on that later). But step inside, and it’s clear that beyond the respectful façade, this is no museum. The eclectic décor pulls from many eras and includes pieces such as midcentury modern chandeliers and recent works by local artists, and the interior layout has been adjusted to better suit a 21st-century lifestyle (the HCF easement only applies to the exterior of the home, which left them free to tweak the interior). Social butterflies, the owners are anything but stuffy—Steve is a self-described “old-time hippie” who attended the first Woodstock, and tunes by folks like Gordon Lightfoot and John Fogerty set a laid-back tone at Nancy’s regular dinner parties—so a strict period home just wouldn’t suit.

“The Feinbergs have a great respect and love for everything that is old, but they’re not pure preservationists,” Foley explains. “Their perspective is very fresh.” Add to this a healthy dose of color (“I’m not a beige guy, and the Feinbergs aren’t beige people either,” he says), and you’ve got an old home outfitted for modern living—which is exactly what Nancy and Steve hoped to find when they started house hunting early last year.

In terms of area real estate, this wasn’t their first rodeo. The duo discovered Charleston in the mid-’80s, when a coworker invited them to spend a week vacationing at her downtown home. Nancy, a Maryland native who grew up visiting storied East Coast cities like Annapolis and Williamsburg, was immediately taken. “An appreciation of the past is part of my DNA,” she says. For his part, Steve, who was raised in Pittsburgh, where he commuted to school and back on foot, was struck by the city’s walkability. “We also liked the changing seasons but moderate weather,” he adds. Fifteen years and many more visits later, they bought a second-floor condo unit in Ansonborough and quickly got in the habit of hightailing it south of the Mason-Dixon for brief escapes from hectic work schedules and the bluster of Midwestern winters. Eventually the Feinbergs realized they’d like to live here more permanently—a goal they’re still working towards—so they sold the condo and went in search of a larger place.

To kick off the process, the couple met with a realtor to discuss their “musts,” noting that outdoor space, a sense of history, and original architectural details were particularly important. They also craved enough square-footage to accommodate a home office, spare rooms for frequent house guests, and zones for larger groups to gather during their regular soirées. Then they flew back to Chicago, directing the agent to call if the right property hit the market. When she buzzed them about the Wraggborough single house a month later, it fit the bill on paper, but they couldn’t get down to Charleston immediately for a tour. Worried it’d get snapped up by another buyer, they took the plunge and made an offer sight unseen.

The risky move paid off. Though the bones of the house needed some updating, they knew they already had the right men for the job: Newman had done great work tackling smaller repairs at their old Ansonborough digs, and Foley had decorated their Chicago abode more than a decade earlier. (“It’s a testament to Dann’s talents that we haven’t changed a thing since he did our last place, because it’s still comfortable and current,” Nancy notes.) With Newman handling the technical details and Foley acting as both interior designer and project manager, the two rolled up their sleeves and set to work. Their first order of business was making the home healthier and more efficient, which meant installing new HVAC, electrical, and plumbing systems. Structural issues had to be addressed, too. “The kitchen and master bath were built by enclosing the original first- and second-floor piazzas, which were never properly supported,” says Nancy. “Bobby had to fix all the sagging beams and cracked braces.”

Once the structure was fortified, Newman and Foley worked together to open up the first-floor layout to allow for better flow. Down came the wall separating the dining area and kitchen, and the interior doorways were expanded to provide a clearer line of sight from the kitchen to the front parlor. “Now, when the Feinbergs are entertaining, they throw open the French doors at the end of the piazza, and they’ve got great indoor-outdoor circulation,” Foley notes. The layout on the third floor was streamlined as well. “Before, when you came up the stairs, you ran right into a ridiculously awkward bathroom,” Foley says. “The commode was turned sideways under the eve, and a dormer window was jutting out over the sink.” Realizing that two full bedroom suites and a bath were too much to cram into the 550-square-foot space, Foley redesigned the guest quarters. His new layout offers one full bedroom, a “sleeping nook” with a daybed to accommodate an additional visitor, and a more comfortable bath to serve all positioned at the end of the hall.

After the structural fixes and layout tweaks were in place, Foley added eclectic décor that reflects the homeowners’ personalities. Bright colors, such as pops of yellow and lush kiwi-green throughout the first floor, set a happy mood and nod to Charleston’s tropical climate. Unexpected touches, such as the stair runner made from several antique and reproduction rugs sewn together, feel fresh in a way that suits the fun-loving couple. Steve loves the second-floor office and lounge, where his guitar is prominently displayed as functional art and some of his favorite ’70s albums (think Carly Simon’s greatest hits, Bob Dylan’s Nashville Skyline) hang above the fireplace. And mementos—such as prayer screens, foo dog statues, and other Asian artworks—collected on frequent work trips to Hong Kong add additional special touches throughout.

Though the couple wasn’t afraid to modernize, they also ensured the home’s good bones were well preserved. For example, fireplaces were updated with aluminum liners to prevent the mortar between the bricks from crumbling, but the existing mantels remain. And when Newman had to replace damaged wooden foor joists, he had them planed, then repurposed as floorboards. The wood was a perfect match for filling in the gap where the wall between the kitchen and dining room had been. “There’s lots of old and new, and it all works together to make a statement about who they are,” Foley notes.

With the seven-month reno complete, the Feinbergs look forward to spending more time relaxing in the Holy City. “I can’t wait to live the Charleston lifestyle full-time,” Steve notes. “I just want to immerse myself in the city, smell the jasmine, eat biscuits, and enjoy the sunshine.” 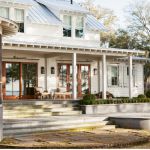 At Home on the River